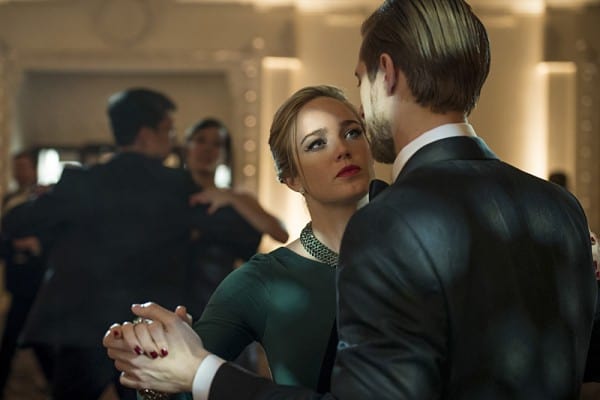 “Blood Ties” finds time for bombastic action and strong character work, but also highlights one of the show’s central problems: its premise. Legends of Tomorrow, in complete contrast to its CW cousins Arrow and The Flash (and, in fact, every other comic-book show on TV right now), is structured as a sort of treasure hunt, with Vandal Savage as the prize the team is after. The writing team is ably finding ways to stretch and expand the storyline (for example, delving into the characters’ past selves and past lives), but each episode increasingly feels like a deft workaround for the fact that the concept is essentially Catch Me If You Can in time and space. Unlike the Flash and Arrow teams, the purpose of the Legends team is not to fight evil in all its forms, in a constantly-changing landscape of enemies and threats. Instead, they fight it in one form: Vandal Savage.  It’s all Savage, all the time, and because the scope’s more limited, there’s a risk of repetition or a lack of stakes.

This week’s “Blood Ties”  dealth with the issue skillfully, at least, by pointing out that the evil represented by Vandal Savage doesn’t lie just in the man himself, but in his power and assets – specifically, as Sara says, his money. The team splits into three groups, as Snart, Rory, and a reluctantly-drafted Jefferson head off on their own initiative to steal an emerald, Ray and Professor Stein attempt to extract deadly knife shards working their way toward Kendra’s heart, and Rip and Sara infiltrate the bank they believe holds Savage’s fortune.

Once at the bank, things rapidly devolve for the fabulously-dressed Rip and Sara (more role-playing for all the characters please!), leading to a fantastic action sequence for Caity Lotz in which she uses only her knives to take down an entire group of well-armed men. It’s a stunning, and convincingly delivered, scene – Caity Lotz’s real-life background in parkour and martial arts shines through and lends an authenticity to her action scenes that can be felt. Rip assists, and in our first real glimpse at his hand-to-hand skills, turns out to have a shambling, creative competency that fits his character. The two later infiltrate a formal party on the hunt for Savage and for Carter’s body, and the episode hints strongly at the development of a future romance between them (dear fandom: consider “Hunter Canary” for their couple name).

More importantly, however, the Rip/Sara sequences highlight Sara’s intense inner struggle between who she wants to be and the bloodlust-driven killer she’s afraid she is. Lotz imbues Sara with both vulnerability and intensity, and her self-hatred over her deadly impulses, combined with her refusal to step back from her role and abilities as a trained fighter, make her a compelling character.

The episode explores the private pain of two other team members as well. Professor Stein, accurately pinpointing Ray’s self-doubt underneath the easy braggadocio, confronts him about his past as they fight for Kendra’s life. The timing of the events makes little sense – one moment there seems to be not a moment to be lost or Kendra will die, and the next the two men have time for a long heart-to-heart – but it gives much-needed depth to the character of Ray Palmer. The facade of the brilliant, wealthy scientist/CEO fades away and the boyish, grieving young man peeps through. Victor Garber, saddled with thankless dialogue, suffuses Stein with a compassion and certainty that Palmer responds to, and it’s a sweet moment of bonding for what’s becoming a mentor-mentee relationship. 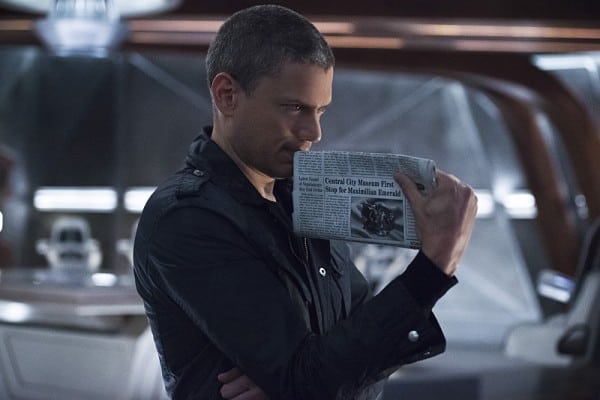 Leonard Snart, meanwhile, faces his own demons in the form of both his father and his childhood self. Neither Arrow nor Legends, to their immense credit, has shied away from portraying Snart as a deeply troubled character, and in specifically addressing the level and type of childhood abuse that shaped him. Which gives an immense pathos to the moment when he must confront the fact that there is a certain inevitability to both evil and time, that his memories of fear and anger and abuse still exist, because that past still exists. Wentworth Miller has always given Snart a charismatic, chip-on-his-shoulder likability, and deepens him here to reveal the complexity always present. It’s an incredibly bittersweet (and well-written) moment when he advises his younger self to look after his own mind and heart, and always take care of himself.

All the Legends, to one extent or another, are seeking to change the past or the future so as to change who they are in the present – Rip, Ray, and Sara, seeking to save the future so as to wipe out the sins of their past;  Leonard and Mick, driven by a thieves’ greed yet also the faint hope of becoming something more; Jefferson, Professor Stein, and Kendra, looking for purpose and something to belong to. Unease with one’s choices and one’s self is a recurring theme in Legends – which is perhaps why it is increasingly cathartic and joyful when each character steps up however briefly into who they are and into their role as part of a team. When Leonard, Mick, and Jefferson – the three with the least at stake – risk their lives and come blasting into the room to save Rip and Sara from Savage, it’s a satisfying moment of team solidarity. And the group battle that follows, something the show positively excels at, is satisfying on multiple other levels.

“Blood Ties” has strong emotional beats and blistering action. The show as a whole just needs to build out greater structure in the enemies and threats facing the team. The cult-like Savage organization introduced here could be an important development in this arena. Something as large and organized as say, Hydra could certainly help the show’s villain problem.  Alternately, adding some recurring villains who are not Savage would up the ante as far as threats go. This is a fast-paced episode that hits so many strong notes that it buries the obvious issues at the show’s core.

I foresee lots of scenes in future of Jax/Jefferson fixing the ship.  Gideon’s artificial intelligence aside, Jax is a mechanic, people, and them’s real skills.

Wentworth Miller has said in an interview that there is a flirtation between Leonard and Sara, and that’s the pairing I want. Their “ship” name practically writes itself – Captain Canary. However, I also like Rip/Sara, and if the show decides to go that route, or a love triangle route, bring it on, with extra banter and angst.

“Exactly how many knives do you have?”

Jefferson: “Is there anything you think about other than yourself?” Leonard: “Yes. Money.”