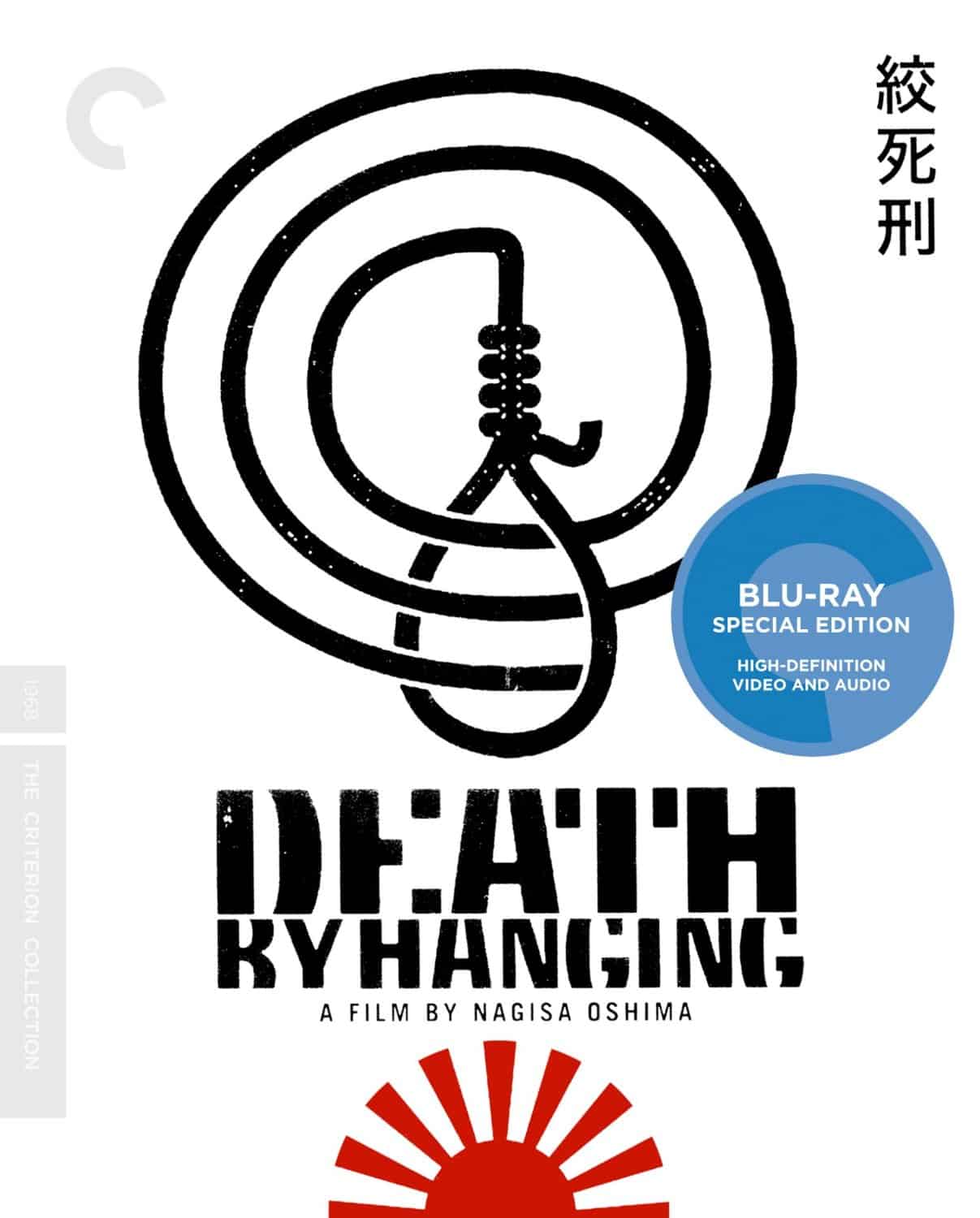 At the start of Nagisa Ôshima’s Death by Hanging, a narrator (Ôshima) begins a treatise on the death penalty, citing public polls on the issue before gradually taking us into a replicated Japanese holding area where a man is about to be executed. The narrator covers the details of the execution procedure, the features of the facility, and the exquisitely prepared process in general. We see the condemned being led to the hanging noose, his disturbing, quivering struggle a powerful contrast to the witnesses who blankly look on, as well as the clinical, matter of fact descriptions and the technique itself, which is enacted with the precision of detached routine. The convict is positioned, the trap door is opened, he falls and hangs to his death.

But he does not die. Even after the expected allotment of time, and though he is unconscious, his heartbeat has not faltered. The authorities, who are by this point wholly perplexed, check the mechanism and pass the blame. Should they try again? Can the man have another prayer? No, says the priest, he already received last communion. This strange occurrence has entered new legal territory. They can’t, after all, execute someone who is mentally incapacitated. The priest argues that this isn’t even the same man, since his soul has already departed. Issues pertaining to ethics, morality, science, and law and order are all called into question, even when they seemingly contradict one another—“They’re trying to revive him so they can kill him,” explains one of the administrators. 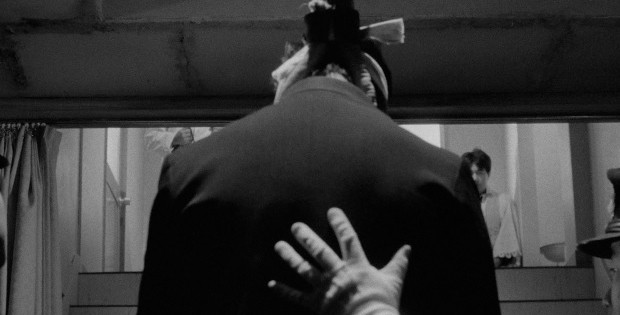 This has been the first 15 minutes of a nearly two-hour long film. As Death by Hanging continues, the frenetic pace dissipates somewhat, as things slow down and all involved attempt to rationalize what just transpired. Problems of identity arise, as the convict, referred to only as “R” (Do-yun Yu), wakes in an amnesiac state and cannot (or will not) acknowledge his self, and consequently, his crimes. In order to elucidate upon whom R is, the men begin to comically dramatize an assortment of scenarios, all acted out with zeal, as they try to jog the convict’s memory. (Hereafter, some even differentiate between “R” and “not-R,” suggesting a clear split in his character.) In the explanations of such abstruse terms as “carnal desire” or the definition of “family,” the film, through these men, is essentially interpreting the defining features of an individual, what they do and why, uncharted waters for personnel who are used to merely doing their pitiless job without any consideration for the context.

R is guilty of rape and murder, a fact that gets rather obfuscated as the movie becomes more interested in the why and how of his actions. In a valiant, if occasionally ridiculous, struggle to understand and illuminate the actions of the criminal, the men depict various presumed situations from R’s past, attempting to rationalize and resolve his predicament and what led up to it, exploring avenues of potential psychological, behavioral, or social motivation. Like a Japanese Whose Line Is It Anyway, the men spontaneously play various parts with great gusto, particularly the vigorously animated Education Chief (Fumio Watanabe). As they set up a makeshift stage, a hilariously absurd routine of prop-less improv develops, with the players falling all over themselves with assorted theatrical difficulties, from calls for a different scene to act out when one doesn’t go as planned to arguments concerning motivation: “I can’t get into the role if you don’t act more Korean.” 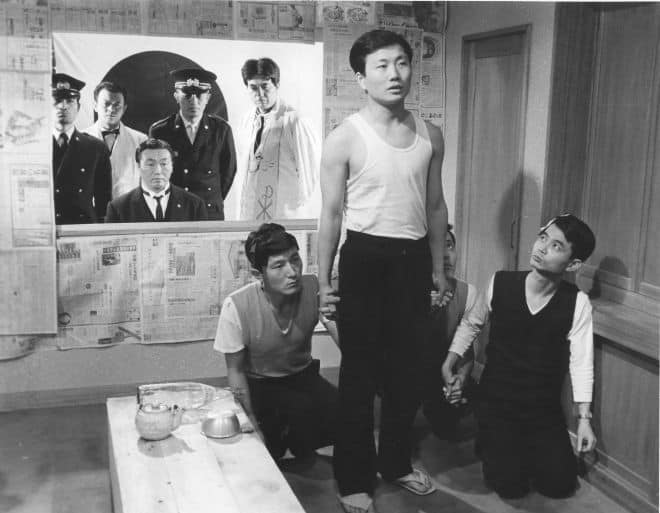 When their exploits fail, R himself tries to reenact all he has been told he did. At one point near the hour mark, he exits the room and somehow enters a city street, with the officials and witnesses following in line. They are now about to observe the exact conditions of the assault; some will again merely look on, some will narrate and guide the action, some, quite revealingly, will jump right in and, in a sense, take part in the crime. This is where Death by Hanging shifts to its most self-conscious. 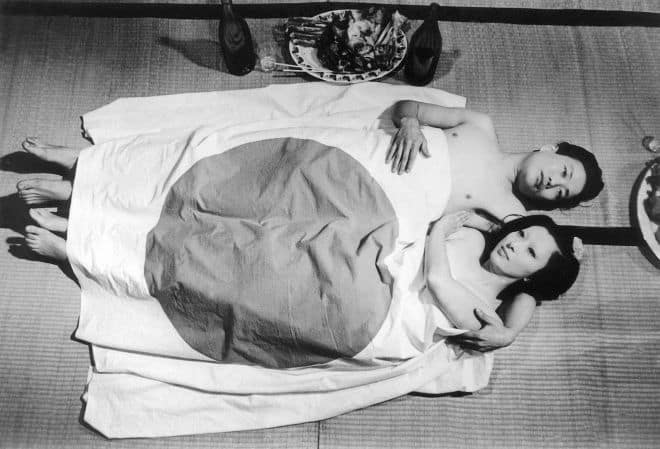 Back at the prison, R’s possibly non-existent elder sister suddenly appears (Akiko Koyama), whom not everyone can see. It is she who give  explicit voice to the film’s exploratory scrutiny of Japanese-Korean relations. The comedy is largely drained from these scenes, in essence to make room for the seriousness of the political implications. Food and drink with riotous revelry follows, during which time some of the men briefly allude to their own misdeeds and capabilities. And later, R has a lengthy digression on the difference between fantasy and reality, the distinction being an apparent basis for the defense of the real criminal upon whom Death by Hanging was partially inspired.

With cinematographer Yasuhiro Yoshioka, who had worked with Ôshima the year previous on Japanese Summer: Double Suicide (and would only do another six feature-length films after this), the visuals of Death by Hanging are flat and gray. As a vast majority of the film takes place in the area surrounding the hanging chamber, there is a strong sense of confinement, with necessarily tight compositions that accentuate the tense pressure cooker interiors as the authorities lash out at one another as well as R, making for at times uncomfortable viewing, something certainly not foreign to Ôshima’s cinema. 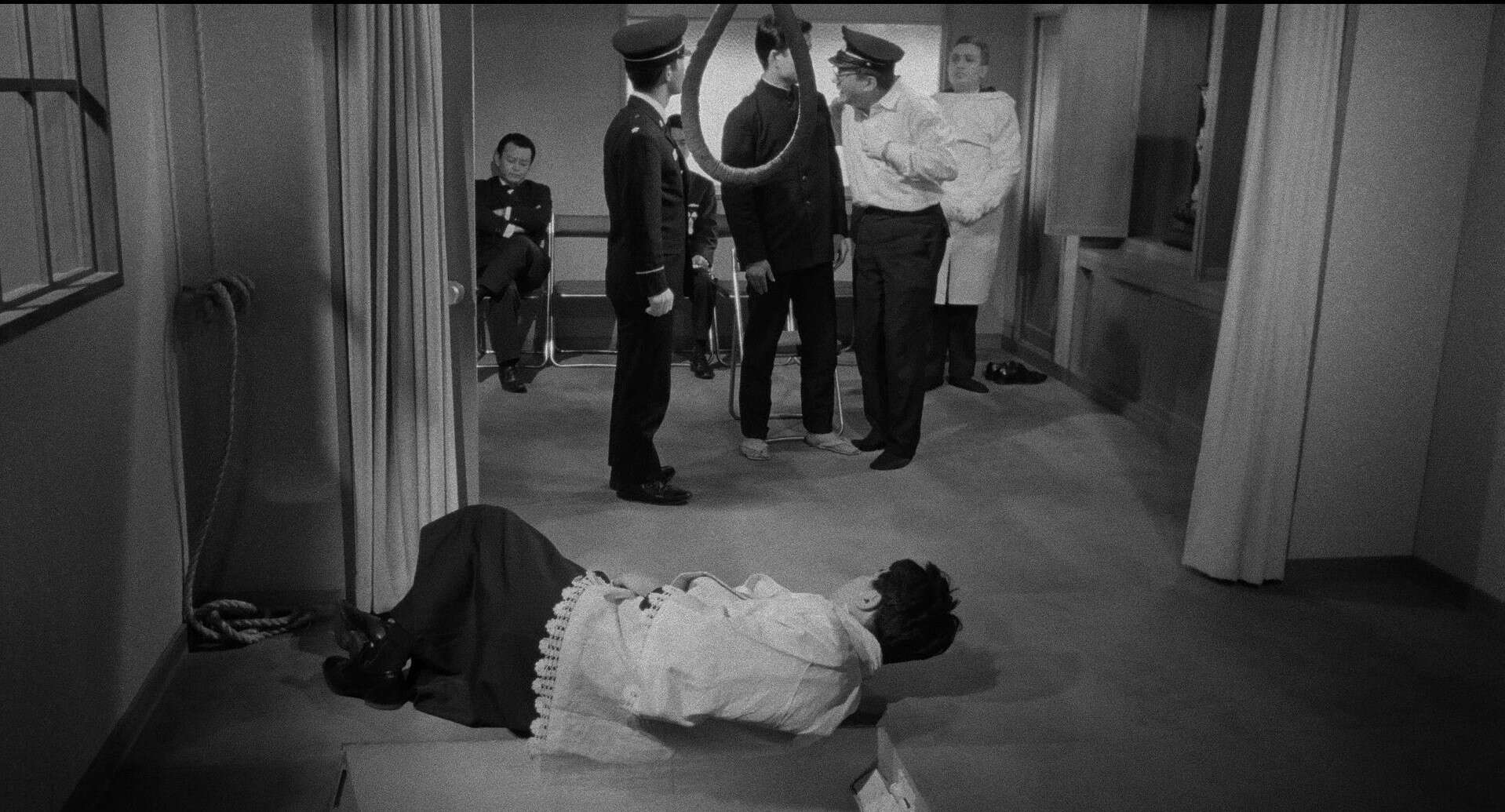 In an interview on the newly released Criterion Collection Blu-ray of Death by Hanging, critic Tony Rayns sets the scene for the film as but one superb entry in Ôshima filmography, a body of work exceptional in film-to-film reinvention and audacity. A “man of the left,” Ôshima certainly imbues the picture with a liberal message, part of which was inspired by the director’s visit to war-torn Korea, where he developed an interest in the plight of the Korean people and took photos of their condition (some of which appear toward the end of the film). The direct audience address via the narrator and printed titles give the film a firmly didactic sense of directorial commentary, one that does raise its fair share of controversial points for debate, as when one guard states they are not killing R, but rather that the nation simply can’t allow him to live, an earnestly spoken though undeniably problematic position. Exemplary of its time, an era abounding with biting and provocative cinematic creations, this is an inventive farce that does nothing to conceal its politically minded ideas and attitudes. With its division into seven chapters, Rayns’ considers the film an “anthology of points of view,” in which the inept authority figures emerge with the most condemnatory scorn.

Death by Hanging is a phenomenally experimental work, a brilliantly conceived way to explore issues of capital punishment and the prejudices that create sociocultural barriers. In making its argument, the film becomes a keen, creative critique on the burdens and tragedies of migration, poverty, and unemployment. And it is simultaneously engaging, humorous, and formally fascinating—a lot to get out of one movie. In his essay, “Death by Hanging: Hanging by a Thread,” Howard Hampton positions the film as “a cinema-of-the-absurd milestone and ferocious entertainment on a par with The Exterminating Angel, Dr. Strangelove, Shock Corridor, and Weekend.” I would say it’s also like a surreal, Buñuelian 12 Angry Men, only here the verdict has already been handed out.