And so the rebooted ­The X-Files ends as it began: in vague, confusing mumbo jumbo that bogs itself down, missing the point of what the series is good at. The tenth season of The X-Files has been structured in exactly the opposite way that relay races and album track lists are often put together, sandwiching its stronger entries between its two weakest—by far. “My Struggle II” suffers from pretty much everything that is wrong with its first part, so it’s tempting to retread criticisms for the sake of emphasizing how misguided the attempts at conspiracy-building in the two-parter are. But the finale goes even further in tearing down the walls trying to hold itself together and leaves bad tastes where other episodes from this season had managed to create good will. This season of the show has certainly not been a total loss, and there’s plenty to be thankful for, but the best reaction anyone could have to “My Struggle” and “My Struggle II” is to forget them entirely and forever.

I’m fairly lenient when it comes to suspension of disbelief, so some of the aspects of this episode that aren’t all that troublesome in the grand scheme of things are the explanations of how the Spartan virus works and the process of extracting Scully’s DNA to help create a cure. There are some technical terms thrown in there during Scully and Einstein’s quick thinking that require a “Sure, okay” from the audience, because there’s no use dwelling on them. Really, the idea of the Spartan virus—the idea—is one of the better things about the episode. Some of the previous conspiracies in The X-Files have been much more specific and sinister, but tying humankind’s general ambivalence towards taking care of the world in which it lives to government intervention within supposed medical preventative care to help ensure the destruction of people’s immune systems while singling out others as the chosen ones to rebuild the world is…well, it’s at least interesting. The series never shies away from bigger-picture material, and even though the global warming rant that the Smoking Man goes on as he’s explaining what’s happening is far more didactic than it needs to be, there’s legitimate relevance to the chaos of the hour for the audience to contemplate once it’s over. Only, it’s handled way too poorly for thoughtful analysis to take the place of disappointment. 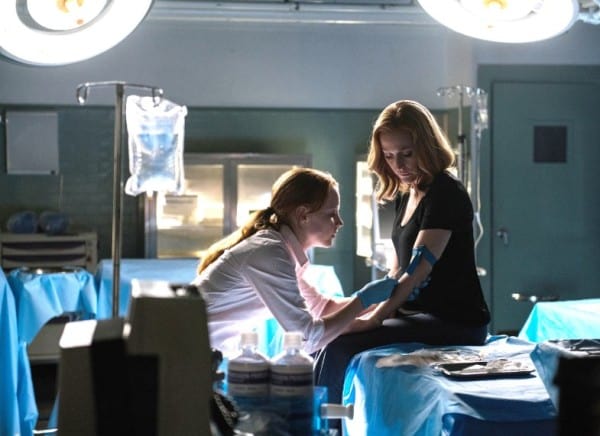 “My Struggle II” is, like its predecessor, too loud and too full. There’s too much to cover in the space of one episode, letting plot explanation displace character development and character moments, which are especially significant and noticeable omissions, given that Mulder and Scully make for 95% of what we care about at this point. Indeed, the two main characters hardly interact, the episode focusing more on Scully in parallel ways to how “My Struggle” focuses more on Mulder. Amid all the theorizing about what this alien DNA means, multiple supporting characters return, clogging up time as plot devices. The most egregiously misused is the return of Annabeth Gish as Monica Reyes, who delivers information to Scully out of nowhere in a convenient package before disappearing into the ether of the episode. Reyes didn’t have enough time as one of the lead characters of The X-Files in its twilight years for the fans to care too much about her, but even so, this guest spot doesn’t do any kind of justice to the character. Nor does the Smoking Man, who gets to cackle a few lines about how elaborate this plan is while letting Mulder just walk out. Every guest appearance, including Einstein and Miller, just lands weirdly and uncomfortably, mostly because they’re thrown in haphazardly. That reaction might come down to how short this season is—with 22 episodes, there would be more time to develop Einstein and Miller and ease in Reyes and the Smoking Man—but that can hardly be used as a justifiable excuse for bad writing.

And then aliens come. The end. That’s the punctuation mark for the season. After Mulder gets into an overlong and unnecessary “Who sent you!?” fist fight, after Scully yells at a group of looters to stop what they’re doing and go to the hospital because help is on the way and after William is mentioned one more time as the key piece missing from all this, aliens hover over the freeway bridge and the season is over. Again: best to forget this episode even happened. The cliffhanger itself isn’t too problematic, because formulaic series rely on cliffhangers. But the cliffhanger that expects us to care about what’s going to happen after not getting us to care at all about what is happening is intensely, unforgivably problematic.

So, ignoring “My Struggle” and “My Struggle II,” the tenth season of The X-Files is perfectly fine. It’s not revelatory sci-fi, but it has charm and command over certain tones. And—the bottom line—it deserves continuance. That was the big hurdle of the whole endeavor: “Will this be good enough to warrant more episodes?” The answer is unequivocally “yes,” because Duchovny and Anderson are still completely endearing on-screen together. It’s clear the mythology of the series needs total retooling going forward, but an episode like “Mulder and Scully Meet the Were-Monster” is proof that this team can still put together entertaining television at a time when entertaining television is more readily available than it has ever been.