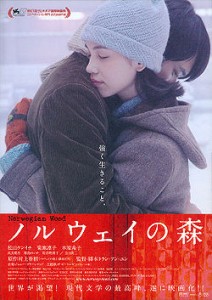 Norwegian Wood is the film adaptation of the highly praised and successful novel of the same name by Japanese writer Haruki Murakami. Faithful to the novel, the film explores the similar themes and human emotions of alienation, loneliness, and nostalgia. Murakami has always been a writer intent on combining western influence with Japanese culture, surrealism and fantasy with crippling reality, and above all sincerity with perversion. The film’s highly emotive story is drawn ever-present with the intricately crafted score by Radiohead musician Johnny Greenwood, which is augmented by songs from krautrock pioneers Can.

Greenwood (formally noted for such scores as There Will be Blood) approaches the score with the same sincerity that Murakami writes with; there seems to be a genuine respect and appreciation among both Greenwood and Murakami, particularly heard on ‘And I’ll Come and See’, and it is beyond speculation to say either were informed in the participation of the other, but it is a complementary and successful partnership nonetheless.  As the film follows Toru Watanabe through his nostalgic freshman university days, developing relationships with Naoko, a beautiful yet emotionally troubled women, and lively and outgoing Midori, the score evokes these themes of alienation and loneliness that Murakami plays with by the minimal instrumentation and obvious sorrow within most pieces that Greenwood creates. Murakami always seems to gamble with this idea of ‘spiritual emptiness’ within his generation and how, what he believes to be an apathetic and ‘weak-willed’ protest feeds into the work-dominated culture of Japan and its dehumanization of its people. Greenwood seems to tap into these personal and pervasive ideas that Murakami writes with, with alien-sounding formations of strings that do not cause a dissonance but a catatonic state of listening. In songs like ‘Naoko has Died’, ‘Bad Auditory Hallucinations’ and Can’s ‘Bring me Coffee or Tea,’ the aural presence of cynicism and self-defeat give the music a sinister edge—a daunting reality is taking place under the guise of comfortable nostalgia, yet there is still moments of beauty. These songs seem to teeter along the edge of absolute hopelessness and fright and sheer beauty and it might be interpreted as awkward only because it is so new and real. Regardless of the dark elements, the score is ultimately beautiful. The impact of each song, with the either entirely string elements or heavy string influences of Grenwood’s original pieces working in unique and breathtaking ways. Greenwood is able to do the same thing he accomplished on the There Will be Blood score, albeit with entirely different subject matter. Instead of relying on the suspense and fear of a psychologically twisted and startling plot, Greenwood conveys both those aforementioned moments of loneliness and despair, but also those of supreme fondness and love. Since the whole novel’s plot is spawned by Toru Watanabe’s nostalgic trip catalyzed by the Beatles’ ‘Norwegian Wood’, Can’s ‘Mary, Mary, So Contrary’ is a great fit. The song departs from the classical sounding score, sampling the 1960s psychedelic-rock elements of the Beatles. Divorced from the listing itself, the song is a drug-infused lullaby of sexually evocative guitars and singer Damo Suzuki’s bluesy vocals. Pure sex and sexual revelation and discovery can be heard on this track—it sweats from the voice, the climax of the song and the fuzzy, hazed-out guitars. This is one of the standouts on the score, not only because it is audibly different, but it is just a great representation and ode to that of the 1960s generation of rock standards; akin to its predecessors, the song embodies the sexualized revolutions taken personally by the willing in that generation.

Obviously noted for his There Will be Blood score, it is interesting that after the notoriety gained from that he continues to choose somewhat inaccessible films. Murakami is arguably the most famous Japanese novelist, and definitely has carved out a spot of fame and praise in North America, and yet his ideas of flawed human values and alienation aren’t necessarily those of commercially successful cinema. Coupled with that is the film is entirely produced for a Japanese audience, which is the right and only choice, but presents problems of attaining success in those English-speaking audiences because of our attention spans and celebrity culture. It is hard to sell a movie to an audience when the novelist is maybe not a household name, the actors are unknown, and the plot is ultimately a downer. To attach his name and his talent to such a project speaks volumes about not only his person, but of his intent in making scores. The film may not be the epitome of greatness painted here, especially once compared to the individual impacts received by reading the novel, but it is an important story to recreate for not only Japanese culture but on its own merits. Whatever Greenwood saw in this film, and for whatever reason, he has brought a dynamic and inventive score, once again, to the screen.  Greenwood is underestimated in his ability to achieve such musical virtuosity and diversity. Potentially out-shined by other facets of his coolness and fame, it is stunning to see a musician and artist create so many different emotions and thoughts through various mediums, and do it with such brilliance and seamless consistency.