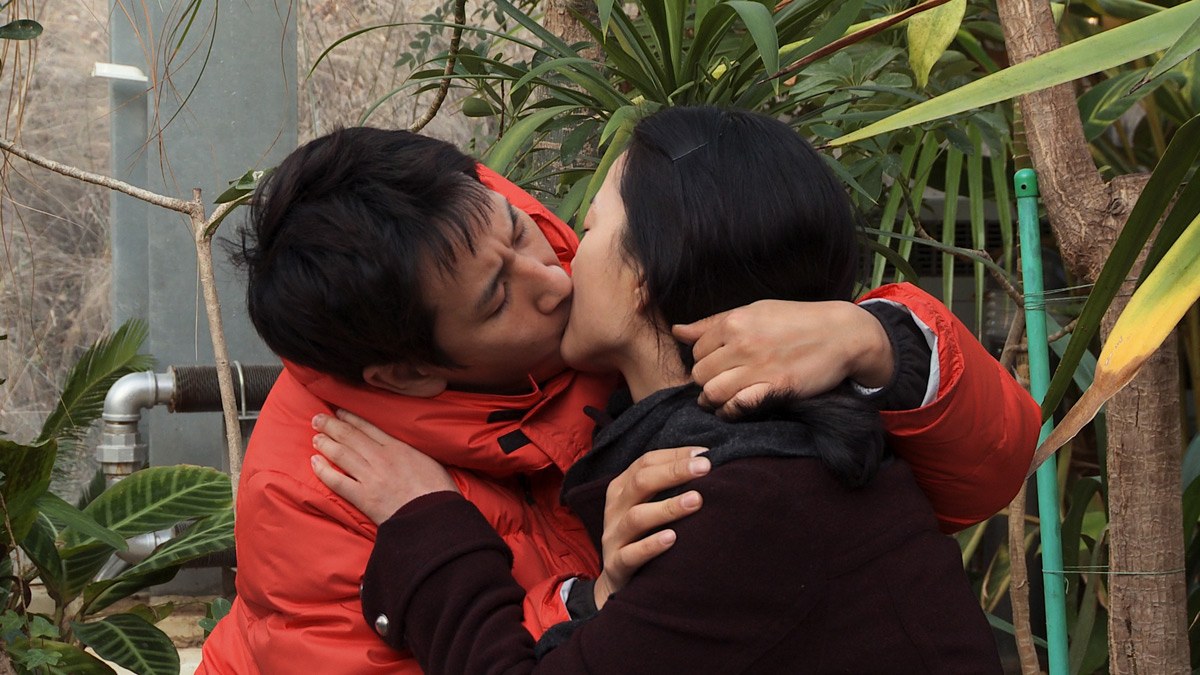 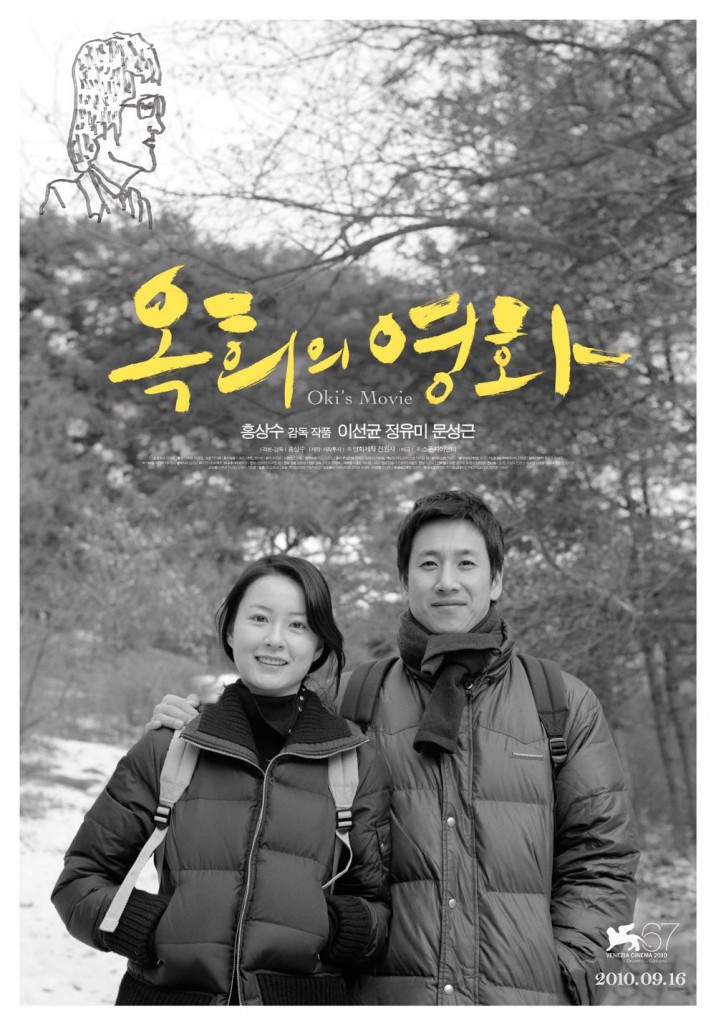 Canonical directors such as Stanley Kubrick and Howard Hawks are easy to laud and credit as masterful filmmakers. Even those new to film can understand their inclusion in the pantheon by looking at the breadth of thematic material they covered, often switching from one genre to another throughout the years without much hint of waning talent. The ability for a director’s signature to stand out no matter the working material was the spark of the American auteurism debate — Kubrick, Hawks, and a legion of other legendary figures posthumously adorn themselves with the title from their thematic eclecticism. If this is a talent to be valued and pronounced as exemplified filmmaking, then what of a figure who not only works within the same genre, but seems to be remaking the same film over and over?

Hong Sang-soo’s love of drunken filmmakers making themselves into idiots and ruining the lives of those they love is not much of a secret and neither are his ways of showing it. A retrospective take on his oeuvre piques cinephile interess not due to a staggering quality, but of a more interesting fashion of consistency. If Hong really is making the same film over and over again, this could be seen as practice, as a gradual coming-to-terms with what he ultimately wishes to express. Yet, it could possibly be that by presenting the same film each time, the differences are what should be noted, subtle variations giving a variety of expressions for Hong’s interests. Hong’s unique position in recent film history allows for a change in cinematic interpretation amongst writers: no longer does an auteurist interpretation interesting as it is simply given.Of course, much of this is a conventional wisdom perception of Hong, whose films do tend to vary more than usually noted and whose interests lie beyond soju and teaching film. Oki’s Movie gives a glimpse of Hong reflecting on himself more than ever, his perspective scattered amongst shorter films trying desperately to find a unified character, a mythical stand-in for the director. 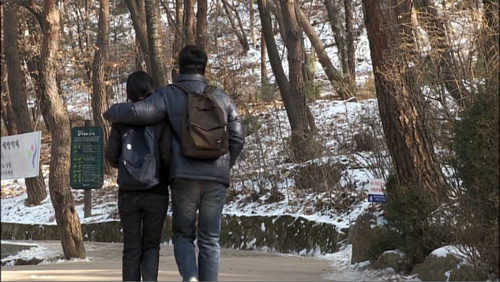 Jingu is marked with a distinct European sort of cool, clad with sport coat, scarf, and a cigarette, a standard artistic-type look, but smart and conservative. It’s the prototypical look of the Hongian protagonist, reservedly academic, yet affirming an active creativity he neurotically wishes others to observe. His wife scolds him for smoking too much and later for never turning down a drink, a romantic fault like those of Henry Miller or Bukowski that provides a social lubricant to reveal even faultier character traits. He attends a faculty dinner at a Chinese restaurant where he approaches a colleague, Song, about the ongoing rumors surrounding him and some economic decisions around campus. A soju-inspired argument fuels Jingu to march into his own film’s Q&A drunk. He is accosted about rumors, that he had a relationship with a  student several years ago and subsequently broke her heart, inspiring a hatred from her previous boyfriend. After this establishment, Oki’s Movie breaks into three other, possibly separate films. The first is from the perspective of a younger Jingu, a student at the same university, becoming obsessively in love with Oki, and rising to prominence as a filmmaker only to have a festival’s prize denied him at the last minute. The next depicts a lonely Song at an empty university, a harsh snowstorm blockading his students, engaging in what Sean Gilman rightly notes as Godardian conversation answered in platitudes by the dactylic-minded professor. The final is a short film by Oki, taking the film’s namesake, that recounts her separate romantic trips to Mount Atna, one with Jingu and the other with her past love revealed to be Song.

The films never explicitly give a timeframe by which we may make a coherent narrative out of them, nor do they purport to be within the same universe. There are narrative connections one could make — the revelation of Song being her past lover gives context to Song’s ambivalence to the drunken Jingu of the first film and may explain why he ultimately loses the competition, yet it would not account for Song’s calm exterior after the snowstorm. Oki tells Jingu that he’s the first she has ever loved, yet depending on whether the second and fourth film exist in the same universe, it may be a lie. “Four years ago” and “during the snowstorm” and the year lapsing on the final film are some of the only phrases to give temporal distinction to the events, allowing the various narratives to unfold without tangible context to their characters’ actions. Perhaps guesswork and fervent study may link the films together, but Hong is not a director to revel in puzzles or finding an answer like many have tried with Primer.  Instead, each part is given a perspective by which we may dive into Jingu and Oki. If Hong wishes to play a game, it is with our expectation of his protagonist to fall into the same trouble as his previous films, slowly garnering a love triangle to build dramatic tension. Yet the triangle is not tightly wound: the men retain their professional relationship while Oki persists more as a passive observer than instigator.

With Oki’s final film, Hong asks us to stop identifying Jingu autobiographically — he is now a curious interest of Oki, a character of her film who has many of the same ambitious qualities of Song, yet falters in the details. While Song wants to admire an altar, Jingu wants to continue moving up the mountain. Song is worried about Oki forming primitive feelings for Jingu while Jingu hardly worries at all; he is simply glad to have her. Oki admits that she loves Song and feels distant with Jingu: again, a cautionary statement, as she admitted her feelings for him within the second movie — perhaps Jingu’s hopeful perspective. “Things repeat themselves with differences I can’t understand,” Oki admits in voice-over at the closing of her film. This is Hong’s most direct admittance to his audience about his style and about the investigation of his characters. Each film’s blunt facts differ either to a subjective universe or a subversion of standard temporal cues, but maintain a sturdy investigation of love at its most abstract. It is also an admittance of his entire oeuvre, about his decision to craft the same story from different perspectives, driven by his confusion.

“Is love necessary?” Song shoots back, “You should vow never to love.” Perhaps it is a cynically wise line delivered to brazen youth; perhaps it is simply his denying of Oki’s affection for Jingu, depending on the time of the snowstorm. “Am I a good person?” “To somebody.” Song may refer to himself in a forgiving nature long after her relationship with Jingu, to himself as he grasps on before losing her, or perhaps this universe only exists for Song the wise instructor, emotionally distant from his pupils. “Do you think I have any talent in film?” “Keep making films and you’ll find out.” Hong Sang-soo continues to make a film or two every year, but we know the answer.