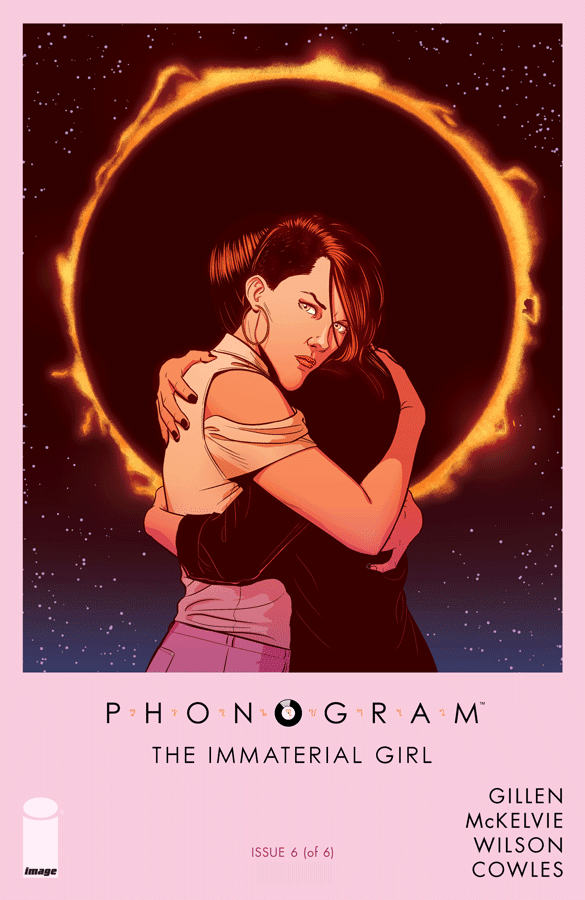 It’s fitting that the end of Phonogram is about the end of things and features one final story with David Bowie as the backbone to it.

Though, strangely enough, the main story is about death, but about the other major pop star death of the decade and of part of Emily Aster herself.

The issue picks up with the end of Emily’s fight from the end of the previous issue. After speaking with the image of Lady Gaga as the ceiling above them bleeds out from Claire’s suicide. “She’s terribly melodramatic,” Emily says with some resignation to fate. Gaga asks her if she really wants to break the deal in a panel that mashes together some of her most iconic video images with the signature Matthew Wilson color glow. It’s a striking panel that probably sums up the core of this story while emphasizing how Emily is not the first to make this deal, and she certainly won’t be the last.

With a realization of what David meant about it all coming down to her, Emily looks in a mirror and confronts the King Behind the Screen, who turns out to have been an avatar of Michael Jackson created by Emily all along. At least in her own head. Suddenly, the comment about mirrors not being your friend anymore in the first issue takes on another meaning when you realize Emily had to literally look inside herself to break the deal.

Which she does. In spectacularly gruesome fashion with a sketchy pipe wrench. The synchronicity in this scene between Jamie McKelvie’s art and Wilson’s colors is easily some of the best work they’ve ever done together, and that’s including most of WicDiv and Young Avengers. The sharp colors contrasted with the flat burgundy blood splatters is stark and beautiful. It’s violent in a way Phonogram has never really been before, but it has to be. No long and drawn out debate of fate here. Emily has always been someone who knows what she wants. 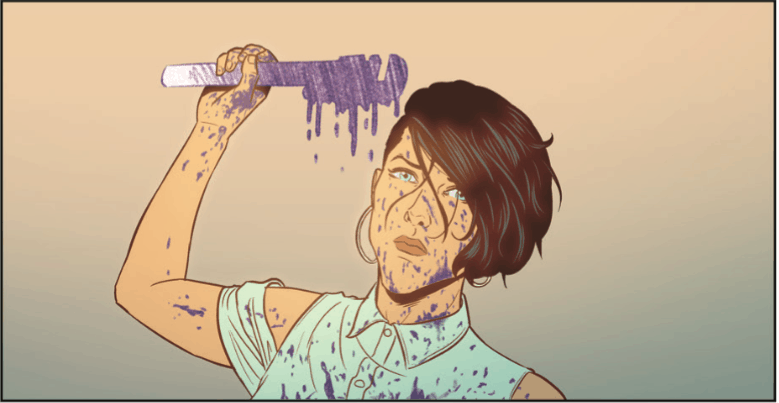 There are a lot of goodbyes in this issue, but the two pages of Emily saying her final goodbyes to Claire might be the most heartbreaking. Even though she wasn’t Claire for about a decade, Emily still carried her with her. Who she was and who she was trying to avoid being, but it’s very clear now that she never actually changed that much. Not with Claire on the other side of the mirror and not with a personality constructed by images. This scene, for all the harshness Claire and Emily showed towards each other, is gentle and mournful both in tone and colors. A part of herself dies forever here, and after everything she has gone through, Emily is finally sad for the fate of that part of herself. It deliberately calls back to Rue Britannia as well, with Claire dissolving into dust the way Britannia did all those years ago.

Emily breaks through back to our world. As she tries to stop the bleeding from the cuts, she gets the news of Michael Jackson’s death. After two pages about the fallout of Jackson’s death over the years both in our world and in the world of Phonogram, David Kohl asks Emily straight up if she killed Michael Jackson. He’s not crazy to ask. The first story in this series involved him killing a Goddess. Emily confirms that no, it was all in her own head, but she’s dealing with it in the way David dealt with the death of Britannia. The two sit and chat as it rains, realizing that they are growing up and growing older, and that Emily is going to have to try being someone new. She’s not exactly compensating for Claire anymore.

With one last melodramatic phrase, Emily walks out into the rain to the train station. As she walks in, she actually sees herself as the woman in the mirror for the first time. Across the way, Laura and Logos get ready to start their own coven that they talked about in #4. The next generation of Phonomancers continues on, and maybe they’ll be better than the previous one. They do hit it on the nose with their quoting of Florence Welch and her Machine though. This gift comes with a price. One that David paid, and one that Emily is paying now.

The B-side does talk about Bowie, but it’s really more about David Kohl as the Kieron Gillen stand in. Literally. To talk about it in depth would be giving the game away, but it’s a bittersweet punctuation on the series. Keep an eye out for Laura from WicDiv in the last page though. Whether to use her image in the background of one of the panels was Gillen or Tom Humberstone’s idea is unknown, but after the final page of the main story, it feels strangely poignant to see the story that grew out of Phonogram referenced.

The fact that Phonogram is ending is sad, but The Immaterial Girl was the story it needed to go out on. The final issue isn’t full of bombast or drama, but of goodbyes, uncertainty of the future, and new beginnings. It talks about how we imbue meanings in songs and images through the death of one pop star and inadvertently the death of another. Emily’s story was one of the trippiest stories of letting go and self discovery one could ever read, but damn, was it just right for her and this series.