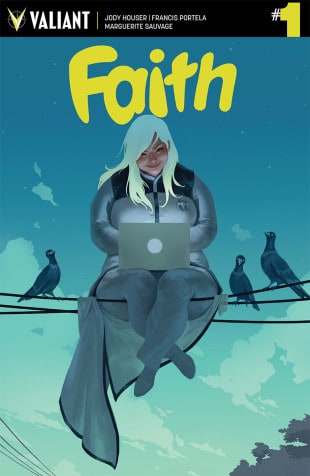 No matter what age you are or how long you’ve been reading comics, getting into a new comics universe is always terrifying. Lots of backstory you don’t know about. Established characters with origins already explained. It can be intimidating. However, a good team with a good story can manage to bypass those fears, guide you in and make you fall in love with that character and their universe.

The first issue of Valiant Comics’ mini-series Faith is a good example of that.

Spinning out of the series Harbinger, Faith tells the story of psiot Faith Herbert (codename Zephyr) after she moves to LA to become a better hero when she’s not working a job at Buzzfeed stand-in Zipline. Faith does have backstory that carries over from Harbinger, but Jody Houser does a good job of introducing that to the reader without bogging the story down and giving us a chance to know Faith better. Plus, the “hero breaks off from team and relocates” story is such a well-used but effective superhero trope that it doesn’t matter that you don’t know about The Renegades or Faith’s ex-boyfriend Torque, who looks a lot like what would happen if you made John Cena look even more like a bro.

Most of this issue is set up for further adventures along with introducing Faith to new readers, which is perfectly fine. Faith is so wonderfully cheerful and nerdy that it’s hard not to fall in love with her in just a few pages. Whether she’s dreaming of rescuing a handsome movie star named Chris, flying to avoid LA traffic, rescuing puppies from men with guns, or just chatting about The Fifth Element while eating Chinese food, Faith is probably one of the most relatable superheroes to come around in quite some time. Houser’s tone in the book of a more upbeat and nerdy superheroine will probably draw a lot of comparisons to books like Batgirl and The Unbeatable Squirrel Girl and that would not be an insult. 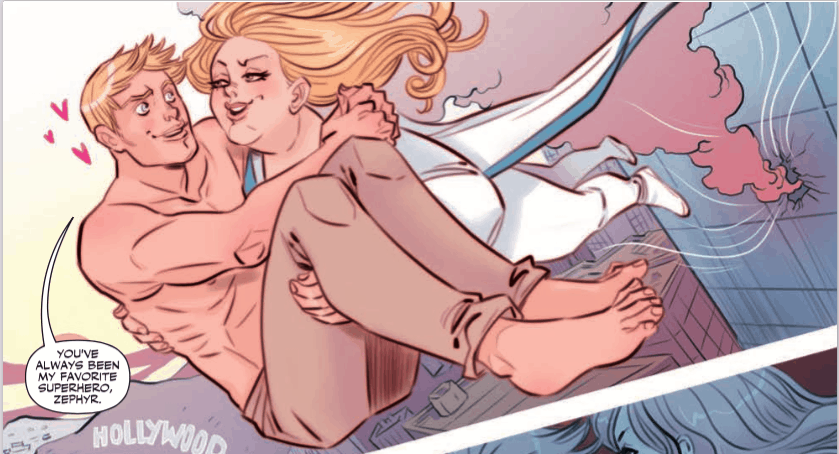 What has been bringing this book so much attention is the fact Faith is the first plus-sized superheroine in any company to lead her own book. The book does two great things with this. One, it does not use this fact as her only characteristic. She is shown eating, but it shown that these are regular meals and are just actions taking part of bigger things, like watching her ex’s reality show or talking to a friend via video chat. It’s there to give the book atmosphere, not to point out her weight. There are also never any fat jokes at her expense, even when she’s cornered by villains with guns, and she is very clearly shown as a person with romantic daydreams and desires without it being the butt of a joke.

Two, the art never tries to hide her size. She’s constantly drawn in cute clothes to wear when she’s not hero-ing it up and neither Portela nor Sauvage go for what is “flattering.” Faith has a belly and thick thighs and she never tries to hide them. Portela has a very typical superhero comic style that also manages to be very expressive. However, the choice to use Sauvage’s more delicate and pastel style in the fantasy scenes is a nice touch that is made even nicer by the fact Faith imagines herself as she is now, but even more awesome. That tells a lot of what you need to know about her even more than any bit of exposition.

Even without previous knowledge of Harbinger, the first issue of the Faith miniseries is an absolute delight. It could have been way too easy to take a character like Faith and turn her into a one-note joke, but Houser, Portela, and Sauvage flesh out her character so much in a wonderful introduction story. Faith’s size is not her only character aspect, but it is not hidden away like a piece of shame either. Plus, the book leaves off on such a cliffhanger that it would be hard not to pick up the next issue.