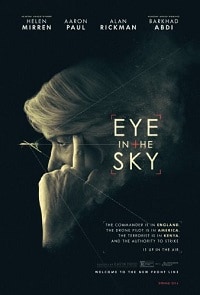 Eye in the Sky
Written by Guy Hibbert
Directed by Gavin Hood
UK, 2015

Drones beam hi-def images to a dozen people spread across the globe, each making life and death decisions while trying to balance legal, ethical, and geo-political concerns.

Director Gavin Hood’s new thriller, Eye in the Sky, is a vital commentary on the nature of point-and-click warfare. It’s also entertaining as hell. Though it eventually falters beneath the weight of its own gravitas, Eye in the Sky raises a lot of binary questions about our digital world.

Long gone are the days when you could look your enemy in the eye. Now, Colonel Powell (Helen Mirren) tracks terrorists in the streets of Kenya from the safety of her fortified bunker. Her commander, General Benson (Alan Rickman in his last on-screen performance), monitors the action from his British cabinet meeting. The images on their computers and flat-screen televisions come courtesy of a drone (The Reaper) monitored by American operations staff stationed in Las Vegas. There, Watts (Aaron Paul) and Gershon (Phoebe Fox) survey the landscape for possible targets of interest, ready to unleash The Reaper’s two on-board missiles (Hellfire). On the ground in Kenya, Jama (Barkhad Abdi) and a small group of soldiers prepare themselves for a possible “capture option,” while a computer team in Pearl Harbor, Hawaii perform facial recognition scans to correctly identify their quarry (either alive or dead). It all feels disconcertingly sanitary and anonymous.

That all changes when Watts identifies a new bogey; a little girl named Alia (Aisha Takow) who has come to sell her bread in the lot directly adjacent to a hive of potential suicide bombers. What follows is a prolonged struggle to decide if Hellfire should be unleashed on the bombers, possibly killing Alia. Sparing the girl means hundreds of innocent civilians will die; killing the girl means losing a public relations battle that will create new terrorists. This is knowledge at its most terrifyingly powerful.

Eye in the Sky ingeniously intertwines its numerous threads, with director Gavin Hood refusing to rush through the preliminary action. We get a thorough overview of the chain of command and, more importantly, the ‘rules of engagement.’ Remarkable technology shrinks the world down to the size of a miniature camera lens, with a drone ‘bug’ whizzing through the claustrophobic cubbyholes of a terrorist’s safe house. A dismembered body is precisely identified by a few extrapolated points on a bloody ear. The view from 10,000 feet makes it easy to forget these targets are more than just pixels on a video screen. Hood finds the perfect device in Alia to snap everyone back to reality. 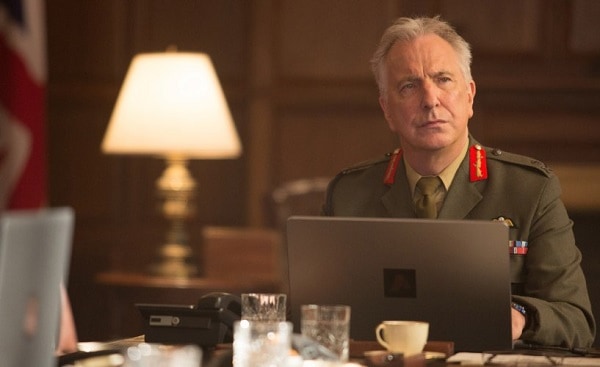 This isn’t a movie about character development and interpersonal drama; this is a movie of action. Or more precisely… inaction. With each new piece of intel, politicians and military pragmatists must debate a modified strategy. If you’re unaware of the term “referring up,” you’ll be well-versed by the end of Eye in the Sky (think of it as the real-time equivalent of ‘failing upward’). Each decision climbs a chain of command that is further and further removed from the actual humanity at risk. Not surprisingly, the kill orders become more cavalier with each degree of separation.

Mirren leads a stellar cast of character actors through their dramatic paces. The complete authenticity of the cast and Hood’s breakneck pacing make even the mundane, like staring at a computer screen or talking into a telephone, feel compelling. It’s also one of the more diverse casts you will probably see in a film this year. At a time when Hollywood refuses to hire minorities or actors of Middle Eastern descent, it’s nice to see this UK production entrusting the heavy lifting to some very unfamiliar faces. It’s a wise casting choice that, again, lends maximum authenticity to a complex issue. This could be your son or daughter or father making these terrifying decisions, after all. 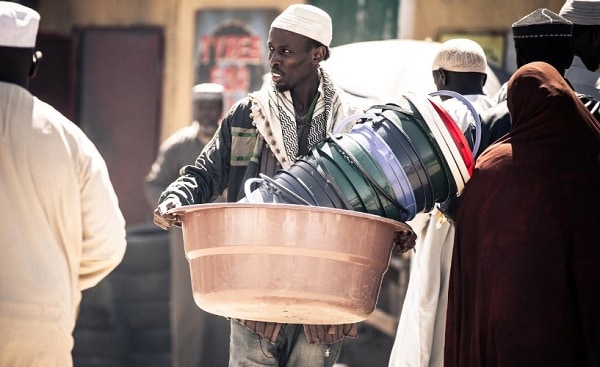 Sadly, the overall thematic and emotional impact of Eye in the Sky is diminished by its overwrought final act. Hood and screenwriter Guy Hibbert unleash the ‘Spielbergian sledgehammer’ to push an already-dire situation into the red zone. This extra melodrama makes the death of a drone’s battery pack or Alia’s persistent efforts to sell her last loaf of bread feel exhausting and unintentionally comical. All that’s missing is a car that won’t start and a suitcase with a ticking timer. The ending, too, is muddled. It feels as though Hood is searching for the emotional capper to a story that had already earned its emotional ending. Ultimately, the filmmakers are guilty of trying to stretch a taut 90-minute thriller into a ‘Cineplex friendly’ 105 minutes.

Still, Eye in the Sky wins big when it plays things smart. These are intelligent characters trying their best to reconcile Old World morality with New World technology. What percentage of risk makes it okay to endanger a little girl’s life? In the age of YouTube and camera phones, should public relations dictate military policy? It’s not hard to imagine leaders in government board rooms wrangling with these issues on a daily basis. Thanks to Eye in the Sky, we can be a fly on the wall in those board rooms. More than likely, that fly has a camera attached to it.