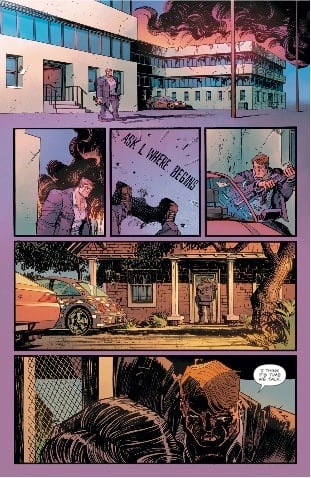 John Flood was last seen driving away with the mysterious killer in the back of a van, leaving the scene of the destruction from the last issue. John Flood #6 begins with Berry emerging from the police station; its concrete walls damaged and a fire ablaze, rising towards the sky. A note is written on the pavement below Berry’s feet that says: “Ask L where begins.” Could ‘L’ mean Lyta? Flood’s assistant from the first issue who hasn’t been seen since and remains an unfortunate mystery?! Berry knocks on the door of a house where his deeply shadowed face is greeted by Lyta! He suggests that they need to have a talk. Lyta agrees.

John Flood #6 is a revealing issue that utilizes both the telling script of Justin Jordan, the stunning artwork of Jorge Coelho (whom easily has his most intensely drawn issue) and the colours of Tamra Bonvillain who switches between wide open blue/green skies to red blotches of blood that stain clothes and splatter from the moments of violence.

The revelations begin on the wide-open country road, with only the vast sky and desert land around them; the sense of open space mirrors the tight, close frames in which most of the new information gained, surfaces. Flood tries to get the killer to open up by finally revealing his name: Randall Tate. The killer no longer feels anonymous as he reveals his identity. Though Flood and Randall are two different people, they are connected by the same thread of people who experimented on them and made them who they are. They both, in a way, are searching for a way to finally rest: death.

Heavy shadows with dark penciled lines from Coehlo are consistently spread upon Randall’s face, making the ‘truths’ that come out of his mouth as not necessarily being what they are being presented as. Coelho really knows how to utilize the space within the frames, playing a lot between the potentials of tension and revelation with tight, close ups and the distanced, wider frames to heighten emotion and the impact of the action. Carl Dreyer would be proud. 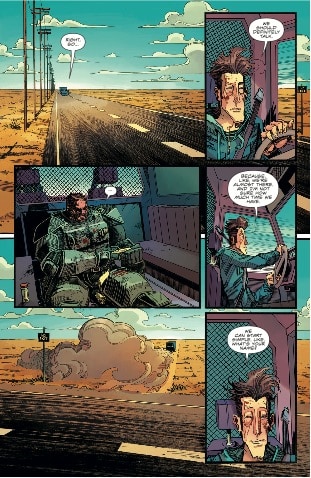 To stop Flood from whatever he has planned for himself and Randall, Lyta drives with Berry (in her multi-stickered purple Volkswagen Beetle, matching her uber-patched jacket) to stop the rising tension from last issue and prevent the unfortunate climax that clatters in both their minds. Lyta reveals to Berry something that Berry has appeared to show glimpses of in past issues but is unable to admit to: Flood is a good person. As much as Flood seems like a careless person, his detachment from others and sense of awkward humour is his way of approving of those that are around him.

The two parties will eventually meet at a very important place for Flood, setting up the emotional finale. This final issue shows the ways in which the past, a repressed period, feelings of regret, are to be dealt with in a myriad of ways. The violence that haunts Berry makes him view Randall as a manifestation of the spiders that crawl in his brain and he must commit the very act that strains him in order to be released. Flood realizes the only way he can be free from his eternal wakefulness and return to some sense of a reality is through death. Ultimately, it becomes the will of the characters and the choices they make for them to come to terms with their past and simultaneously believe, for Flood and for Berry, what their unity has allowed for them to realize about themselves.

John Flood is an excellent, thrilling, twisting, turning, emotional ride with entertaining, real, damaged characters. The journey over the course of six issues feels accomplished due in thanks to the well placed, humorous and dark script of Justin Jordan, the continuous, detailed, confident lines of Jorge Coelho, the tone and emotions provided by Tamra Bonvillain’s colours, and the well placed lettering of Ed Dukeshire. By the end, it feels like more can be said (a Lyta spin-off series?) and definitely warrants a continuation. For now, a standing round of applause is well deserved for this six issue John Flood.