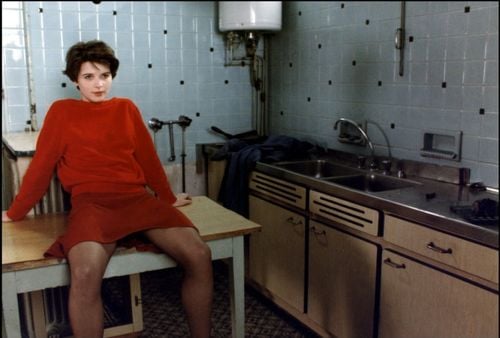 “What does it matter how many lovers you have if none of them gives you the universe?” — Jacques Lacan

“How’s it feel to take that off every night and find there’s nothing underneath?” — Quentin

Rendez-vous (1985) is the sixth film directed by André Téchiné, the first he wrote with Olivier Assayas, and the first time Téchiné cast Juliette Binoche. This director continued his trend of making films about failed romances, per Barocco and Hotel America, and expanded his style to create something similar to Andrzej Żuławski’s films. Téchiné’s film featured graphic sex-scenes with masochistic overtones and soft-core porn shows that are reminiscent to what Żuławski explored in That Most Important Thing: Love.  Rendez-vous looks at unrequited love from the perspective of damaged individuals that have no idea what they want and abuse others in the process of trying to discover that for themselves.

Binoche play Nina, a young woman from Toulouse who has moved to Paris to become a successful actress.Wadeck Stanczak plays Paulot, a young, meek real-estate clerk who meets Nina when she comes into his office one day asking about apartments for rent. She invites him to a play she is starring in and after the show, they go out together. They are joined by her boyfriend Fred, an usher at the theatre, who starts a fight with her and they break up in front of Paulot. Fred’s frustration with Nina was fueled by his jealousy and her casual relationships with other men. He was in love with her while Nina was using him for his apartment. Paulot misreads this as an opportunity for him to slip in with Nina instead of foreshadowing for what it is like to be with her.

Fred kicks Nina out of his flat and she needs a place to live much sooner than she planned. Paulot suggests Nina stay with him while she finds a place to live. When Paulot brings her home his erratic roommate Quentin (Lambert Wilson), the latter man refuses to let her stay. Paulot and Nina walk around all night to find a cheap hotel for her. She talks him about her past relationships with men. Nina has slept with every man she has met and is tired of being used for sex and she asks Paulot to leave her alone.

Nina rests and wakes up to the sound of pouring rain. She notices her door is open and a man is standing outside watching her. She slams the door shut and the man forces himself in. It’s Quentin and he speaks morbidly to her saying he could kill her and no one would know. She takes off her shoe and Quentin savagely kisses her until she beats him in the forehead with her heel. Quentin invites her to watch his performance at an adult club where he performs as Romeo is a XXX version of Romeo & Juliet. She is  turned off by his show but is attracted to Quentin, experiencing uncanny feelings toward him while holding off Paulot’s polite advances. When Paulot discovers that they are sleeping together, he becomes angry with her, losing his polite demeanor while continuing to pursue her.

Quentin gets hit by a car and is killed. It is unclear whether he jumped in front of the car on purpose or if it was an accident. A strange man named Scrutzler (Jean-Louis Trintignant) attends Quentin’s funeral and inquires about Quentin at Paulot’s work. Paulot remembers Quentin talking about Scrutzler saying he how was was afraid of him.

Scrutzler meets Nina and asks her to audition for his production of Romeo & Juliet. She quits her job as an actor in the other play. She auditions and gets the part even though the producers do not think she is good. Scrutzler will not direct the play without Nina in the role.

Nina learns from Scrutzler that he cast Quentin in the role of Romeo years ago. Quentin fell in love with Scrutzler’s daughter and they made a suicide pact together, which ended with the daughter successfully killing herself while Quentin survived. Since then, he has refused to act in Scrutzler’s production afterwards. Quentin’s entry into the film is strange because what we see is the end of his own story which began with Scrutzler’s daughter. Quentin’s end overlaps with Nina and Paulot’s relationship that Paulot desperately tries to turn into a romance but ultimately fails.

Rendez-vous is about very bad timing. Paulot falls in love with Nina but she rejects him. Nina meets Quentin but he is unstable and on a death-wish which gets fulfilled. Paulot then falls out of love with Nina only for her to fall in love with him. Nina and Paulot have sex but it is not loving. Their sex is angry and desperate. Nina needs affection and release and Paulot does it more to get her out of his system rather than as an expression of his love.

In Rendenz-vous, relationships begin while others dissolve and Téchiné uses repetition to connect these ill-fated pairs of lovers together. Paulot falls in love with Nina while watching her perform; Nina falls in love with Quentin while he performs in the XXX Romeo & Juliet; before the events in the film, Quentin and Scrutzler’s daughter fall in love with each other while performing in Scrutzler’s production of Romeo & Juliet. Characters fall in love when they see their love-object act out a fantasy in public. Paulot falls in love with an imaginary version of Nina, ignoring the signs of how she will treat him when he sees Fred break up with her.
Quentin and Scrutzler’s daughter exemplify this idea in more violent terms by creating their own suicide pact, emulating the deaths of Romeo and Juliet.

When Quentin speaks with Nina in her changing room after a performance, he speaks the themes of the film clearly in his dialogue to her: “How’s it feel to take that off every night and find there’s nothing underneath? Nothing. That’s what attracts me to you. You get me? If I’m hot for a woman I don’t need artifice. Kills the hard-on in fact…You have to look at things the way they are.”

Quentin, completely overtaken by his death-drive, speaks frankly to Nina, abrasively propositioning her and threatening suicide if she rejects him. Nina tells him to “cut out the act,” which connects to the ideas about infatuation with an image rather than reality. Quentin, having already experienced a trauma, has given up on illusions and communicates with his desire through violence, connecting love with death, blood, and aggression.

After his death, Quentin’s presence remains to haunt the rest of the film. Nina hallucinates a few times where Quentin appears and torments her. Scrutzler seemingly hires Nina because of her relationship with Quentin. He replaces his dead daughter with Nina in the play but does not replace Quentin. For Paulot, with Quentin dead, his jealousy finds a new target and he begins to hate Scrutzler because of his paternal relationship with Nina. Later, Paulot confronts Scrutzler and accuses him of sleeping with Nina. Téchiné’s depiction of love is ultimately pessimistic because every relationship in the film is depicted with strong feelings of jealousy, selfishness, dishonesty, infidelity, and masochism. When Nina and Paulot finally have sex, after Nina forces herself on him, it is angry and resentful, with Paulot spitting in her face between kisses. This time, when Nina gives Paulot an invitation to see her perform, he rips up the ticket, coming full circle from their initial rendezvous at the theater in the beginning.

The film ends with Nina’s first performance as Juliet in Scrutzler’s production. After months of preparation, Nina experiences extreme stage fright shortly before the performance. Unable to remember her lines or act as Juliet would, Nina begs Scrutzler to help her but he leaves for London, telling her she is now on her own. Her dream to be an actress is about to become a reality and she cannot face it.