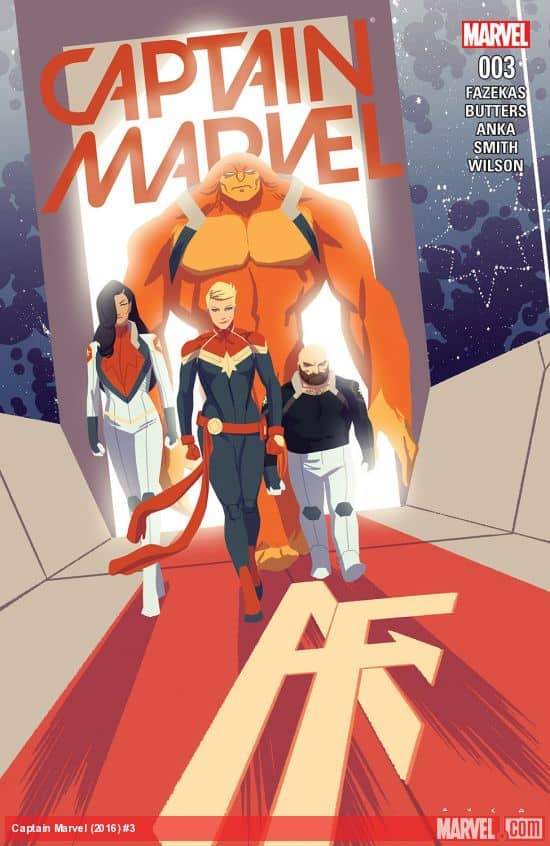 If you thought it was good before, All-New All-Different Captain Marvel is really hitting its stride this week, delivering well-paced, epic space adventure that cuts to the core of Carol Danvers’ past, present, and future.

After investigating the mysterious alien vessel that’s attached itself to her ship, Carol and Alpha Flight are dealing with some very dangerous repercussions. They’re juggling a diplomatic emergency and a host of technological anomalies. Wendy has been accused of treason, and there’s something seriously wrong with Captain Marvel.

As I’ve written before, I’m kinda fascinated by the way Carol’s entire life seems to be a cyclical loss and re-winning of power(s). It’s a pattern that–in the abstract–sounds like a neverending series of victimhood and self-destruction, indignities and recoveries. But in the right hands, Carol Danvers is an emblem for agency and self-actualization. 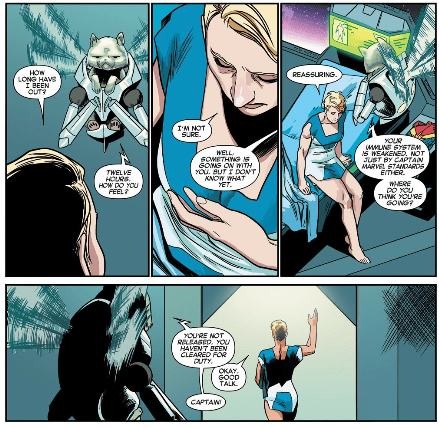 I sometimes wonder if I’m ever going to get tired of this kind of Captain Marvel story. But today is certainly not that day, because Michele Fazekas and Tara Butters are telling that story so darn well. Much like their whip-sharp reprogramming of specific sci-fi horror tropes last issue, Fazekas and Butters are (re)telling the essential Captain Marvel story, (re)shaping her essential themes with such clarity and exactness that it all feels entirely fresh and vital.

De-powering is a pretty tired superhero storyline, but it doesn’t really feel that way in Captain Marvel #3. Part of the reason it works here is that this story treats Carol’s powerhouse strength seriously and respectfully. 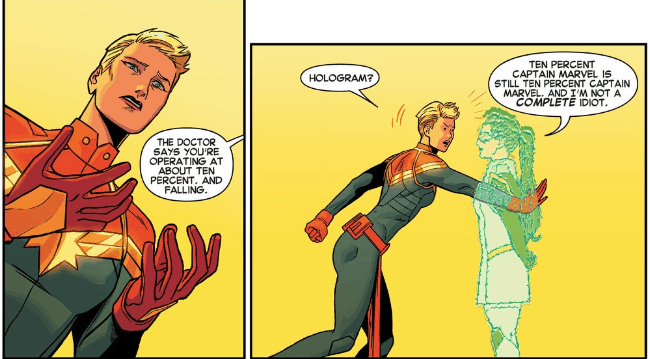 Throughout this issue, Captain Marvel is physically weak and weakening, incoherent, and with a (literal?) bullseye on her chest. But ironically, this isn’t a story about cutting Carol down to size, about watching her struggle when she’s weak. As always, her greatest obstacles and antagonists have an uncanny way of happening inside and outside her coincidentally. Conquering external foes requires the strength to battle inner demons, and personal struggles with trauma, illness, and disability get played out on an epic, cosmic scale. It doesn’t matter how well her super-strength and energy absorption are functioning–Carol’s resilience, determination, and general badassery are her real superpowers.

And this story isn’t just thematically smart–it’s impeccably well-constructed. If this comic was a movie, I’d call it “well-edited”–the transitions between panels, scenes, and pages are really clever. 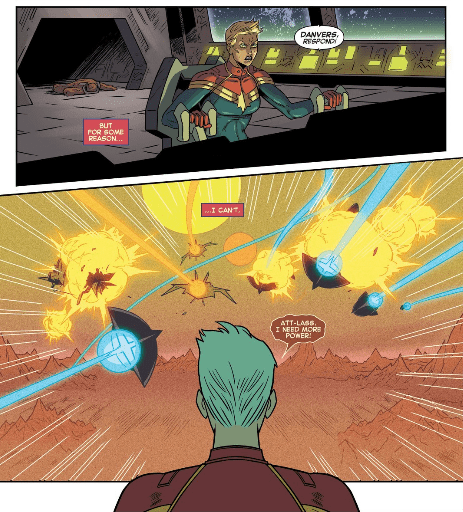 These shocking, disruptive cuts between Carol’s conscious mind and her hallucinations perfectly capture a certain kind of psychological terror, the uncanniness of blackouts and amnesia, the blank spaces between what you know and what you can piece together after the fact. Kris Anka deserves the lion’s share of praise for making these intense transitions so captivating. When you read this issue, check out the awesome page layouts: Carol’s nightmares are framed in diagonal panels full of slashing, jutting angles that contrast with the strictly right-angled, perpendicular geometry of the story’s main timeline.

The issue’s very first panel is an extreme closeup on Carol’s eye, and the rest of the book keeps up that highly stylized intensity: series of small, tight closeups on faces alternate with big, swooping overhead shots at weird, jarring angles, emphasizing the disorienting interplay between Carol’s interior battles and outer struggles, the constant whiplash between past and future that defines the Captain Marvel legacy.
All told, this is a tight, compelling 20 pages that elegantly juggles big explosions, witty dialogue, psychological thrills, and sci-fi fantasy.

See also  'Plutona' #2 looks at the difficulty of facing death