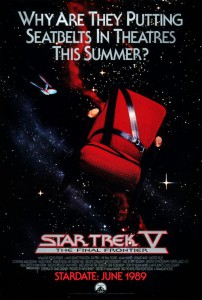 With JJ Abrams’ Star Trek Into Darkness making its way to theatres this May, Trek is already on a lot of fans’ minds, particularly the identity of Benedict Cumberbatch’s villain. Is he secretly playing Khan? Or maybe space Sherlock? How dare he play Khan! But it’s not as if the franchise’s spotty record demands such unwavering defence. In fact, the putrid smudge of Star Trek V: The Final Frontier alone makes a strong case for a rebooted franchise, in spite of both itself and its prune-faced hi-jinx.

Across the sandy dunes of Nimbus III, a Vulcan named Sybock (Laurence Luckenbill) ransoms three ambassadors in the hopes of capturing a ship from an inevitable Federation rescue, which he plans to use on his journey to the lost planet of Sha Ka Ree, roughly translated as “obvious afterlife metaphor.” Sybock is a rarity among a race well known for repressing its emotions in favor of logic. He chortles with the jollity of a drunk uncle, encouraging his growing cadre of followers to “explore” their pain through a bizarre psychotherapeutic hugging system. It’s all very technical.

Enter the Enterprise crew… by campfire, as Kirk (William Shatner), Spock (Leonard Nimoy), and Bones (DeForest Kelly) chisel away their Yosemite Park shore leave — and much of the film — via Three Stooges bits. Spock roasts a “marsh-melon” and Bones messes up a round of “Row Row Row Your Boat.” Ten minutes in and the preceding Voyage Home already seems far more successful at fish-out-of-water humour — and yes, that’s the one with the singing whales. The years have not been kind to the Enterprise crew, but despite his wrinkles and sagging paunch, Kirk is deemed the only Federation captain capable of rescuing three ambassadors from the clutches of one hypnotic, pointy-eared bastard. Never mind Scotty’s objections that the NCC-1701-A is nowhere near ready for travel. And never mind that Scotty himself (James Doohan) might keel over any minute from a triple bypass. 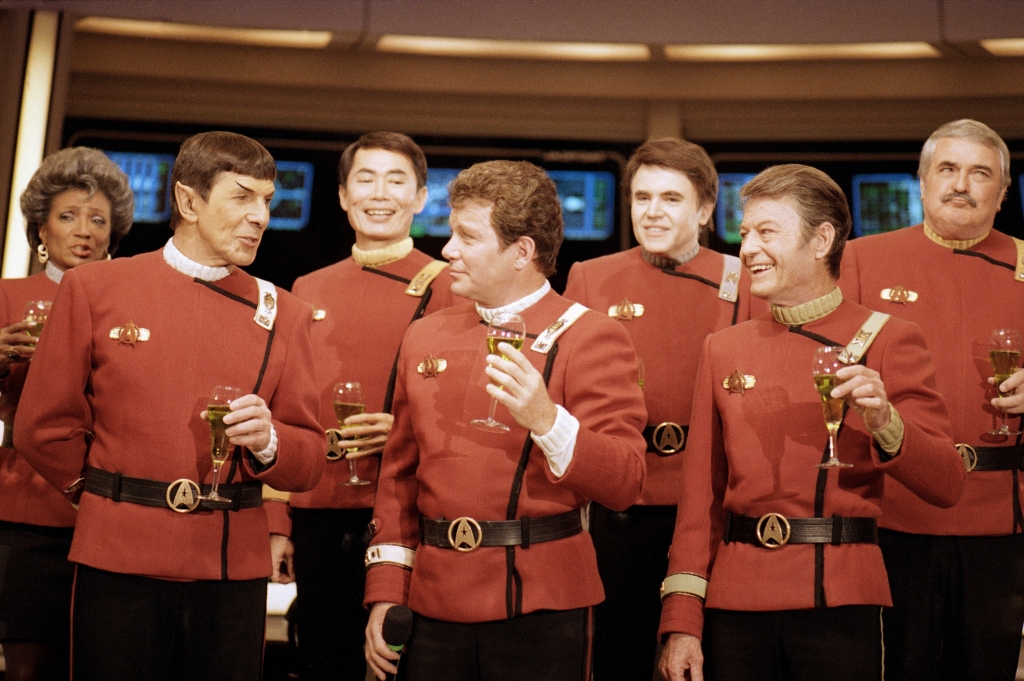 In a disturbing but strikingly apt metaphor for the film’s delusions about youth, the Enterprise crew gains entry into Sybock’s barricaded Mos Eisley cantina with the help of a naked, fifty-something Lt. Uhura (Nichelle Nichols) and a Yoko Ono cabaret number. Characters with sagging libidos suddenly enjoy spontaneous flirting, while pranks and bad jokes fly faster than the phaser blasts. Harve Bennett and screenwriter Dave Loughery’s story makes little sense on paper, and even less when the players show up, as if the Enterprise Crew arrived at a swingers party ten years too late.

1989’s “Worst Picture” winner and “Worst of the Decade” nominee, The Final Frontier begs an infinite array of questions: Did Spock simply forget about Sybock, his lost half-brother? What does all this emotional enlightenment have to do with an anticlimactic floating Oz head? Why are scenes shot like a segment from “Picture Picture?” Most importantly, what was director William Shatner thinking? The inclusion of a headstrong Klingon feels like a cheap dramatic afterthought, and when he’s not stumbling over the retreaded philosophy of earlier instalments, Shatner pushes “you’re only as old as you feel” cliches to the brink while wiping character motivations clean. Gene Roddenberry himself rejected the The Final Frontier’s premise — which at one point sees Kirk’s faithful crew members betray him under Sybock’s hippie hypnosis. Forget those rumours about Sha Ka Ree. The Final Frontier deserves a permanent stay in the Neutral Zone. 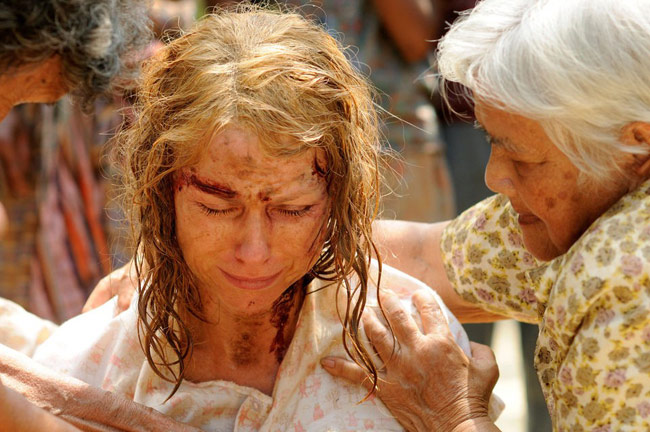 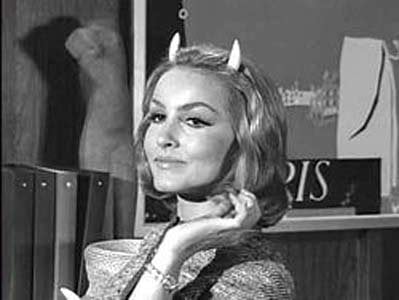