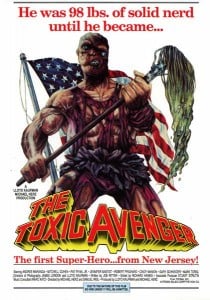 Writer and director Steve Pink (Hot Tub Time Machine, High Fidelity) has signed on to direct the upcoming remake of The Toxic Avenger and will pen the script along with Daniel C. Mitchell. Akiva Goldsman of Weed Road Pictures, Richard Saperstein, and Charlie Corwin of Original Media are producing.

The producers announced in April that they had secured the rights to the franchise, which includes the 1984 cult classic, four sequels, an animated TV series, and comic books. Corwin’s company, Original Media, (a partnership with Dutch reality television giant Endemol,) is financing development. The remake is envisioned as an environmentally conscious action-comedy.

Pink commented, “I’m thrilled to be working on this project. The Toxic Avenger is exactly what the country – wait, that’s not big enough – what the world needs right now.”

Kerry Foster of Weed Road Pictures will executive produce along with the creators of the original “Toxie,” Lloyd Kaufman and Michael Herz of Troma Films. Shara Kay will co-produce.

Goldsman and Saperstein last worked together on Sony’s 2008 blockbuster “Hancock,” which Goldsman produced and on which Saperstein served as an executive producer. The film has grossed more than $600 million worldwide.

Weed Road’s many successes include I Am Legend, Mr. and Mrs. Smith, and Constantine. Saperstein, the former president of Dimension Films, most recently produced another Troma remake: the psychological thriller, Mother’s Day, slated for release in 2011. Corwin produced the acclaimed independent films The Squid and the Whale, Half Nelson and A Guide to Recognizing Your Saints. Mitchell recently set up the action-comedy Zap Gun! with producer Marc Platt.