Supergirl follows up the momentum of last week’s eventful episode “Fallen” with a transitional episode that discloses some interesting backstory on key characters and introduces new plot development that rejiggers their position within the world that they inhabit. The recent defamation of Supergirl in the eyes of National City, due to the damage she incurred during her exposure to Red Kryptonite, has reset the show with a goal to recuperate her heroic status. It is a worthy mission that may take time to restore, but with only three more episodes left it’s uncertain that the show will give the arc its proper due, unless they allow it to flow into the following season.

For Kara, the desire to be heroic and help others has always been in her nature as is established in her flashback story. This has been Kara’s dilemma since the pilot episode where she wants to fit in, but is told or made to believe that she needs to be average in order to be human. But she is not average, she has abilities that she could put to great use and be more effective with rather than just being an assistant to Cat Grant. In a flashback scene, we see Kara rescue a woman and child from a car crash, which unfortunately leads to Alex getting injured by debris. After learning that Alex will be okay, she is told by her adoptive father Jeremiah (Dean Cain) “I know you were only trying to help, but the world already has a Superman, all you need to be is Kara Danvers”, which is to say: be average, be normal and try to fit in without being true to who she really is, which is someone who is as the show puts it “special”.

What’s most interesting about this talk is that it is then followed by Kara years later interviewing for the Cat Grant assistant position, wherein Cat goes into a diatribe about Snake People and how they believe it’s a given that “everyone is special” and puts a fine point on it by saying that you need to “earn the right to have an opinion.” What’s most revealing about this speech is that Kara wins Cat over by stating that she’s not special, something that Kara doesn’t really believe but is saying just to stay under the radar as she has been told to do by everyone. But the most curious part of the scene is when Kara looks at one of Cat’s TV screens with news reports about a forest fire. Kara stares longingly as to say I could’ve done something to help there, but I have to hide or people might get hurt. The desire to help people burns in Kara and Cat could see it in her in the scene as well. These scenes are telling of Kara’s journey as Supergirl, that she may have these abilities and power and desire to help people but she still has to earn that heroic status by proving herself and maintaining that reputation, because it can just as easily be lost again making her need to start all over again, which is what she has to do now as she is currently shunned and feared by the people of National City, a task towards redemption she decidedly takes on by episodes end. 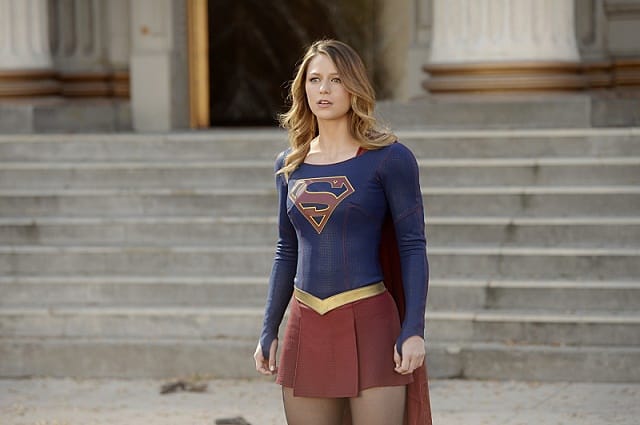 Kara’s journey is paralleled to Alex’s in the sense that Alex is not special, at least not in the same way as Kara is. It is great to see aspects of Alex in the flashbacks, such as when we see her as a young teen in Kara’s flashback, being a normal Earth girl preoccupied with typical school social anxieties trying to spend time with a boy she likes and dealing with a weird younger sister that she just hopes doesn’t mortify her by association, to when she gets pelted with a piece of debris as a result of her sister being special. It’s something that doesn’t get as explored in the episode but is hinted at, through showing Alex years later as she gets plastered at a club then sent off to jail for the night, being destructive for what may be issues of being overshadowed by a sister, who although she loves dearly, makes her feel not special by comparison. The scene where Hank Henshaw visits her in jail is a significant moment in their relationship too because that’s when Alex was becoming destructive and appeared to have given up on her ability to be special, and it was Hank who offered her the opportunity to join the DEO which allowed her to find her place, to find her way to be special.

Being found at your darkest moment and attaining a new mission could be the theme of this episode because Kara after her heroic status has fallen decides that she needs to regain it, Alex spirals down to her lowest point in a jail cell after a bender is then recruited by Hank to protect the planet from Alien threats as her new mission, and then there is Hank Henshaw aka J’onn J’onzz, a refugee Martian who lost his entire race and was struggling to find purpose in a world that would hunt his kind. He encounters Jeremiah Danvers who shows him that humans aren’t all predators and not only that, Jeremiah went out on a limb to save J’onn’s life by killing the real Hank Henshaw. This interchange gave J’onn his mission to protect Jeremiah’s daughters, as well as take on the role of Hank Henshaw to ward off alien threats. The flashbacks in “Manhunter”are all very well utilized and reflect on each of the characters individual journeys in a way that informs where they will go as new plot develops in the present timeline. 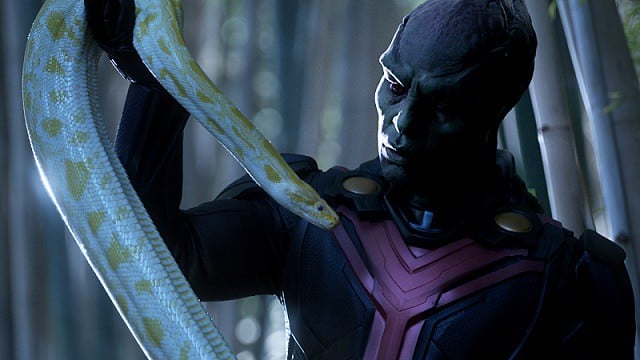 In the present timeline the plot involves the witch hunt of possible alien threats who have infiltrated the DEO, with Henshaw’s reveal of his Martian side being the catalyst of this investigation. The Task force assigned to inquire the DEO brings back a familiar face in Lucy Lane, placing her in a new role and a position of power that is a smart direction to take here rather than her simply being a third wheel foil to the James and Kara romance. Bringing Lucy Lane in an antagonist role in the episode is a fair position for her to start and having Kara reveal her identity makes it much more significant here than it would;ve before when Lucy was still working for Cat. It’s also a nice to position her in a place that makes more sense for her by making her the new head of the DEO, while Hank and Alex go fugitive on the lookout for Jeremiah Danvers. Hank learns that Jeremiah is still alive and being held captive in the mysterious facility known as Project Cadmus, a development that puts both Hank and Alex on what’s sure to be a fun adventure because there is much left to learn about Project Cadmus and Jeremiah’s status and it looks like it will be pretty interesting.

To close off all the plotlines in the episode and keeping in the theme of finding a purpose after hitting rock bottom, we have Siobhan Smythe who had tried to get revenge on Kara but failed at it only to be betrayed by Winn. Siobhan is the cause of her own woes as her goals are misguided and vindictive. Siobhan’s arc is one that looks to be one that will be the most fun to watch as she appears to be hitting her rock bottom pretty much by getting fired a second time by Cat which sends her trying to figure out what makes her special and what her mission should be. The answer will likely be better investigated in next week’s episode as it looks as though she was saved at the last second before hitting actual pavement by discovering she does have something special about her after all, and it seems like it’s something that’s worth screaming about.

Overall, “Manhunter” is a strong transitional episode that gives interesting character backstory along with promising new development that will be continue the streak of good and fun episodes, as we head closer towards the season finale.