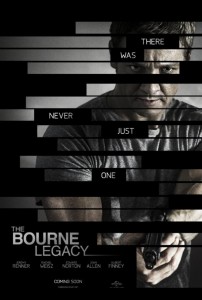 Well, two out of three ain’t bad. Jeremy Renner’s had a decent year, starring opposite Tom Cruise in Mission: Impossible – Ghost Protocol before fending off aliens as one of The Avengers. But The Bourne Legacy, where he replaces Matt Damon as a new super-spy running for his life on a quest for freedom, is his first definitive attempt to be a big movie star. As much as Renner feels right to headline an action movie, The Bourne Legacy, which is at least 20 minutes too long and has too little story to tell, isn’t the right fit for his talents.

Renner is Aaron Cross, an elite member of Operation Outcome, which is meant to be a less flawed version of Operation Treadstone, the program that created uber-spies like Jason Bourne. As Cross meets at an Alaskan rendezvous point with a fellow Outcome member, the rest of the world is finding out about Treadstone, as seen in spliced-in bits from The Bourne Ultimatum. In reaction to the potentially disastrous news, government agent Eric Byer (Edward Norton) is tasked with removing all assets associated with Treadstone, Outcome, and similar classified units. Cross manages to survive an initial attempt on his life, but needs medicine to maintain his Bourne-like abilities, so he seeks out comely scientist Marta Shearing (Rachel Weisz) to help fend off his attackers. Co-writer and director Tony Gilroy (who wrote this film with his brother Dan) tries to adequately capture the same cinema-verite tone and cold, clammy tension of the previous Bourne films, all of which he had a hand in writing. Though he knows the notes as director, he can’t quite play the music. In aping the storytelling and cinematographic style Paul Greengrass achieved in The Bourne Supremacy and The Bourne Ultimatum, Gilroy only succeeds at slowing down the story’s pace or making the action sequences (of which there are surprisingly few) incomprehensible. A climactic car chase should be intense and pulse-pounding; sadly, despite the work of Oscar-winning cinematographer Robert Elswit, the sequence is hacked to shreds.

Another major downfall for The Bourne Legacy is an overreliance on the events of the previous films. As a good portion of this movie takes place at the same time as The Bourne Ultimatum, it’s necessary for the audience to remember that film’s every twist and turn. Frankly, the more we see Damon’s Jason Bourne (in photographs), the more it feels like this movie both desperately wants him to appear and should avoid even mentioning his name. Renner’s more than capable of headlining a movie of his own, but it’s as if Gilroy (or the studio) wasn’t so sure about his ability to command the screen without the albatross of Matt Damon weighing down his every move. Yet Renner’s the most impressive performer here. Weisz, usually so charming and talented, comes off as shrill and obnoxious as Dr. Shearing. She’s meant to be the audience surrogate, shocked at Cross’s ability to lay waste to his fellow man. Audience members, though, are likely more up to speed on the franchise mythology, so having a character this unwilling to accept what’s right in front of her is a serious impediment to the pacing. Norton is a serviceable antagonist, taking the place of previous government heavies played by David Strathairn and Chris Cooper, but he never does more than look exhausted and frustrated, as his character is forced to play catch-up on where Cross is and what he’s up to.

The pacing is the biggest roadblock in The Bourne Legacy. Because so much of this film is covering the bases from The Bourne Ultimatum while introducing a new chapter to the saga, there’s a lot more conversation than there is action. This isn’t to say that a predominantly talky movie with short bouts of action can’t be a decent film. But Gilroy doesn’t have a solid enough handle on where and how to make the story move like a shot. A movie that’s 135 minutes long is fine; a movie that’s 135 minutes long and drags for long stretches is nowhere near fine. Though the setup for the story may seem like a lot (it isn’t, even though an hour goes by before we pass said setup), Cross has two goals: get medicine and stay alive. Those conflicts aren’t worthy of holding up such a long movie. Renner has been riding high since his superlative turn in the tense, sweaty war film The Hurt Locker. His last three projects, The Bourne Legacy included, prove without a doubt that he’s as able to be a leading man in no-holds-barred action movies as someone like Matt Damon, though Renner’s jittery energy is a little off for this role. He’s within his element when his character is beating the tar out of assassins, cops, and government agents looking to do him harm. And he has enough pathos and sardonic wit to be a magnetic screen presence. However, The Bourne Legacy and its problems are too weighty for one man to handle. Renner comes out of this unscathed, but the rest of the participants aren’t so lucky.