I will confess, Tom Clancy’s The Division probably wasn’t made for someone like me. I’m typically a solo gamer with the occasional cooperative excursion when my friends’ schedules actually match up for once, someone who is much more interested in exploring and going at my own pace through a story with a distinct beginning and end than someone who’s looking to farm loot and hone my skills to a competitive level. My last MMO must have been Guild Wars 2, an experience best described as a “summer romance” more than anything. And I don’t even remember what the last modern military shooter I played might have been. Spec Ops: The Line I suppose. That might not count.

So I was going in hot with minimal intel, as they say. Prior to diving into the beta all I had really heard about the game was that some people had found it disappointing so far, just based on the titles of articles I’d seen fluttering by in my browsing. It wasn’t even clear to me, and the beta’s lack of plot details certainly didn’t help, what I was supposed to be fighting in there? I was just waiting for the zombies or mutants or whatever to show up at any minute as I strolled through the abandoned streets of digital New York. But no, this is apparently the one post-apocalyptic game out there without some sort of zombie or equivalent enemy, instead populated entirely by gangs of masked looters and thugs named Alex.

The first thing I noticed was just how insanely detailed the recreation of a devastated New York was. I’ve never been to New York myself, but more than I’ve seen in a long time, this backdrop had an outstanding sense of realism and size. It didn’t feel like a video game city, but like an actual place. That it was so empty and quiet actually felt unsettling instead of just business as usual for a video game. My first thirty or so was spent just wandering around and taking in the sights of the well-crafted streets and back alleys. I found a bit of loot, shot a few bad guys, and generally felt well-immersed. It was scoring points with me so far even if I hadn’t done much.

Eventually I burned through the limited stretch of content offered in the beta, but I was having fun, even if it was simple. The shooting was smooth and functional, and the shiny new guns you find all over filled me with an urge to keep doing stuff. I tinkered and adjusted my loadout and skills and upgraded the base to the full extent you were allowed to in the beta. I sorted through my array of looted scarves and jackets to find the best look. It was pretty satisfying.

There was a black cloud hovering over my fun though. While the solo and co-op content was pretty fun to me, if a bit simple, there was a whole section of the map I hadn’t yet explored. Called “The Dark Zone” and presented as one of The Division’s defining features, it’s a more dangerous part of the map that has tougher enemies and better loot. The kicker is that not only do other players show up, but friendly fire is 100% on. On top of that, any loot found in this area has to be taken to a extraction zone and loaded onto a helicopter that takes time to arrive before it’s usable. In the meantime, you can be killed and looted of those unsecured items by other players. You also carry a visible canister on your back when you’re holding loot that can be stolen, to advertise your succulence to other players. 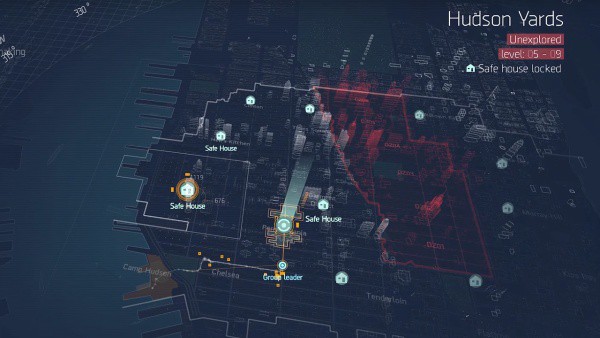 The red area of the map is where the bad times happen.

That was a lot to take in for someone like me. It’s not that I necessarily hate the existence of competitive shooters so much as I just don’t find them fun. I’ve dabbled in them here and there, and even if I’m doing well and winning, the high-alert, intensely-focused state I have to get into to find any success with them leaves me feeling drained and tense. Which is exactly the opposite effect I tend to self-medicate with games to achieve. I don’t play games because I want to feel tired out and anxious, I play them to stop feeling that way. So it was with great skepticism that I stepped into the dark zone for the first time, expecting myself to be repeatedly gunned down by a whole clan of players banded together with the best loot.

No such thing happened in the hour or two I spent there. I have no doubt that it does happen, as people are people and this is an online video game, but most of my exchanges in the dark zone went as follows:

And then we’d move on, not trusting each other enough to stick together. I wandered solo, shot some dudes, and extracted some loot alongside other friendly/indifferent players without incident. Everyone seemed pretty reasonable, and I made sure to get onto voice chat to ensure everyone that I wasn’t a jerk either. So that wasn’t so bad.

Eventually I decided that since the beta was ending the next day, I might as well get into some trouble. Heading towards the red skulls on the radar that marks “rogue”, or player-killing players, I joined a firefight between non-rogue players working together to take them out It became an impromptu team deathmatch rather than the promised experience. No one was taking each other’s loot, it was just players shooting each other for fun, which doesn’t strike me as the intended experience.

Now I’m just left to wonder, what was the point of the dark zone? It’s obviously not designed for straight up PVP, and unlike the ongoing team deathmatch that is games like DayZ, the rogue system seems to actively discourage players from attacking others unless they’re sure it’s worth it. Since the best loot is in there, I can’t just ignore it, and neither can the rest of the playerbase. So we all have to put up with the potential for over-leveled groups blocking us from this part of the game, while maintaining a standoffish distrust of everyone around us we don’t know.

I guess the tension involved makes for an appealing experience for some players, but for me it just strikes me as a troll-enabler. In order to combat the gangs of rogues that form, you need to have a solid group of people you trust around you, which just strikes me as deliberately alienating anyone whose friends have full-time jobs and aren’t available every night. That so much emphasis is put on this dark zone as the end-all of loot gathering, any moment spent in the usual co-op content just feels like wasted potential. In just a short time in the dark zone I’d already upgraded nearly all the gear I had equipped to a better version. So it’s clear the game really, really wants you to go there and won’t be a complete experience without it. 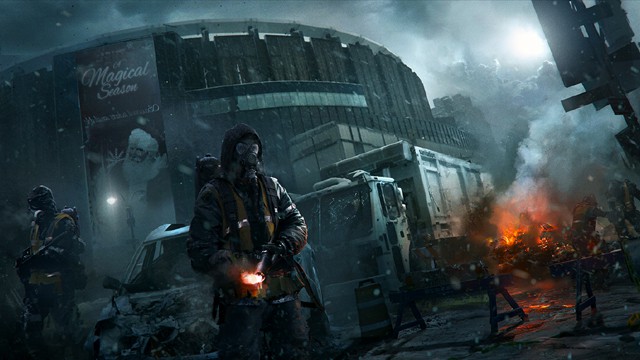 Just mentioning the zone to my usual co-op partners pretty much killed their interest in the game as a whole, and learning about it nearly did for me too. While in the beta it was fairly inoffensive, it feels like it’s a feature no one particularly wants to deal with but has to if they want to progress in the game. The players who just want loot have to deal with the over-geared rogues, and even the rogues who want a rewarding player-killing experience get stiff penalties for their behaviour without really gaining anything. Everyone wins by working together, since the loot is still instanced and awarded to everyone who participates in a battle versus AI opponents, so anyone killing other players is doing it for the sheer thrill of it at the expense of their own supplies and everyone else’s time

For a cooperative player like me, this is a little drop of poison in an otherwise intriguing game. I don’t mind PVP elements being present in a game, but when they’re emphasized as the “core” experience and impossible to avoid without missing a large chunk of the content, then I’m alienated, and so is everyone I play with.

Maybe things will change between now and the full release, but as it stands right now, The Division just seems to be forcing an awkwardly-implemented optional PVP mode down the throats of all its players and refuses to let them enjoy the game without it. No one really wins here. The people looking to test themselves against other players are given a lack of structure and treated as akin to trolls by the game itself, and people like me who just want to shoot and loot in peace are left just feeling annoyed. If the sales don’t turn out well, then this clumsy section might be partly to blame for turning away what might otherwise have been a receptive part of their audience.