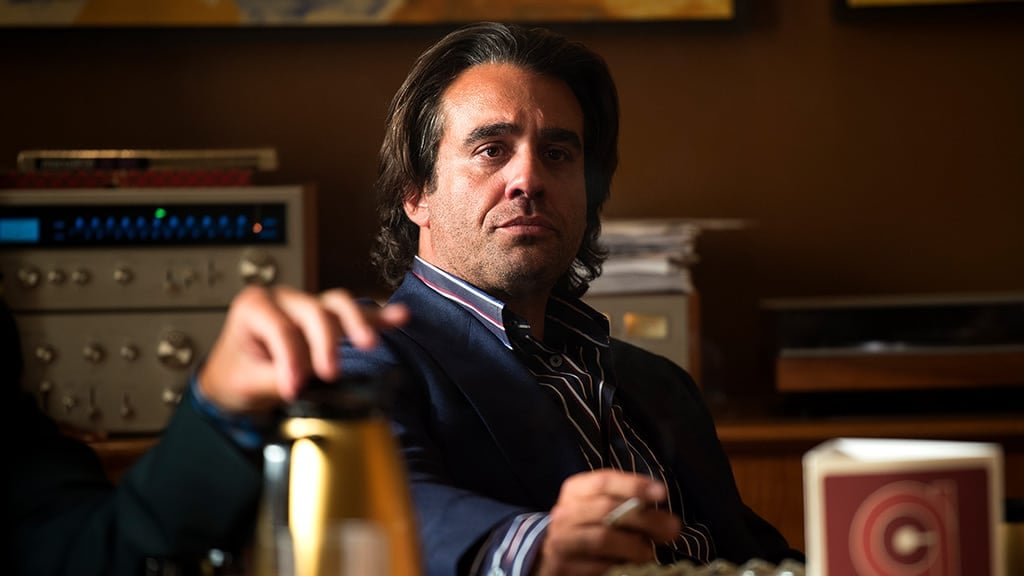 If it succeeds at anything, Vinyl knows how to do a good coke scene. Bobby Cannavale has perfected the wild-eyed look of someone who’s been doing cocaine for three days straight, and the music and sound design fit the scenes perfectly. The problem is that I just don’t care. Vinyl has already done enough coked out Richie scenes to prove that he has a drug problem, an addictive personality, and a marriage that is being torn apart by his hubris and impulsivity. Obviously if Richie is going to succeed in destroying his life, he’ll need to keep taking those toots, but the show becomes less and less interesting the more it wallows in his drug use. A scene of Richie on a bender, even when well done, is still only so compelling. It’s like a fine beet salad; no matter how good it is, it’s hard to make someone care about a beet salad.

After Richie blew up at Devon for her perceived flirtation with Hannibal, Devon left and hasn’t been back in three days. While she’s been gone, Richie has been drinking and snorting day and night with his German friend Ernst, from back when his relationship with Devon was brand new. Ernst is a trickster character who pushes Richie towards further debauchery. Except that he’s just a symptom of Richie’s cocaine psychosis. No one else references him in any of Richie’s scenes, and later in the episode Ernst mentions the murder of Buck Rogers, something he wouldn’t know anything about. Eventually the car accident that killed Ernst is shown in a flashback, with Richie in the driver’s seat. Despite how uninteresting Richie’s cocaine binges are, it’s heartbreaking when he ends up in a car outside the Cyclone at Coney Island while Buddy Holly plays.

While Richie is abusing substances, Devon has gone to stay with Ingrid. She tries to be more adventurous and does some nude modeling. Ingrid correctly perceives that Devon wants to be an artist, but her past isn’t clear enough; was she once an artist, or was she merely a muse to artists? Or did she just hang out with them? Hopefully Devon will have more time to explore that part of her creative personality.

Ray Romano’s Zach also gets in some good scenes in this episode. He feels threatened by how easily Andrea has integrated herself into the label and how willing Richie is to take her suggestions (even when Zach was shot down for the exact same ideas months before). When Richie stumbles into his daughter’s Bat Mitzvah and tries to make a stoned apology, Zach unleashes the rage he’s been building up about losing out on a huge payday when Richie cancelled the label sale. Romano is electrifying when he’s allowed to stand out like this. It’s unfortunate that he’s more of a supporting player than a co-lead.

The episode ends with an in memoriam card for David Bowie, made more touching by the death of Richie’s friend that we’ve just seen. But the David Bowie performance in the episode was a bit off-putting. Noah Bean is a surprisingly good look-alike, but when he actually speaks the voice doesn’t sound anything like Bowie’s (and the accent, barely there in the first place, goes in and out). I wouldn’t normally expect an actor to have complete fidelity to a real life character; it’s about portraying their essence, not mere caricature. But after being inundated with so much of Bowie’s music and his public appearances following his unexpected death, his voice has been ingrained in my mind. Bowie’s speaking voice could segue effortlessly into his croon, so it’s jarring when Vinyl’s Bowie opens his mouth and sounds nothing like the real man. Maybe this wouldn’t have been an issue if his death wasn’t so recent. Then again, maybe it would have, considering how iconic Bowie is. It’s the first misfire the show has had with portraying real life rockers.

The episode’s title, “Cyclone,” effectively summarizes the episode. Richie’s bender leaves a wake of destruction behind it. But cyclones also go around in circles. Once Richie reunites with Devon at their home, he has a chance to reconcile. Instead, he erupts at her during a botched apology. Richie’s cyclone rotates right back to where it was three days before, now with his marriage in shambles. The challenge for Vinyl is to see if it can finally find some forward momentum for Richie. He can’t keep going around in circles.