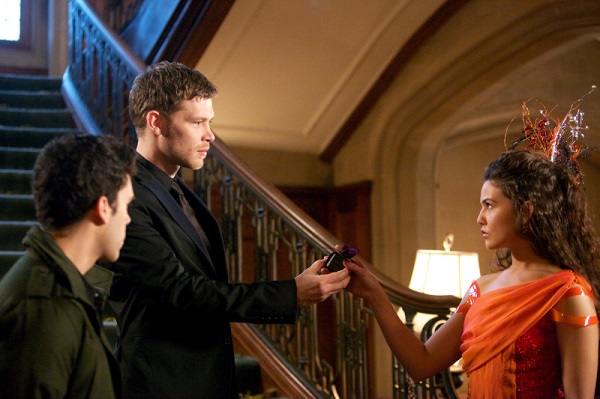 The Originals, Season 1, Episode 18, “The Big Uneasy”
Written by Marguerite MacIntyre and Michael Russo
Directed by Leslie Libman
Airs Tuesdays at 8pm EST on The CW

On this week’s The Originals, the witches host a ceremony, Klaus attempts to re-win the favor of several French Quarter women, Hayley learns the truth about the werewolves’ pact with Klaus, and Elijah struggles to keep the peace.

The Originals is very much a show about the politics of power, and “The Big Uneasy” is a great example of just how entertaining supernatural-fueled power struggles can be, especially when set in a place as lovely and lively as New Orleans. Of course, it helps that those vying for power in the French Quarter are all intelligent, persuasive people–it’s incredibly hard not to root for everyone fighting for the hypothetical throne.

At the very core of the struggle is the burgeoning divide between original siblings Elijah and Klaus. Elijah is calm and calculating where Klaus is rash and reckless–if only the pair would work together, they’d be an unstoppable team. Unfortunately, Klaus isn’t quite smart or mature enough to see this–he craves power and control but isn’t willing to share. One great storyline is developing from this growing sibling rift–Elijah’s slow evolution into a man just as ruthless as Klaus.

Elijah’s always been a bit of a moral center for Klaus and his siblings, stretching back to his time on sister show The Vampire Diaries. He rarely stoops to senseless brutality, and he represses his desires (most recently his attraction to Hayley) for the good of those around him. However, such self control can make for a dull character, no matter how charming he may be; it’s nice to see The Originals darkening one of their most moral characters.

On the other end of the morality spectrum, Marcel and Klaus both prefer violent displays of their power or discontent. Though Klaus dials down the violence in the episode as an attempt to keep the peace (and, as a result, is rejected by three women during the course of the episode–most humorously by Davina, who rejects him in front of a sizable audience), Marcel prefers a slaughter and words written in blood. The climactic party crashing is both disturbing and uncomfortable, especially when the lights flash off and the blood starts flying. And, of course, bloody words on the wall is a vampire special (even Buffy did it), but that doesn’t make seeing it any less eerie or horrifying. Unlike Klaus, Marcel is a much more threatening opponent to the stability of the Quarter.

Lastly, Hayley’s baby is unsurprisingly in danger (again) and the witches are angry. The season finale is growing ever closer, and it looks like a huge supernatural war will be breaking out–yay! This should be exciting.

Who are you rooting for?


Prev Article Next Article
Tags:review, The Big Uneasy, The Originals