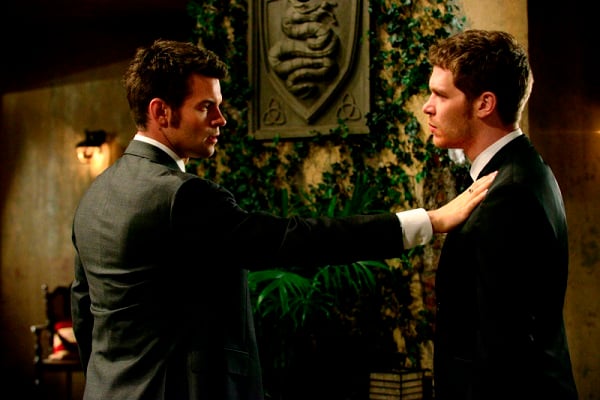 The Originals, Season 1, Episode 20, “A Closer Walk with Thee”
Written by Carina Adly MacKenzie and Julie Plec
Directed by Sylvain White
Airs Tuesdays at 8pm EST on The CW

On this week’s The Originals, Father Kieran’s wake is held, Marcel returns to the Quarter for a day, Klaus and Elijah suffer nightmares of their father, and Hayley struggles to protect her unborn child.

With a baby on the way, “A Closer Walk with Thee” fittingly examines fatherhood and the sometimes traumatizing effects fathers can have on their sons. Daddy issues have plagued Klaus since his stint on The Vampire Diaries, and, though his father may be dead, Mikael still haunts Klaus (thanks, in part, to the subtle crossover with The Vampire Diaries within the episode–the Other Side is crumbling, meaning the line between life and death is blurring once again). Klaus’s deep-rooted struggle to escape his father has always been one of the more fascinating aspects of his character, and The Originals does a nice job tying Klaus’s relationship with Mikael to his relationships with Marcel and his soon-to-be born child.

From the very beginning of this series, Klaus rejected Hayley and the baby because of his fear of fatherhood, so it’s nice to finally see him attempting to embrace it. The scene where he shows Hayley the baby’s nursery is incredibly compelling, especially since acts of pure kindness are very rare for Klaus. Joseph Morgan always does a nice job in these scenes by keeping Klaus hesitant and subtly charming–he doesn’t make a show of his kindness, but rather stumbles toward it. Also,  Hayley’s no fool, and she doesn’t trust Klaus, but it’d be nice to see a genuine relationship develop between the pair (at least for the baby’s sake).

Meanwhile, the flashbacks in the episode only served to showcase the non-relationship Marcel had with his slave-owning father; aside from providing a laugh over the ridiculous period costumes, they were relatively useless. Still, the dynamic between Klaus and Marcel is one of the show’s strongest elements, and it’s always nice learning more backstory about the pair. In Klaus’s eyes, Marcel is practically his son, or at least was, so the parallel between how his relationship with Marcel turned out and how his relationship with his unborn son may turn out is especially strong. Klaus clearly feels his son may become his enemy or vice versa, and it’s easy to see why when considering his relationships with Marcel and Mikael. Luckily, Klaus seems willing to change, and the show appears to be willing to let him try.

In a lesser but still important storyline within the episode, Monique tries to voodoo the baby in Hayley’s belly and fails. She’s as useless a character as her Aunt Sophie was, and this episode only reinforced her status as a witchy annoyance. (Though Monique does end up being the  catalyst for a rare heartfelt confession from Elijah, so at least her existence served some purpose.) Maybe the whole Deveraux family tree should be retired? Just a suggestion.

Oh, and fun fact: “A Closer Walk with Thee” is writer Carina Adly MacKenzie’s first official writer credit, and she did a really great job (she’s already been confirmed as a full-time staff writer on season 2). “A Closer Walk with Thee” takes a breather from the brewing NOLA war, but it doesn’t feel like a filler episode at all–it’s a nice edition to the season overall, and an excellent character study, especially with Klaus. It’ll be exciting to see how MacKenzie contributes to the series next season.