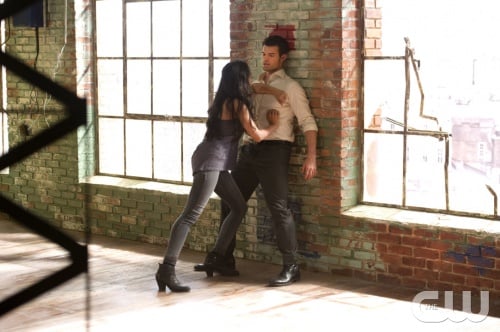 On this week’s The Originals, Hayley and new werewolf leader Aiden team with Marcel and Elijah, Cami plays shrink to Klaus, and Davina takes self-defense lessons from Mikael.

The Originals loves its dynamic cast of characters, and the show especially loves playing with new teams and one-on-one pair-ups for an extra layer of character development. While “Live and Let Die” does stick some old friends together–Cami and Klaus, Marcel and Elijah–the episode also introduces quite a few new, and very fun, partnerships, like Hayley and Marcel, Elijah and Gia, and Josh and Aiden. The end result is an extremely satisfying hour of character-driven television.

Another really intriguing aspect of this episode is how quickly Esther’s actions force the warring werewolves and vampires together. Wouldn’t it be more beneficial for her to keep them on opposite sides? Though she is very focused on bringing her family back together, so maybe she doesn’t care what side the wolves and vampires are on. Hopefully, the werewolf and vampire truce stands long enough to take down Esther–it’s always entertaining to see enemies joining forces to defeat a larger, mutual threat.

The only real downside to the myriad of teams forming is how likely it is that several of the new pairs will transition into romantic relationships. There’s nothing wrong with relationships on a drama–they keep the tension levels high and inform the characters–but, The Originals is so much better when it focuses on heavier themes of family and war; too much focus on romance will saturate the show with sap. Unlike sister show The Vampire Diaries, which revolves around romantic relationships, The Originals is a much darker and more complex show. All the show needs is to keep the balance between action and softer character moments, something it’s done really well thus far.

There are several action-packed scenes in “Live and Let Die,” and all of them are excellent in different ways. The scene with Elijah training Gia is lovely because it’s so beautifully-choreographed and because it gives the audience more insight into being a new vampire, something The Originals has never really touched upon before. (Plus, it allows Elijah to deliver lines like “As a devout feminist, I refuse to say you hit like a girl.”) On the opposite end of the spectrum lies Elijah and Oliver’s confrontation with a pack of werewolves and Klaus’s showdown with his father. The former is barely seen but is still incredibly (and unnecessarily) gory, while the latter is very intense, but probably only a teaser for what’s to come, as the episode’s end indicates.

“Live and Let Die” easily remedies last week’s complaints, namely the absence of bigger storylines for Cami, Davina, and Marcel, and continues to add new and exciting developments to this season’s story. While it’s fun watching new pairs and teams join forces, it’s also satisfying to see such dangerous enemies gaining strength and growing even more threatening; the two combined are a perfect formula for an inevitable confrontation.