With The Dark Knight Rises opening this week, it’s only appropriate to look back at the series’ first two entries as well as previous incarnations of the Batman. Compiling a top ten list of best scenes from a character that has spanned decades would appear a fruitless effort. With a wealth of rich images, performances, and set pieces, there are countless lists that could be made. This one tries best to objectively quantify ten great scenes from all seven theatrically released films, ordering them in terms of iconography and emotionality, but also according to the fundamentals of what makes a film scene work and why this indelible character is so enduring. SPOILERS herein. 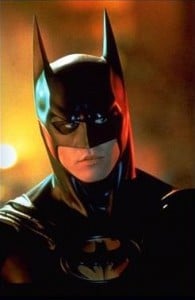 Joel Shumacher’s day-glo interpretation of the Dark Knight might not be the best place to start a list of great Batman scenes, but his Batman Forever, despite its narrative shortcomings and frenzied pacing, manages a few moments of genuine iconography. Particularly, when Batman pursues the maniacal Two-Face by hurling down a building and opening his wings to break his landing, we are treated to a stunning special effects shot that spins around his freefall. A few perfunctory pyrotechnics later and we get our second moment of awe: Batman emerging from a wall of flames in the glory of slow motion. The film–and this scene in particular–emphasizes the character as an unkillable force, a symbol that causes an exasperated Two-Face to bellow (before trying to blow him to kingdom come) “Why can’t you just die!” Yet it also stresses the vulnerability of a man fighting crime, as evidenced when the newly christened Robin has to pull our hero from the rubble. This is big, unapologetic filmmaking (made more so by Elliot Goldenthal’s appropriately booming soundtrack) that, for one set piece at least, works like gangbusters.

The birth of Batman

The early Bat films took to fetishizing Batman’s cape, cowl, and gear such that by Joel Shumacher’s take we were getting full on Bat-butt shots. Though Burton and Nolan’s Batmans each have their own cool moment when the Caped Crusader dons his suit in preparation for his battle with evil, no live action film can match the simple atmospherics of Batman: Mask of the Phantasm. In this version, Bruce largely puts on the mask in spurned response to being rejected by his great love, Andrea–his only option for a normal existence. Drawn in silhouette and colored in moody blacks and blues, when Bruce turns around to Alfred, the faithful butler can only gasp in horror. It’s an operatic piece of comic book animation come to life, the image of a man who becomes a beast.

“A kiss can be even deadlier…”

For all of Tim Burton’s carnival eccentricity and shameless literalizing of the Batman mythos, the one character aspect he got right in his two films is the tempestuous dynamic between Batman and Catwoman. In his second outing’s finest scene, the Bat and the Cat share their steamiest encounter at a masked ball where they are ironically the only two people not wearing costumes. As the two of them share a dance, their verbal pas de duex signifies the broad emotional spectrum of their connection from attraction to shock to respect. While Michelle Pfieffer devilishly smolders her way through their dance, Michael Keaton works the scene with his steely gaze, as Wayne is both mortified by Selena’s ruthlessness and uncontrollably aroused. With a trivial refrain about mistle-toe, each secret identity is exposed, as Danny Elfman’s strings replace the soundtrack, isolating the twisted two from the bourgeois crowd. Sadly, after the couple steps off the dance floor, the Penguin bursts through it in a giant rubber ducky. But until then, this is the sexiest, most intimate scene of any Batman film.

Descent into the Batcave

It’s a mostly wordless scene of mystery and intrigue that says everything through the blackened stare of the Batman. After being rescued from the Joker, Vicki Vale is given the world’s creepiest joyride in the Batmobile. Passing through a misty forest of dead trees, slipping through a tight tunnel of darkness, and finally coming to a stop on the edge of a bottomless underground pit, Vale is given the all access tour into the Caped Crusader’s hallowed sanctuary. Painted a million shades of black and adorned wall to wall with bats, Tim Burton’s attention to production design pays off with his least complicated set: the cold confines of the Batcave where secrets and suspicions meld into one tortured lair. It’s a perfect mixture of ominous and majestic, the classic character in a nutshell. 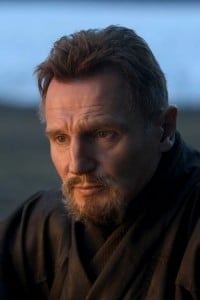 “…without hesitation, without pity.”

Despite an origin and history ripe for spine-tingling montages, Batman Begins is the first feature film to have one, a nifty duel on a frozen lake between Bruce Wayne and mentor Henri Ducard. But it’s the scene after that sets the tone for the rest of Batman’s journey and for Christopher Nolan’s franchise interpretation. Bruce, convalescing from his brutal training, warms by a fire with Ducard, who opens up about the reason he secluded himself to the mountains. He, too, lost someone close to him but was able to quell his grief through vengeance. Bruce, however, disagrees, knowing the consuming power of hatred. For his monologue, Liam Neeson allows pathos into his gravitas while Christian Bale reacts with subdued determination. After a nimble representation of how Bruce attained the skills for his alter ego, Nolan chooses to dig deeper into why exactly this lost man turned hot-blooded rage into utilitarian gallantry. 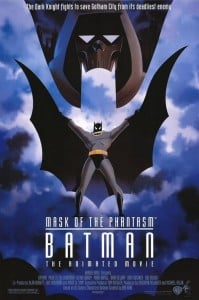 Animated films are hardly ever known for their gravitas. But the first and only theatrical animated Batman feature carries more gravity than most of its live action counterparts. The thrilling conclusion occurs in an abandoned “Gotham of Tomorrow” expo, a mechanical utopia of the future that has been left to rot just like present day Gotham City. In the final battle between Batman, the Joker, and Andrea (the woman Bruce intended to marry, who has been masquerading as the ghostly Phantasm), the Caped Crusader realizes that he can’t thwart the Joker’s madcap mayhem any more than he can cure Andrea’s inconsolable wrath. The scene culminates with the chilling image of the Joker on his knees in Andrea’s clutches while the once bright and shiny “future” of Gotham burns to the ground. They, like Bruce Wayne and Gotham’s dreams, disappear in a plume of smoke.

The official meeting between the Batman and the Joker is a tense and powerful culmination of two forces on opposite ends of the spectrum, one valiant and the other utterly demented. In police custody, the Joker finally gets his sit down with the Bat, who hopes to interrogate–then beat–his nefarious plans out of him. As the soon to be Dark Knight lays blow after blow, the Joker simply cackles his head off, loving every minute of it.  Brute strength versus vicious immorality. It’s a fiery combination that leads to one frustrated vigilante and one gleeful supervillain. Heavily influenced by Michael Mann’s Heat (which is legendary for its pairing of Al Pacino and Robert DeNiro in a simple one on one), The Dark Knight took two of the most iconic characters in all of pop culture, paired them with two of the best actors of their generation, and brought them together with a director of impeccable vision. The result is a potent moment as awesome as any car flip and as pure cinematic joy for Bat-fans as could have ever been imagined.

“He gave us the signal.”

It was the final sequence of Tim Burton’s first Batman that arguably turned more superhero starved adolescents into Batman fans than any other imagery before it. The Joker has been defeated, Vicki Vale has been rescued, and Gotham has been saved. All that’s left is for the city’s hero to have his symbol emblazoned in the sky. Panning up the Gothic spires of a shadowy edifice, the camera finally settles on Batman standing atop it, accepting his mantle amid his beacon in the night sky. Whether earned or not, this final image, with the rousing reprise of Danny Elfman’s theme, concluded the film on a wave of triumph.

It ends with a quick cut to black and a flash of the title. But it really takes the entire 152 minute running time to encapsulate the intense power of The Dark Knight. The best summation is the final montage, a time and character spanning window into the fallout from the film’s events. Batman has chosen to take the blame for Harvey Dent’s impulsive crimes, and Commissioner Jim Gordon has complied with his most trusted ally. With the Batman labeled Gotham’s Most Wanted, the Bat-signal and his unlawful surveillance machine are dismantled, the devastating truth about Rachel’s affections for Bruce is never revealed, and most importantly, Harvey Dent’s reputation is kept intact. In keeping the bright lights of Gotham still shining, four souls (Bruce Wayne, Alfred, Gordon, and Lucius Fox) each have to lose a piece of their own. Set to Hans Zimmer’s and James Newton Howard’s pulsing strings and percussion, director Christopher Nolan closes his crime opus in as artful and elegant a way as possible. 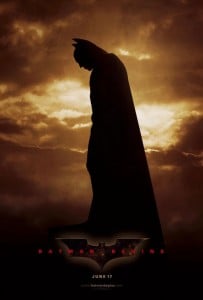 Call it a scene. Call it a moment. It’s the image that solidified Christopher Nolan’s Batman franchise as the definitive modern telling of the Dark Knight. Long reduced to dreary excess or high camp, for decades the Batman films suffered under the guise that high drama would have to be sacrificed for high entertainment. So scenes (and images) that not only captured the awe of the Caped Crusader but captured him in a context respectful to his comic book origins were scrapped for quick and easy and bombastic jolts of fancy. In Batman Begins, there’s nothing on display but the sheer power of one iconic figure: the Batman, after announcing himself to ruthless crime boss Carmine Falcone and stringing him up for Gotham Police Sergeant Jim Gordon, stands tall on a ledge, awaiting the coming sun and watching over the city that he has sworn to protect. Perfect.

Batman: Mask of the Phantasm– Batman swings off into the night 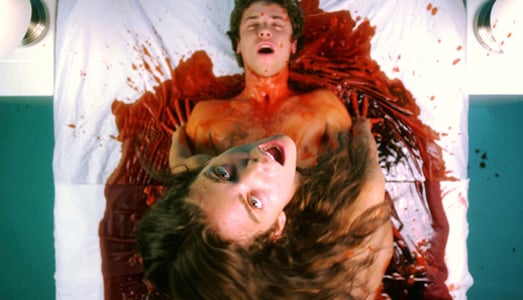 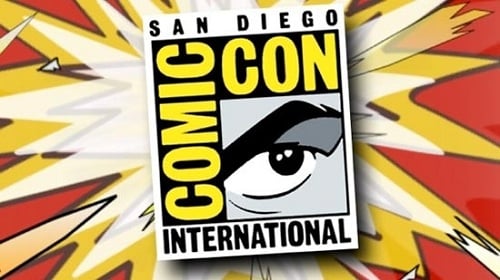