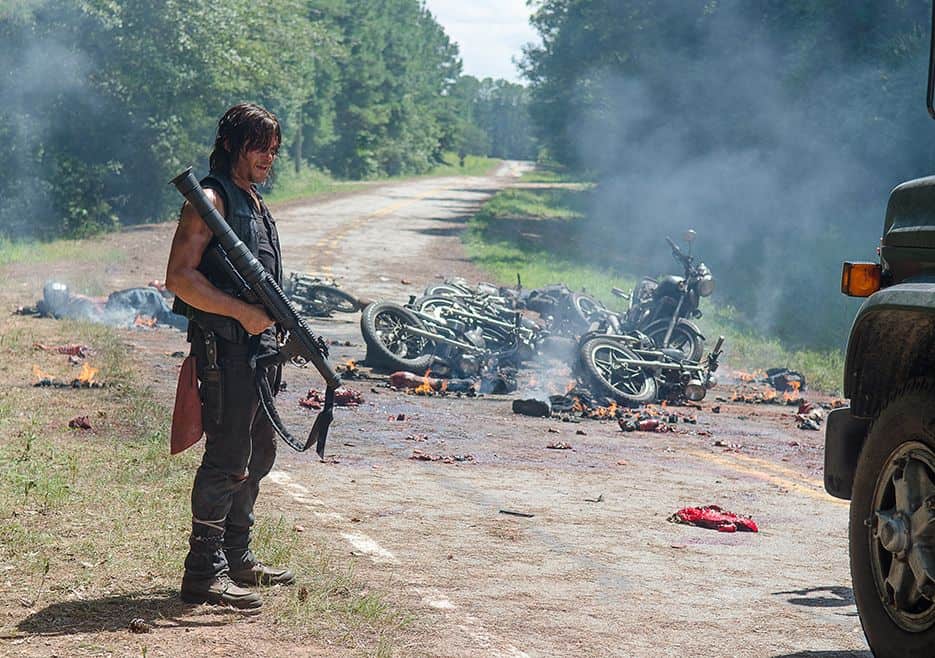 The Walking Dead, Season 6, Episode 9, “No Way Out”
Written by Seth Hoffman
Directed by Gregory Nicotero
Airs Sundays at 9pm (ET) on AMC

When we last saw our heroes Abraham, Sasha, and Daryl, they found themselves at the butt-end of a massive ambush when, after heading back home, were pretty much at the mercy of a group of bikers. Their entire load of supplies were pretty much being turned over to this group run by the enigmatic Negan, and they had no choice but to give it all over and pray for their lives.

“No Way Out” is brilliantly edited and wonderfully directed (by effects-makeup maestro Greg Nicotero), in that the prologue really takes your mind off of what is happening at Alexandria, if for a moment, simply because three of Rick’s strongest soldiers are at the mercy of these maniacs. They want to send a message to their leader, and are fully intent on sacrificing one of the soldiers. Sasha plays it quite well, trying to appeal to their humanity and common sense, but Abraham knows what they’re in for. Abraham knows they’ve made up their minds and there’s no going back. Thank goodness for Daryl and his rocket launcher. Not only is the massive slaughter of this group indicative of how well Daryl can think on his feet, but I’d wager any amount of money that Daryl has written his death warrant with that brilliant shot. If Negan has a tracker on his crew as talented as Daryl, eventually Daryl will have a giant target on his back.

That said, “No Way Out” quickly switches gears to walker havoc, with the episode set only moments after Rick and the group escape their house with their walker ponchos intact. “No Way Out” plays out in more or less the way the comics do. AMC and Scott Gimple are finally veering closer to the source material and mining more and more material, and the drama and conflict here is just as mesmerizing. Nicotero knows how to play the sakes beautifully, and zeroes in on the characters at all corners. Denise is still the hostage of the wolf, Glenn is trying to get to Maggie with Enid in tow, Carol and Morgan pretty much have to put aside their differences to help the town, and Rosita is hell bent on also minimizing the walker population running rampant on Alexandria.

Much of “No Way Out” is a revelation in that it finally signals a turning point in the town and their fight for survival. All along, we’ve been left wondering if Alexandria is at all worth saving, and sure enough, “No Way Out” proves that Alexandria is a resource worth battling through an army of the dead for. As usual, Rick is the source of inspiration for the entire town. He may not always come off as a saint, but in the end, Rick knows what to do and how to get the job done, and he shows that it takes a village to save their community, and to prove that they can rebuild from the ashes. Their losses have been beyond words, but they at least have a town that they can turn around and transform in to a blossoming cul de sac. “No Way Out” promised a myriad massive gut punches, and it delivers big time. Along with the introduction of Negan’s forces, the episode completely obliterates an entire family in one continuous sequence that amounts to one of the most chilling in the entire series run.

The collective death of Sam, Jessie, and Ronnie is right up there with Sophia coming out of the barn, and Morgan reluctantly trying to execute his walker wife. Nicotero handles the sequence with awe-inspiring blackness, revealing one of the very rare instances of a child walker. This is an instant emotional dead end for Sam, who freezes in his spot. His emotional breakdown immediately transforms him into walker food, and sadly, Jessie’s inability to comprehend the sight of her son being devoured prompts her to befall the same fate as Ronnie and Rick look on. Paired with the gut-wrenching flashbacks of a simpler time with her, Ronnie looks to even the score, and Michonne makes a hard call, impaling him with her katana and ending his sabotage on their attempt to get away from the massive herd.

Unending kudos goes to Alexandra Breckinridge, who lent the show a distinct charisma and dramatic facility in her brief stint as Jessie. Even as a frumpy mom and housewife, she glimmered. The disturbing and haunting end of the Anderson family hit a daunting crescendo as Carl is hit with Ronnie’s stray bullet, hitting him in the side of his head and taking out his right eye. For folks that read the comics, this is one of the most shocking episodes of Carl’s battle for survival, and here it’s just as horrific, thanks to Chandler Riggs’ horrific line delivery, and Nicotero’s amazing prosthetic work. “No Way Out” is a huge turning point in the series, which reveals a lot about this universe in a short time with subtle bursts and massive explosions.

Gabriel finally steps up to be a competent soldier for Rick, saving Judith and going in to combat after a pointless praying session, Denise takes charge as the only source of medical care in town, Morgan and Carol put aside their differences to help Rick, the Wolf even reveals that Morgan affected him in some respect, and–hey, look! Heath is still on the show! The banner moment of “No Way Out” is the convergence of Rick’s forces and Alexandria’s people to finally risk their lives for the greater good. It’s what Rick has been trying to inspire for a very long time, and it’s awe-inspiring to see people working as one unit to destroy the force of the walking dead and set aside petty differences for once. As with most episodes of the series, there’s a glimmer of hope with a promise of impending doom right around the corner.

The unity of the Alexandrians is going to be put to the test more than ever before. If AMC insists on continuing the gimmick of halving each season, “No Way Out” is the perfect debut for the final half of what’s been an incredible season both creatively and dramatically. If “No Way Out” hasn’t converted you to the church of The Walking Dead and the gospel of Rick “MF” Grimes, then you’re beyond saving, and I’ll pray for your soul.