One week before the season finale, The X-Files reboot finally airs a mostly dramatic episode. After showing its comedy and horror chops in “Mulder and Scully Meet the Were-Monster” and “Home Again,” respectively, this week’s “Babylon” is a story that attempts to take on serious topics without relying (much) on paranormal tricks. The result is a great idea in theory that gets dragged down by weirdly preachy dialog from series showrunner Chris Carter. But when “Babylon” isn’t trying to philosophize too much, it charms in several ways, the most prominent being how it uses the supporting roles of Agent Miller (Robbie Amell) and Agent Einstein (Lauren Ambrose) as Mulder and Scully parallels.

Miller and Einstein (she claims only distant relation) essentially occupy the same archetypes as their older counterparts: Miller is open to unorthodox methods to help with cases, while Einstein is much more practical. Miller seeks out Mulder and Scully in their basement offices, searching for a way to talk with a mostly dead person, which sets off a series of discussions throughout the episode about the ways in which we perceive reality. Amell and Ambrose are both excellent in their respective roles, and if this mini-season were just an excuse to reboot The X-Files with Miller and Einstein at the center, it would be a worthwhile endeavor. The chemistry is immediate, with the natural stiffness of Amell (which has worked less well in recent series for the actor) externalizing the kind of uncertainty that defines Miller’s worldview. When Einstein tries to congratulate him at the end of the hour, he humbly defers recognition to his peers. There’s also a tinge of sadness in the performance that hints at a deeper anxiety that would absolutely be worth pursuing in future episodes. Ambrose gets to have more fun as Einstein, since the character’s skepticism is enhanced by immaturity (she may hold several degrees, but book knowledge is much less valuable than practical knowledge for agents in The X-Files).

And “Babylon” is smart to split the pairs, giving Mulder the chance to wear down Einstein’s rigid beliefs and Scully an opportunity to show Miller how emotional vulnerability can be used as utility. The Scully-Miller material is much more familiar, recalling tons of hospital scenes from the series’ past, but having Scully be the indisputable agent of authority in the mentor role gives the setting a slightly different dynamic. The Mulder-Einstein material is…well, it’s about what one might expect, given that Mulder believes he is on mushrooms for part of it. During the trip, Mulder encounters the Smoking Man and the Lone Gunmen (!), giving fans reasons to cheer while laughing as Mulder dances and nearly gets hit by oncoming traffic. It’s fun in a self-aware, silly way, and it shows that Carter is still a talented director. 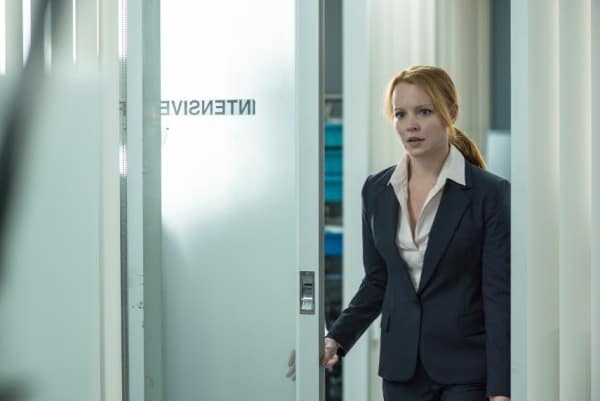 However, the meeting between these pairs of agents deserved a more thoughtful story to revolve around. “Babylon” tries to tackle Muslim extremism in America, and it does so rather poorly. There’s very little about the script—even when Scully says that not all Muslims are extremists—that displays any kind of knowledge about the topic that isn’t summative and cliché. The episode mostly takes place in Texas, a part of the country that is still teeming with racism, but it doesn’t give any kind of depth to any peripheral character, making them all look and act like stereotypes. In the final scene of the episode, the script tries desperately to re-contextualize ideas of the power of words to influence people to do things in a more global, somewhat religious sense, and boy, oh boy, does it sound cringey. Even coming from Scully, who has a defined personal spiritualism, the dialog between her and Mulder about what this entire experience has meant is easily the worst writing in any of these episodes so far, because it’s so non-specific and unnatural to the voice of the characters. Granted, these are two different versions from the Mulder and Scully of old, but this is the only episode in which they sound like different people altogether.

The most frustrating part is that it’s easy to see exactly what Carter is going for—he just falls incredibly short of delivering it. The better way to go would be to give voice to Shiraz, one of the bombers, during Mulder’s mushroom sequence so that other characters aren’t suggesting the ways that words are affecting him, but so we see that influence brought out in conversations that provide insight from one side of the debate that we don’t have access to otherwise. There needs to be something that makes the terrorism aspect of the plot more than just fear-mongering made dangerous.

It’s an unfortunate blemish in an otherwise solid episode before the final mythology entry of the season. Usually, The X-Files is able to communicate its theoretical ideas in smart ways, but “Babylon” is a mess where that’s concerned. Luckily, the rough edges look a lot better from a distance when seeing how well Mulder and Scully interact with Miller and Einstein. It’s pretty strange for a contemporary series to get by with just two central characters (even though Skinner is in the opening credits, he hasn’t been served well at all this season), so the additions of characters like these make episodes feel more full. Now, it’s on to next week’s finale, which has the difficult task of wrapping this short season up and delivering something that justified the return of the series beyond novelty.