It’s not clear what prompted The Walking Dead‘s recent turn towards overt sentimentality, but it’s far from the worst creative turn the series has taken. (Let’s all take a moment to remember the slow death march of Season 2 and shudder quietly to ourselves.) “Knots Untie” ranks among the series’ quietest-ever episodes, as well as one of its most peaceful – yes, things do get hairy for a second there, but this is The Walking Dead, and an episode free of bloodshed would be like Home Improvement without the laugh track. Still, this is a more patient, more humanistic version of the series than we normally get to see. Is is part of a long con on the part of Scott M. Gimple, an extended tease before the rug gets pulled out from under us and we’re reminded of the series’ pitiless, cruel sensibility, or something new?

Let’s be real, it’s probably the former. But let’s enjoy this warmer, cuddlier Walking Dead while we still can, 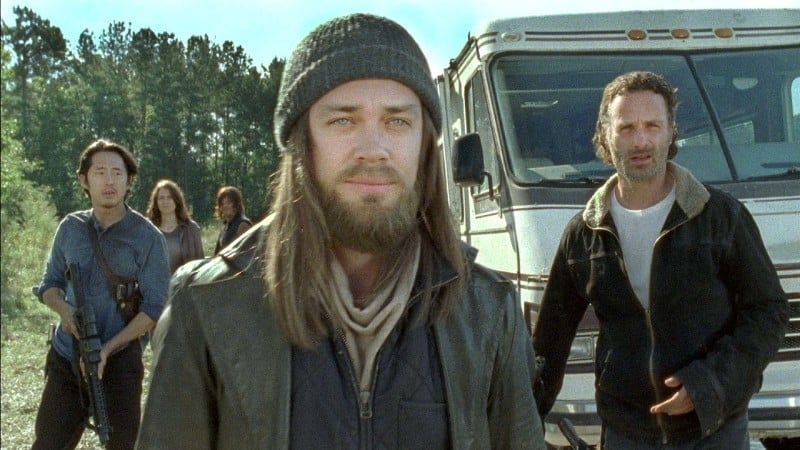 The surprise lynchpin of “Knots Untie” is Michael Cudlitz’s Abraham, and it’s a testament to Cudlitz’s appeal that he takes what could have been a deeply silly subplot – which of these beautiful young women will this 50-year-old man (with, admittedly, remarkable facial hair) settle down with? – and turn it into something half-effective. The “love triangle” element is groanworthy, but there’s some real meat to the question of what level of stability is acceptable to consider propagation. Here’s a good example of The Walking Dead taking something many of us ask ourselves – “is this a world I want to bring a family into?” – and applying it to its rather extreme scenario, finding a way to bridge its emotional reality to ours in a way that feels natural, something it hasn’t manages to do very often. Abraham’s pleasantly folksy way of discussing sensitive matters (“When you were pouring the Bisquick, were you trying to make pancakes?”) doesn’t hurt, either.

For an obvious “get the pieces in place” episode, “Knots Untie” covers a fair amount of ground in a non-insulting fashion. Rick and the gang approach Hilltop with exactly the right amount of caution – careful, but not psychotic – and in general there are refreshingly few examples of characters behaving stupidly just to help create further bloody calamity. The discrepancy between the spear-carrying Hilltop denizens and Rick’s commando squad even results in one of the series’ funniest-ever moments; after Rick slashes the throat of a Hilltop turncoat, resulting in a huge gush of blood that coats most of his face, Rick stands to face the traumatized locals and can only offer a dismissive “What?”. Yet even the comically brusque Rick is starting to develop a canny sense of his own limits, as we see when he lets Maggie take the lead on the Hilltop-Alexandria negotiations with the slimy Gregory (Xander Berkeley). (“Why?” “I shouldn’t,” he says, which is Rick code for “I will tear out his esophagus with my teeth.”) For her part, Maggie remains a stable source of sanity and pragmatism, and her canny sense of knowing when to mention that she’s quite married – basically, anytime she meets a man for the first time – is quietly hilarious.

For his part, Jesus goes a long way towards establishing himself as a compelling, trustworthy figure – with one little caveat. He lets Rick know that Hilltop has loads of resources and is willing to trade, then introduces their “prick” leader, but never once mentions that, oh yeah, they’ve been threatened into giving away half of everything they produce to Negan and his crew, who call themselves The Saviors, because irony. Some might call it canny narrative crafting; I call it burying the lede.

Besides that one relatively small logical leap, “Knots Untie” is the rare example of an incident-light Walking Dead that doesn’t feel like a massive waste of everyone’s time. The real question now: how on earth is The Walking Dead going to stretch out this skirmish with the Saviors over the rest of the season? Maggie warns that this new battle will cost them, and no one ever lost a dime betting on tragedy in this universe, but let’s hope the series doesn’t fall back on old habits when it comes to pacing out what’s sure to be a decisive conflict.

I can’t be the only one who hoped Maggie was going to steal Gregory’s precious painting as her last request. (She opts for the ultrasound instead.)

If you’ve never seen the visceral TNT cop drama Southland, you probably have no idea what Cudlitz is capable of, and you should really get on that.

Everyone on the show is weirdly stoked about Richonne, including Carl. Everyone enthusiastically backing an interracial couple is sort of heartwarming! (Also, if there’s been ugly backlash to Richonne, I really don’t need to hear about it, because it’s adorable.)