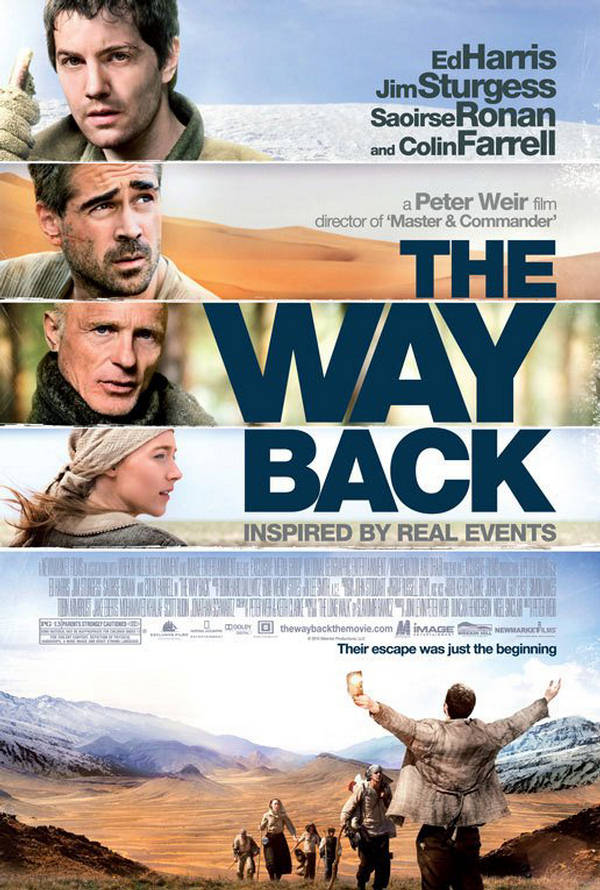 An old-school period epic in every sense of the idea, Peter Weir’s first film since 2003’s Master and Commander is a similarly pared-down, male-dominated tale of survival and strength of will, albeit tinged this time around with a sense of mild sociopolitical import. The Way Back, based loosely on Slavomir Ramicz’s book “The Long Walk: The True Story of a Trek to Freedom” (more on that later), hearkens back to pre-Basterds-style casting and English primacy; in other words, be prepared to hear Irishman Colin Farrell affecting a guttural Russian accent while British star Jim Sturgess tries on Polish. Don’t expect Herzogian veracity in respect to location, either: Bulgaria alone does triple duty as Siberia, Tibet and Mongolia.

Nevertheless, Weir is a sure enough hand that The Way Back mostly works. Sturgess plays Janusz, a political prisoner in a Siberian gulag whose wife, following a torture session, falsely outed him as a spy. Once there, he meets, among others: a gruff American (Ed Harris), an actor associated with undesirable material (Mark Strong), a common criminal with a violent streak (Farrell), an artist, and a former accountant (Romanian art-film fixtures Alexandru Potocean and Dragos Bocur). After getting consigned to the mines, Janusz and his friends elect to break out – a simple task compared to that of surviving the unforgiving Siberian wilderness and climate and ultimately trekking to friendly territory literally thousands of miles away. Some of Weir’s decision-making with regards to the material is curious. Ramicz’s book has been widely discredited as a memoir; via some of his own documents, it was discovered that Ramicz did not escape from his gulag but rather was amnestied, and made the not-quite-as-arduous journey to Persia instead of India, as described in the book. Weir wisely avoids outright “true story” signifiers (the book’s subtitle is excised in the opening credits), but hedges his bets by letting us know via introductory titles the number of men who will ultimately survive the trek – a decision that, given the heavily fictionalized nature of the film, serves little dramatic purpose save for dissipating tension later on in the film.

Yet for all of Weir’s tentativeness with the material, much of The Way Back is viscerally engaging, even occasionally moving. Harris’s weathered mug is ideal for the role of the grizzled ex-pat with a withering will to live, and most of Sturgess’ more irritating tendencies are hidden behind a Polish accent and an ever-increasing level of grime. The film also enjoys a much-needed injection of liveliness with the arrival of Saiorse Ronan’s runaway, who joins the escapees midway through the film in hopes of a better life. The real star of the film, of course, are the landscapes; The Way Back has the historical travelogue feel you’d expect from a film co-produced by National Geographic. But  Weir’s film also benefits from its sense of these characters as men (and a woman) caught in the way of political forces they understand all too well, and are powerless to do anything but survive in spite of. A little more verisimilitude might have gone a long way, but nevertheless The Way Back registers as a refreshingly humanist experience.