After a somewhat jumbled mess of a premiere, The X-Files settles into its Monday night slot with a more familiar, better-executed second episode. Like any good hour of television, “Founder’s Mutation” shows that it has the capacity to be funny, interesting and moving all at once, generating a huge sigh of relief for fans who had to endure the info. dump/narrative maze of “My Struggle” last night. This isn’t a great episode of TV, but it’s certainly good enough.

Where “Founder’s Mutation” succeeds most prominently is in its framework and structure. Beginning with the classic The X-Files formula of the cold open, opening credits and Mulder-Scully investigation, the episode looks and feels like a veteran procedural. The reveals and plot turns are spaced out, all leading up to a coda that gives the case-of-the-week content a second layer of meaning for our two main characters. Put another way, there is a clear beginning, middle and end to “Founder’s Mutation,” which is a formula that some series purposefully leave by the side of the road and do so successfully (Rectify), but which many more series (pretty much every hour-long drama on network TV) rely on as a guide for plot. The X-Files has always been conventional in this way, and relying on that structure here helps “Founder’s Mutation” feel like current television, rather than a ball of rolled-up fan service.

The themes of family and loss give the episode the depth it has, and while many viewers might not remember the ins and outs of the history of Scully and Mulder’s son, all that matters and needs to be communicated is streamlined within the episode, so that it never feels like the writing is trying to make the viewer feel guilty for not having all the details. While both of the main characters investigate a Dr. Goldman, whose genetic experiments on children have left his own separated, they each deal with the loss of William, their son, who is somewhere out there, though always close by in their thoughts. Smartly, the episode waits until its final moments to show that Mulder is just as conscious of the absence as Scully is, which helps to slightly subvert the tough-guy attitude he displays earlier by telling Scully that he’s had to move on. Visually tying William to Samantha emphasizes Mulder’s interior struggle now that he’s back to work on the difficult material that pushed him to the brink of death several times so many years ago. 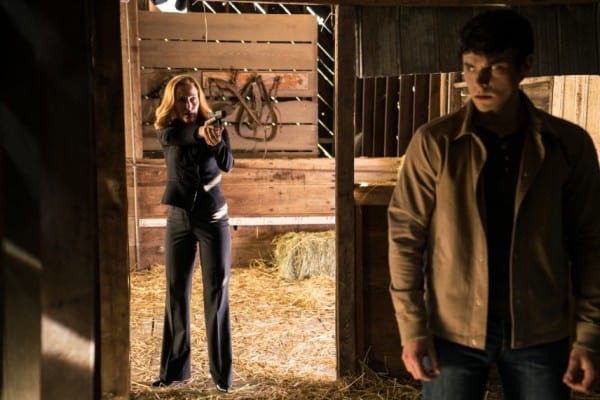 There are still kinks that haven’t been worked out, and while they’re noticeable, most of them are forgivable. This version of The X-Files is very keen to convince the viewer that it knows it’s 2016 with references to pre-Google research, Edward Snowden and Obamacare. Pop-culture references abound in all television, of course, but these ultimately feel forced, like the writing is trying very hard to sound natural. And, as was the case with the premiere, the weirdly graphic displays of violence don’t exactly fit the style or tone of the show. Rather than see Sanjay’s hand thrust the killing blow into his own head either blurred (with the camera focused on the background) or half on-screen, we see the act directly from beginning to end. So much of this kind of violence happens on television, but very few series find solid reasons to justify it beyond shock value. Finally, there are some…odd…lines of dialogue and bits of action, such as Mrs. Goldman throwing an apple at a cat (which, admittedly, was laugh-out-loud funny, though not necessarily as intended) and Kyle’s adopted mom saying “Bad things happen when the birds gather…,” which sounds more like parody than anything else.

Still, “Founder’s Mutation” gets enough things right so that it’s easy to turn a blind eye to some of its growing pains. Solid supporting performances surround the leads (it would go against my entire being to not jump for joy when seeing a Hannibal alumna—Kacey Rohl, in this instance—in this series), certain effects really pop (the gathering birds) and the social commentary on eugenics doesn’t come off as incidental or misguided. “Founder’s Mutation” is, at the end of the day, a perfectly serviceable episode of The X-Files, which is about where viewers’ expectations should have been set coming into the revival. Welcome back, Mulder and Scully.