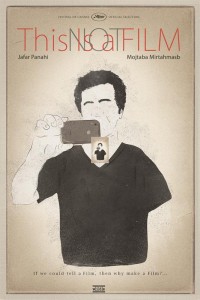 Panahi, clearly finding the confines of his house arrest stifling, decided to explore that question, enlisting fellow filmmaker Mojbata Mirtahmasb to help him avoid the darker grey areas of the ban. The result is the appropriately titled This Is Not A Film, a sort of video experiment/exploration that of course begs the question of whether or not it is actually a film. By Panahi’s strict reasoning it is not, or at least not a film by him. The definition of what This Is Not A Film is, as opposed to what is not is kept intentionally vague, a problem in need of an explanation.

“You can’t explain a film,” Panahi says. “You explain by making the film, the film is the explanation.” There are some ground rules, not always faithfully followed. Panahi allows himself to handle the cameras, but he does not turn it on himself, as that would be an act of initiation. When Mirtahmasb arrives at the apartment, Panahi proposes that he read and act out scenes – the ban does not mention reading or acting, he teasingly notes – from an unproduced screenplay he wrote before his arrest, about a young girl barred from leaving her house by her parents. Panahi tapes out blocking on his living room floor and begins walking through the opening scene, but has to quit abruptly out of frustration. “You can’t explain a film,” Panahi says. “You explain by making the film, the film is the explanation.”

Frustration is evident throughout. The Panahi family’s apartment is tastefully decorated and fastidiously clean, but there is something about the way the bright surfaces reflect so much light that would clearly become grating after a long period of confinement. He watches the devastation from the Japanese earthquake unfold on the news, and listens to pops and cracks coming from the street below his terrace (gunshots? fireworks?), but is stuck on the couch, his lap acting as a heating rock for his daughter’s giant iguana. We eavesdrop on conversations between Panahi and his lawyer that always end with a heavy depression creeping across his face. To express his state of mind, Panahi turns to his old films, seeing elements of his situation in the faces of young Mina from The Mirror, and in Hossain from Crimson Gold. Panahi pauses the DVD of the later film and notes the way that Hossain, an amateur actor, is in fact the real director of the film, giving Panahi his cues and not the other way around. He then excitedly points The Circle to show how the setting of a scene can determine its qualities far more than the input of the director can. All of this complicates the idea of the filmmaker and of filmmaking, digging into the actual mechanics of the medium. Panahi is engaging in a deconstructive, almost Derridian dialogue about his craft, the type of exercise that is often maligned as ineffectual and overly academic. But under the circumstances, it becomes a deeply emotional act of political resistance.

The film ends with Panahi taking his cues from another amateur, a fill-in custodian for his building. Panahi rides down the elevator with the young man while he collects trash, listening to him talk about his studies, which were interrupted by time in jail. When they reach the ground level, Panahi follows the young man to the gate, and on the street we can see a bonfire celebrating the New Year. “Don’t follow me out, or they’ll see you filming,” the young man says. That visibility would be a bridge too far.