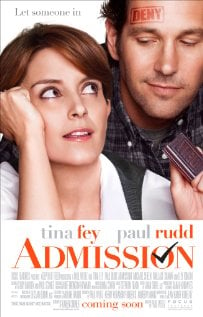 Tina Fey and Paul Rudd have, over the last decade, cornered the market on being professionally delightful. They are immensely likable if quirky performers, blending off-kilter comedy with movie-star good looks. As such, Admission, their first film together, has an affable charm for its first two acts almost entirely because if you place Fey and Rudd in front of a camera, it’ll be enjoyable to watch. As the story goes on, though, the script piles on too many reversals that negate all of the hard-won emotion that came before, muting Admission’s impact.

Fey plays Portia Nathan, an admissions officer at Princeton University hoping to be promoted to the role of Dean of Admissions after her boss (Wallace Shawn) leaves at the end of the school year. Her upward mobility hits a snag when she’s contacted by John Pressman (Rudd), a teacher at a progressive high school who has a student with a surprising familial connection to Portia. Much low-key drama ensues, and, of course, Portia and John begin a tentative relationship after her long-term boyfriend (Michael Sheen—sorry, 30 Rock fans, but no Wesley Snipes references here) leaves her for a fellow professor. 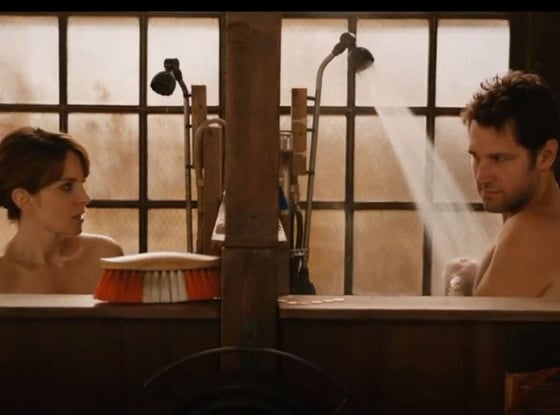 Admission’s strengths lie in its cast, especially Fey and Rudd. No one, for the most part, is asked to stretch all that much, though Fey is more sincerely emotional than she ever did on 30 Rock. (She pulls off a few mildly weepy scenes quite well.) Otherwise, you will be unsurprised to find that Portia and John are very much like Tina Fey and Paul Rudd. They’re well-cast, but there’s nothing particularly challenging onscreen. Among the rest of the supporting cast is Lily Tomlin as Portia’s selfish, tactless hippie mom; and Nat Wolff as Jeremiah, the teenager John has so much faith in to advertise to Portia, both for her intelligence and because John believes Jeremiah is Portia’s son, long ago given up for adoption. It’s that surprise, laid in Portia’s lap at the end of the first act, that sets Admission’s plot in motion.

And unfortunately, the quicker that plot moves, the more frustrating it becomes. Admission, based on the novel by Jean Hanff Korelitz, has a script (by Karen Croner) that may well be faithful to the source material. However, many of the surprises within that script, specifically to whether or not Jeremiah will be accepted into Princeton and to his ties to Portia, are confounding and only serve to quash whatever emotional bond we share with the two leads. And frankly, the story the movie tells versus the story that could have been is a little disappointing. Watching a woman handle the rush of feelings associated with confronting the child she gave up as soon as the delivery was finished is inherently compelling. With Fey as the lead, such a tale wouldn’t have to be morose or overly dour, but honest and insightful. What we have is a weird blend of standard-issue romantic comedy and painful reality. When the two collide, the former, more dominant side wins out, making for a vexing final half-hour. 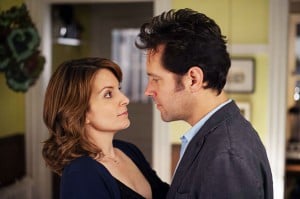 The few clichéd touches early on are equally troubling, but a lot more minor. Portia’s failed relationship turns into something of a running gag—every time she thinks she’s at her lowest point, she runs into her ex and his new lover, all immediately trying to exit the situation as fast as possible—yet even those interactions are too fleeting to be more than a minor nuisance. It’s when things get serious for Portia, John, and Jeremiah that the foundation of the story falls apart. Twists in movies aren’t automatically a mistake, but they have to pay off naturally. The way Portia reacts to John’s news, as well as the escalating, desperate choices she makes end up holding very little weight once that third-act surprise comes along. A good twist doesn’t make you question everything you’ve seen before, wondering if it made no sense.

Still, Admission is a decent enough film, though when you cast Tina Fey, Paul Rudd, and Lily Tomlin in a lighthearted comedy-drama together, decent may be the low end of the quality spectrum. This trio of comic performers are all so seasoned that their interactions are playful and clever enough. (Fey, in particular, has a number of very funny throwaway straight-man-style reactions.) Admission, however, doesn’t hit the same heights that something like About a Boy, also from this film’s director, Paul Weitz, achieved in blending truth and humor. Admission, unfortunately, has a story that’s unable to get out of the way, obscuring the innate winning charm of its leads. 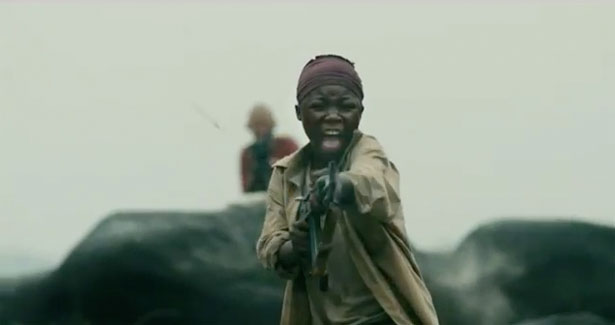 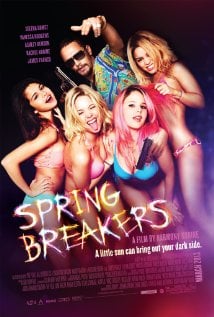