In 1939, British Prime Minister Neville Chamberlain asked the BBC to gather their best comedy writers to create satirical caricatures to delegitimize and discompose Germany’s leader, Adolf Hitler. With a diminutive stature, ludicrous hair and a literal comedic moustache, Hitler became instant ‘comedy gold’, and in Hitler: The Comedy Years, director Jacques Peretti shows us how it all happened, and why we still like to take the piss out of ol’ Adolf. 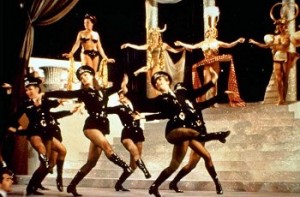 To track the highs and lows of Hitler related comedy, Peretti uses a long list of films and television shows that range from Charlie Chaplin’s The Great Dictator, to Mel Brooks’ The Producers, and sketches from Monty Python. As well as including smaller, more unfamiliar films, the documentary also relies an awful lot on British sit-coms, which will surely confound viewers on the wrong side of the Atlantic.

The 48-minute documentary, which hails from the UK, was meant for British television, assuming that the viewer has prerequisite knowledge of the shows. Those who don’t will find it hard to appreciate the careful analysis that the film accomplishes. At times, it can feel like a chain of movie reviews about films you haven’t seen before. Nevertheless, comedy is a universal language, and while watching Hitler: The Comedy Years, the laughs are as ubiquitous as they are timeless. The clips that the film compiles from different media sources are mostly funny, even though the movie’s own attempt at humour are mostly not, but all can be forgiven with its cheeky and unabashed tone.

Couple this with occasional trivia peppered into the film, Hitler: The Comedy Years stands as a film that’s both witty and funny – unlike Hitler (that was a joke).