There have been very few satisfying horror movies in the last decade. As for most of those that were in theatres, I’ve literally sat there screaming “Don’t look under the bed!… Why are you going in the closet?! … Look, everyone heard the noise! You heard it, I heard it, the guy four rows back heard it! It sounds like a bloodthirsty monster! Why are you going in after it?! For god’s sake, RUN!!!!” You know the films I’m talking about: remakes like One Missed Call and The Amityville Horror, Saw part one billion, The Haunting in Connecticut in which the main character knowingly sets up his bedroom in the basement, formerly a mortuary!

You catch my drift.

That being said, amidst all the trash there have been some doozies that have sparked some hope in my warm heart that the genre is far from dead, with their creators’ refreshing takes on the slash-happy, wicked, and utterly impossible world of horror. Here’s my top 10 over the past decade. 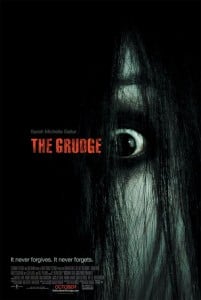 On a crazy whim, I decided to go see this movie at the theatre, alone. Bad idea. EEK! Director Takashi Shimizu, who also wrote and directed the original Ju-on, brings us back to the same Japanese neighborhood, even the same house. There isn’t as much subtly here as in Ju-on, but boy does it work. The one fundamental difference is that now, the curse of the Saeki family widens its evil embrace to include some unsuspecting American outsiders. Karen Davis, a young American nurse, moves to Tokyo and while caring for an elderly client, encounters a vengeful supernatural spirit. A series of horrifying deaths occur as the spirit passes its curse onto each victim. The American must now find a way to break the spell before she becomes its next victim. Two parts creepy Japanese horror hair, one part Hollywood cookie-cutter scare, a dash of B.S. and a few drops of swamp water and you’ve got the recipe for The Ring, Gore Verbinski’s remake of Hideo Nakata’s Ringu. Although it does get bogged down by multiple climaxes and too many themes, there are many good moments in this film. The plot is pretty simple: cursed VHS tape, you watch it, you get a phone call, the voice on the other end says “Seven days”, you’ve got a week to live. Bubye. After her niece watches the tape and is literally scared to death, Reporter Rachel Keller played by Naomi Watts decides to investigate. Of course, she watches the tape too and then has seven days to figure out how the hell she’s going to save herself. The tape is sinister and nightmarish filled with a series of images that are a visual assault on your senses. The terrifying visions and odd metaphors begin to add up at an ever-increasing pace in this mystery, thriller, horror roller coaster until they culminate in a sick plot twist. Evil. And so sweet. 28 days after a virus hits London, four survivors fight to stay alive amidst mobs of howling, crazed zombies that move faster than any I’ve ever seen. Jim wakes up in a deserted hospital and wonders where everyone’s gone. Betwixt fighting off zombies and trying to understand what’s happening, he meets up with another survivor, Selena, who lets him in on what she’s discovered: if one of the ghouls bites you or slobbers on you, you’ll mutate into an undead lunatic. Along with two others – cabbie Frank and his teenage daughter – they flee London for whatever awaits them. I have to admit that the movie falls apart when the group reaches a fortress manned by a bunch of soldiers who start eye-balling the women. Typical. Until then, fantastic and incredibly unnerving. 7. A Tale of Two Sisters

Writer/director Ji-Woon Kim masterfully tells the tale of two young girls recently released from a mental institution. They returned home to live with their ominous father and neurotic stepmother. Their recovery is hampered however by the stepmother’s increasing cruelty as well as a ghostly presence in the large house. It’s cleverly unclear what the truth is. Are the meds to blame? Are we in the midst of some mentally ill hallucination? And if so, whose hallucination is it? In the first Korean film to be screened in American theatres, Kim brings a fresh take to old Korean themes like domestic facades, haunted children, extreme femininity, impotent fathers, etc. The acting is impeccable and the filming by Kim is skilful and effective, keeping the audience guessing and covered in goose bumps. The final act could have been handled better though, as Kim’s presentation becomes a bit confused in a montage that inspires more questions rather than providing a solid conclusion. This director is totally mental, controversial and eclectic to say the least. Miike Takashi, who brought us Ichi the Killer, is one of the best horror directors out there today. Here he creates the story of Shigeharu Aoyama, the owner of a video production company whose wife died seven years earlier. After his son suggests he should re-marry, Shigeharu and his colleague use a casting session to audition potential wives. Shigeharu finds the ideal woman: a beautiful, timid 24-year-old ex-dancer, Asami Yamasaki. Despite warnings of the girl’s mysterious background, Shigeharu pursues the relationship. We soon find out however that his future wife has a past filled with horror and abuse that has left her with a twisted desire for vengeance. And boy, does she take vengeance. Let’s put it this way: at one point I had to look away and put my hands over my ears. EEK! What I thought would be another horror movie about a clump of long black hair getting caught in my throat, proved to be a very disturbing, restrained, well-spun tale. The 2004 Thai movie Shutter by directors Banjong Pisanthanakun and Parkpoom Wongpoom was refreshing, if I can say that about a horror movie. Shutter tells the story of a photographer named Tun and his girlfriend who are haunted by a woman they accidentally ran over while driving one dark night. Hallucinations of the woman’s ghost begin to plague them and one by one, Tun’s closest friends start to die off. Of course, there’s more here than meets the eye and Tun’s got the inside scoop. The ending is perfect and chilling and it made me smile with satisfaction. Am I sick? Yes. Do I like great horror? Yes. Should you see this? Yes. This movie came out before the vampire craze grew bat wings and took off. Director David Slade’s tale takes place in an isolated Alaskan town which spends 30 days of the year in total darkness. Cool, right? Well, it would be cool unless of course you’re being stalked by vampires. Most of the residents don’t want to live in the dark for 30 days, so they skip town for the time being, leaving only a hundred and fifty or so folks to man things. Even before the sun goes down for the last time, the vampires are scheming. Satellite phones are destroyed, the town helicopter damaged, and important infrastructure sabotaged. Before the remaining town’s peeps can figure out what’s happening, the sun goes down and the vamps are on the hunt. Danny Houston as the head vampire dude is terrific and horrific. Ben Foster as the slimy new guy in town is amazing, as usual; He sinks himself into his roles so deep that he becomes unrecognizable – Too bad he wasn’t more prominent in the movie. Josh Hartnett and Melissa George give some solid performances, as does the rest of the cast. Definitely nerve-wracking and intense. You’ll be dragged kicking and screaming through the streets of this tiny Alaskan town and you’re gona like it. Guillermo del Toro is one of the most fascinating writers/directors/producers of our time. He creates accessible, intelligent, fantastical, tight, creepy films with great casts. El orfanato or The Orphanage was no exception. He produced it with Juan Antonio Bayona directing and Sergio G. Sánchez writing the screenplay. The story is about a woman named Laura who returns with her husband and young son to the orphanage where she grew up, intending to restore it and turn it into a home for disabled children. But once they arrive, her son begins to imagine terrifying things, warning her of an evil presence in the house. The tense, eerie nature of the film grows steadily, seamlessly, and along with Laura, we began to piece together the ghostly puzzle. See it. It’s so rare that you leave a horror movie with the fear following you for so long after. There are only a few movies I feel this way about, one of them being The Exorcist. What I really loved about The Blair Witch Project was that each individual movie-goer was left to fill in the blanks for themselves, each an active participant in creating the horrific. Genius. Three student filmmakers set out to make a documentary on the legend of the Blair Witch. They enter the woods on part of their data-collecting expedition and none of them are ever seen again. One year later, the tapes they made on that trip are found. The film is innovative and dynamic on a barely-there budget with little-known actors, each delivering award-worthy performances. The handheld camera work drew me to the edge of my seat, feeling their anxiety, fear, desperation and eventual hysteria as they try time and again to escape. See this now if you haven’t already: one of the most original horror movies in years. I love this movie. A 2008 masterpiece, Let the Right One In is a low-budget Swedish film from director Tomas Alfredson and writer John Ajvide Lindqvist, who also wrote the book. The mood, subtleties and timing of this film are so rare in mainstream movies that once over, you understand how quality-starved society actually is. The acting is some of the best I’ve ever seen. 12-year-old Oskar, seemingly the town loser, is bullied by school kids on a regular basis. Vampire Eli arrives on the scene just in time to help Oskar. The two become fast friends and eventually a romance begins to bloom. But after a series of murders, Oskar discovers Eli’s dark secret. This story is violent and romantic and minimalist, one you can genuinely sink your teeth into.

Honorable mentions: House of 1000 Corpses, The Devil’s Backbone, Slither, The Others, High Tension, The Descent