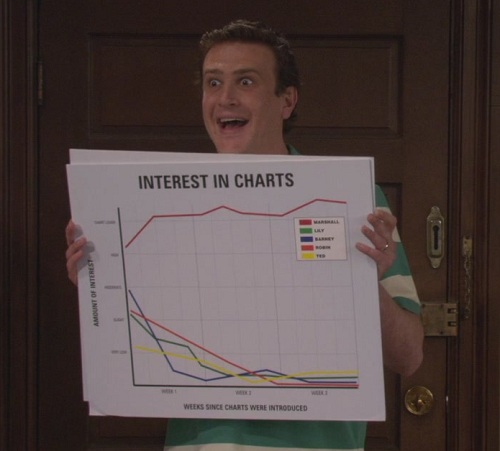 I’m a nerd. I like data. Spreadsheets are fun and I have a nearly Marshall Eriksen-level affinity for charts. When I decided to look into high school-based television series for my next article, my first stop was Wikipedia and its page on high school television series (This is why I’m not an actual researcher). Initially, I was interested in investigating what makes some fantastic, realistic high school shows successful (The Wonder Years, for example), while others disappear after one season (Freaks and Geeks, My So-Called Life). I also considered looking at the cheesy, silly, and fun series that often are left out of the “best high school show” discussion (Welcome Back, Kotter, Saved by the Bell, Boy Meets World).

However, when I saw the size of Wikipedia’s list (136 series), the urge to tabulate rose up and my inner geek took over. After breaking down the shows listed, I did a bit more research to add in the missing American series I could find and ended up with a list of 148 series**. Yes, the list that this data is drawn from is in no way complete and there are probably many, many series that are missing from it and yes, older series are probably strongly under represented. In the scheme of things, however, 148 feels like a pretty solid sample set; here are the results of my investigation.

**The 12 series represented below that aren’t on Wikipedia’s list are: The Many Loves of Dobie Gillis, Happy Days, Blossom, That 70s Show, Roswell, Strangers with Candy, Joan of Arcadia, The O.C., Everybody Hates Chris, Skins (UK),The Inbetweeners, and Skins (US). 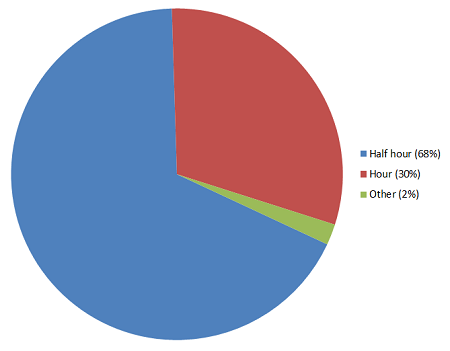 Of the 148 series, 100 are half hour series, 45 are hour-longs, and 3 are other. The roughly two-to-one ratio of 30 minute shows to 60 minute shows is unsurprising. It mostly suggests that networks have a certain number of hours that they are looking to fill with high-school or teen-based programming and that there is a roughly equal interest in a two-half-hour-series block and a one hour series. 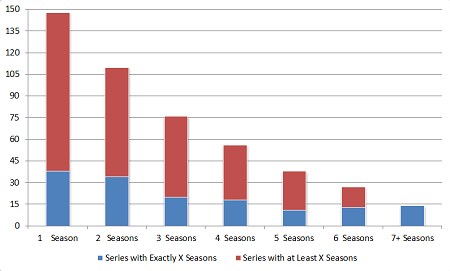 This graph represents two sets of data. The blue bars show the number of series lasting a set number of seasons, while the red add on the number of shows lasting more than that number of seasons. Taken as a whole, the series form a clear pattern of exponential decay over the course of seven seasons. This looks fairly straightforward, but a more interesting story is in the blue data. Almost half of the series (72) last either one or two seasons. This accounts for the series that are unable to find audiences. A significant number of these shows only make it a few years beyond that point (20 and 18, respectively), which, considering high school itself only lasts four years, is not surprising.

More interesting is the large drop off that occurs after this. The data suggests that once a series makes it past its fourth season, it has a higher chance of going the distance. Fewer series are cancelled after five years than after six, and fewer are cancelled after six than after seven or more. This is particularly surprising because the magic number for American syndication has traditionally been 100 episodes, which, following the average American TV schedule, happens during the fifth season. Because of this, some networks are willing to give bubble shows a fifth season. The fact that more high school shows make it to seven or more seasons than get cancelled after five suggests a particularly loyal fan base. 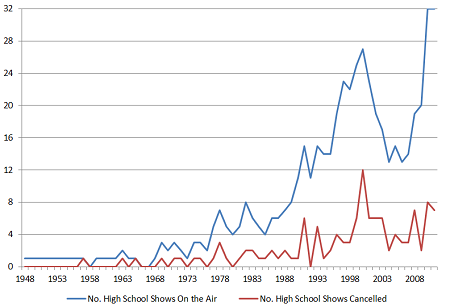 This graph charts the premiere and cancellation info for the data set. The blue line shows the total number of shows on the air in a given year, while the red line shows the number of shows cancelled in that same year. In general, they follow the same trajectory. When there are more shows on, more shows end up getting cancelled. The series list is weighted towards more recent series, with older shows more likely to be missing from the data pool, but even so, this data shows dramatic growth from the mid-eighties to the late nineties followed by a dip and another sharp upward trend in the mid aughts.

The first spike is perhaps attributable to the birth of cable TV. With a greater number of channels all needing programming, the overall number of series ballooned at this time. The overexpansion corrects itself through the late nineties and early aughts, but then goes right back up. This second blue spike is explained by the matching red dip. Very few series were cancelled in 2009 but, unlike previously, this had little effect on how many new shows were picked up. With increased interest from older demographics for so-called “teen” shows like Gossip Girl and Pretty Little Liars, the viewer base for high school programming has expanded, and the networks have responded to this. It will be interesting to see what happens to this trend over the next several years. 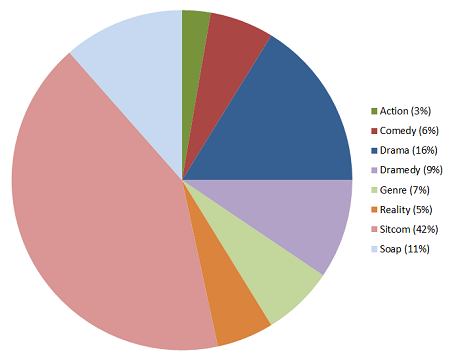 This is a genre breakdown of the list. Despite recent trends in popular culture, genre and action series make up only 11% of the series. It would appear vampire fever hasn’t fully taken over the high school realm yet. Though the high school shows most popular at the moment are soaps and dramas, sitcoms still rule overall. The WB/CW drama/dramedy legacy can’t overwhelm the combination of the TGIF, TNBC, Disney, and Nickelodeon lineups. Sitcoms would have had an even stronger edge had this included junior high and tween programming, which have coopted over the after school kids realm that was so long the purview of high school series. Also surprising is just how few straight up comedy series there are- these are more unconventional series that don’t fit as easily into the sitcom format. As for reality, these are mostly documentary programs following either a group of students or a teacher as they navigate a particular high school. 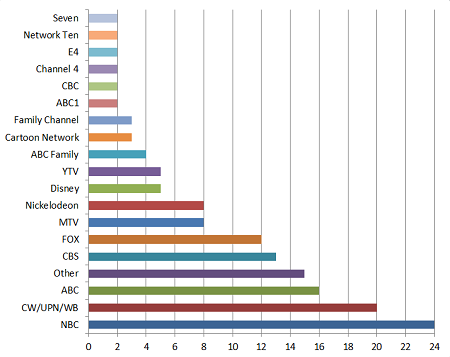 Finally, here is a chart showing what channels these shows premiered on. Some changed network during their runs, but these are who picked up the shows to start with. The CW, UPN, and the WB are combined into one due to the sheer number of shows that switched between these networks. Other is a compilation of 15 networks which each had one show. The network most invested in high school programming is, surprisingly, NBC. It has twice the shows of FOX and nearly twice that of CBS. The WB began as a network geared towards teens and young adults, so its second place ranking makes sense, but NBC has 16.67% more than even the WB, UPN, and CW combined.

NBC has been floundering in recent years, trying unsuccessfully to reach out to viewers and decide on its brand. Perhaps they should be shooting for the teen market. Or, rather, perhaps they should be fleeing it, as FOX and CBS, the two highest rated networks, are those with the smallest history of high school based programming. The broadcast networks are in nearly inverse position to their current rankings- switch CW and NBC, and there would be a direct correlation. Of course, correlation doesn’t equal causation, but it’s interesting none the less. Another interpretation is that, due to their success, FOX and CBS haven’t launched as many unsuccessful shows. However, the two-to-one ratio of high school shows between FOX and NBC seems a bit extreme to be solely due to this aspect of the business.

Some final bits of data that, alas, I couldn’t fit into a chart or graph. 19% of the 148-series list is international (12 Canadian series, 7 Australian, 6 British, 2 German, and 1 Philippine), 5% is animated, and over 13% of the series are remakes, reimaginings, spinoffs, or shows that are in some other way based on previous material.

What did you think of this article? Should I delve into stats in the future, or leave them in the dark, dank corner of the interwebs where I found them? Post your thoughts below.