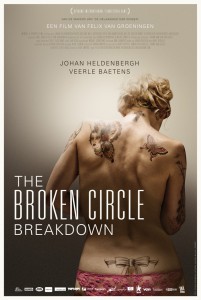 Bjorn Eriksson’s original score of electrifying bluegrass melodies performed throughout Felix van Groeningen’s The Broken Circle Breakdown, resonant from the most upbeat country foot-stomping fun, to the bellows of somber sorrowed hymns. The Belgian director’s drama about a love drunk, star-crossed relationship struck by grief encompasses unfathomable measures. With many highs and lows, The Broken Circle Breakdown is a raw and realistic look at life’s unexpected occurrences done so with great tenderness and reverence to both joy and pain.

When Elise (Veerle Baetens) and Didier (Johan Heldenbergh) meet, it’s love at first sight. When they move into an old farmhouse where their daughter Maybelle is born, their happiness reaches its zenith. But when leukemia strikes the hopeful new family, these two very different lovers are forced to fight for the extent of their love. Elise finds comfort in spirituality, while Didier grounds himself in atheistic realism, and the two test themselves as they drift farther away from each other. Very heavy in subject matter, the film balances tone with lighthearted song and dance. What may be contradictory to some, the toss between its somber plot and uppity musical interludes is quite refreshing. Ultimately the film is an expression of life, filled with ups and downs. While raising a ton of questions about faith and singles out fantastical raw emotions by great performances; the film will make you laugh and cry all in one breath.

The history of the eccentric couple unfolds in a whirlwind of non-linear story structure, working in screenwriter Carl Joos’ favor. Maybelle’s chemotherapy treatments weave into their flirty first acquaintance. A shotgun wedding quipped with a horrid Elvis impersonator interrupts blistering outbursts set forth by Elise’s depression. Exquisitely portrayed, what the audience gets is an all too real slice of life. Gripping, enchanting, and to some, all too familiar are the moments conveyed in The Broken Circle Breakdown.

Equally as non-linear as it is contradictory, certain scenes play off with grand juxtaposition. As Maybelle takes her first steps, seemingly an uplifting milestone, news footage of the World Trade Center attacks lurks on the television in the background. When Didier erupts about the hypocrisy of pro-life politicians embracing capital punishment but putting down embryonic research, the film treads a line of political statement making without ever getting to heavy handed. Instead, the audience is laced with friendly bluegrass and lighthearted welcomes of “The Lion Sleeps Tonight” as Maybelle comes home after her first round of chemo.

The film certainly takes itself very seriously, but checks itself quite frequently with upbeat song performances, proclaiming itself as a film of emotion rather than context. Just like its characters, The Broken Circle Breakdown doesn’t know what type of film it wants to be. It’s free and constrained. Funny as it is tragic. Yet, when the film ends, the audience is well aware that it’s all these things. There is no confusion that the story that Groeningen and Joos give us is, in fact, the story of life itself. 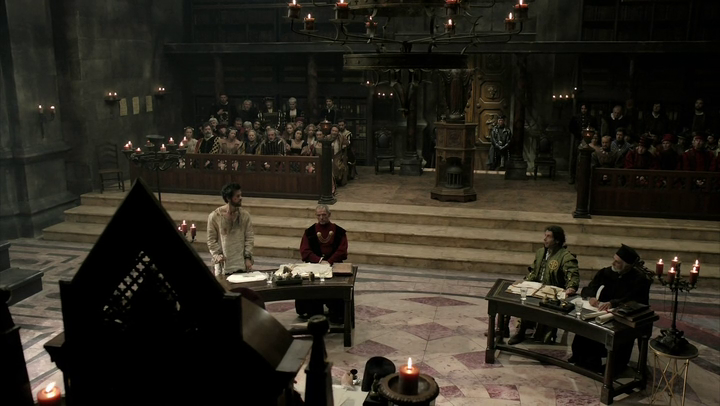