It’s a pretty good bet that you had a decent December 25. Spending time with, or as they case may be, away from your family or just basking in the loving glow of rampant consumerism. Even if you don’t celebrate Christmas, it’s a day off from work, school, or whatever. For most people Christmas is a pretty great day, regardless of whatever is going on in the world around them.

There’s one group of people that didn’t have a great Christmas: Valve employees. For several hours on December 25th, during Steam’s biggest sale of the year, they had to take the community and store services offline. The short version of what happened is that due to a mixup in Steam’s caching system users were being logged into different user’s accounts. While that may sound humorous, people quickly realized that this meant whoever was logging into their accounts could get access to things like payment history, email accounts, and other personal detail that people don’t usually give out publicly, especially when it comes to shopping. Valve maintains that it’s impossible for anyone to get a hold of payment info from this, but across the internet people are posting images of massive Steam bills appearing in their emails. Take these with a massive grain of salt, as you should everything you see online.

This raises an interesting point though, that Steam is a deeply flawed system, and Valve is a deeply flawed company. This isn’t the first time we’ve seen an outrage surrounding Steam: In early April we saw the creation and almost immediate termination of paid mods. Valve is being sued in France over the right to resell used games. One employee was caught trying to de-list the controversial title Hatred prior to its release. Then there’s the constant stream of complaints about Steam’s customer service issues being one of the worst in the industry, right up there with EA’s legendarily uncaring and unqualified support team. The height of this came after Steam, the most beloved and treasured store-front for many in the PC gaming world, earned an F from the Better Business Bureau, a grade usually reserved for scams or companies in legal trouble. 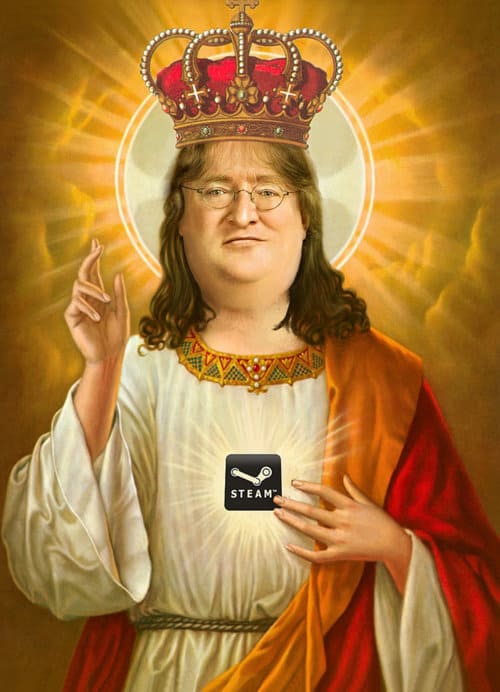 There’s long been a vocal minority of people that have disliked, distrusted, and downright avoided Valve’s sales platform, even back when it launched in 2003. It seems 2015 might have been their year to shine, as PR for the digital distribution giant has taken more then a few hits. The fact is, Valve and Steam are not great, and in the face of alternative stores like GOG or Humble, they’re not even the best in the PC world either. Steam has been coasting on the good graces of Valve’s legacy and the near constant sales for a long time and that (pardon the term) steam seems to have finally started to give out. People are tired of Steam and Valve and it’s hitting a boiling point.

Shutting off your servers in the middle of your biggest sale on a day when so many people are at home, and a lot of them might even being receiving gift cards to your service is bad. But that’s only the tip of this terrible iceberg. How about the wait time with Steam Support, which has been reported as anywhere from 24 hours to over a month. That’s assuming they actually understand what your ticket says and address your issue. Even Steam’s Support official twitter seems out of the loop, having not been updated (as of this writing) since May 15th. Valve have grown fat and lazy on Steam and haven’t made a new game in several years. Steam sales have grown stagnant and less exiting then they used to, and the whole thing just feels like we’re going through the motions.

The fact is PC gamers deserve better from Steam. Steam isn’t the most successful platform for any reason other than it’s consumer base, and its treatment of consumers has been atrocious. Steam refunds were certainly a good idea, but that’s something that’s been requested for 12 years. There’s still features missing like scheduling downloads, terrible search features, an unstable store-front, and some much needed quality control on what gets put up for sale. SteamOS may actually be worse for games then originally advertised, and the Steam Controller had to go through several revisions before getting to its current state, which many still say is worse then an Xbox or third party controller.

It’s time to stop giving Steam credit. It’s time to stop praising lord Gabe, and pretending that all other stores don’t live up. GOG is a fantastic and DRM free alternative, selling great older titles and a wide variety of indie games. Humble offers a variety of games, and has the added bonus of giving a percent of every sale to charity. EA has done wonders for stepping up Origin, and while its sales can’t hold a candle to Steam its store-front is clean and simple to use. The only service that is hands down worse then Steam is probably Uplay, with no options for refunds and a terrible selection of games.

Valve is willing to listen to it’s customer base. Be it by reversing paid mods, rebalancing one of their games, or adding features like refunds (albeit 12 years later). It’s time gamers started demanding better of Valve, and it’s time Valve started doing better. When it launched in 2003 Steam was the only store on the block, but nearly 13 years later that block has grown larger and the competition more attractive. Steam can be the best store, and they nail it with constant sales and good community involvement. But they need to step it up, and here’s hoping 2016 is the year they finally learn this.

And for god’s sake, release Half Life 3 already.