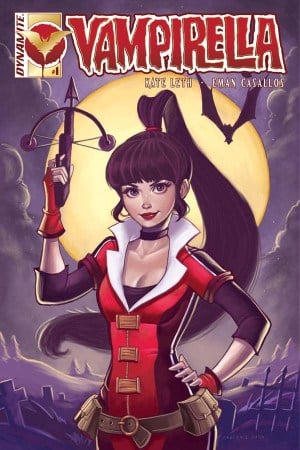 In Vampirella #1, writer Kate Leth (Hellcat, Bravest Warriors) and artist Eman Casallos (Masks 2) take the 47 year old horror icon and bring her into 2016 with its social media scrutiny and creepy online commenters while staying true to Vampirella’s campy horror roots. Along the way, there is some equal opportunity sexiness for Vampirella and her werewolf boy toy Tristan as well as an enchanting Goth atmosphere in Casallos’ settings and especially Valentina Pinto’s colors. The house that Vampirella, Tristan, and her trusty and sassy, if a little subservient butler Coleridge inhabit in Silverlake would make Guillermo del Toro  cry tears of happiness with its eerily lit windows and the play of blue and black around its eaves and roof. And the comic isn’t all pretty buildings and double entendres as Leth introduces an excellent foe for Vampirella in Slade, a casting director who has been active since the release of Universal’s Dracula in 1931, who can fight Vampi in the traditional monster of the week way or go after her reputation via social media and the Internet.

For years, Vampirella is a character primarily known as a sex symbol and for having a bit of a sci-fi twist on the typical vampire mythos. (She’s an alien from the planet Drakulon where the rivers flow with blood.) In Vampirella #1, Leth doesn’t deal with Vampirella’s origin just yet (Except for the cheeky caption “Not your 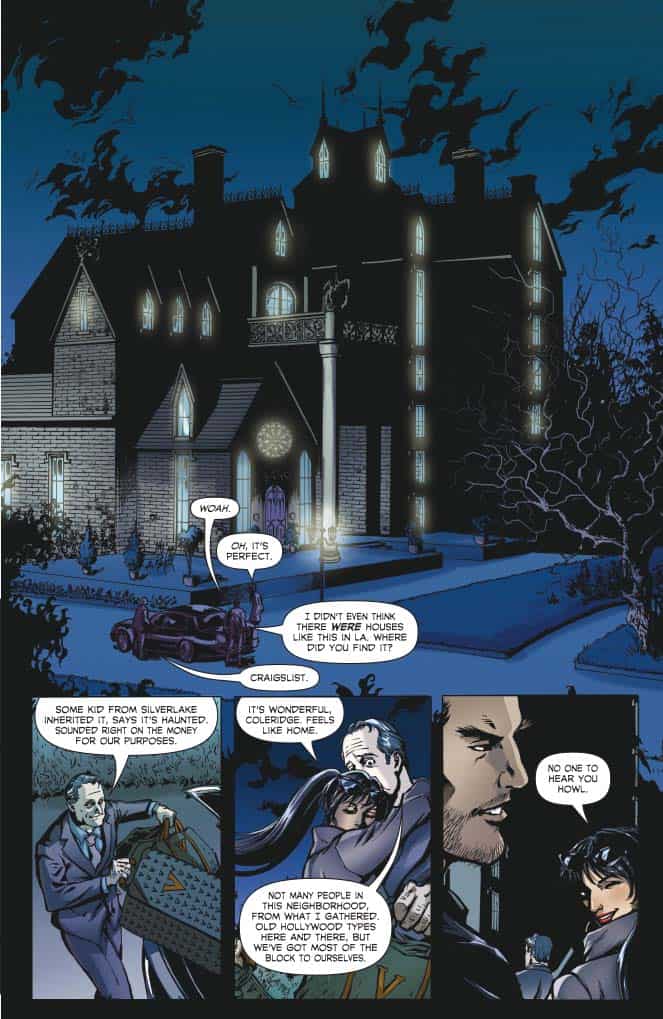 average vampire”) and chooses to dive right into the action. We don’t even find out why Vampirella is in Hollywood, but it is implied she has enemies from years of monster hunting. Focusing on the present is a smart storytelling decision because it gives readers a feel for Vampirella’s character (Funny, in control.) and methods (Ruthless.) instead of doing a boring exposition dump.

And Vampirella #1 is also a sexy comic, but Leth and Casallos ensure that Vampirella is in complete control of her sexuality and not just a pin-up for creepy guys to leer over. (She even pokes fun at skeevy Internet commenters.) This can definitely be seen in the playful manner they break out the original Vampirella costume before switching it out for the new Nicola Scott designed costume for her first “field mission” at a vampire bar. Vampirella wears the one-piece because she knows she looks great in it, and Tristan knows that too. There is none of the traditional sexual guilt that has been part of the vampire genre since Bram Stoker made  vampirism a metaphor for syphilis or even before when Samuel Taylor Coleridge wrote the poem “Christabel” about his fear of female sexuality (Or lesbians depending on which English major you ask.) , and Tristan and Vampirella’s relationship is just treated like two lovers flirting and having sex without any of those annoying labels. However, Casallos can do traditional horror as well as slab of lupine beefcake with his depiction of a slavering, feral werewolf later in the issue.

Kate Leth’s script for Vampirella #1 is witty and worldly combining quick hitting banter with Old and New Hollywood scheming. Slade might dress like a 1930s starlet, but her techniques for getting at Vampi  are very TMZ. Artist Eman Casallos cuts up the page with multiple panels and plenty of space between them to show Vampirella’s speed as she dispatches Slade’s goons, who interrupt her sexy time and singlehandedly brings vampire clubs out of cold storage. Colorist Valentine Pinto goes dark with her palette, but differentiates the steamy silhouettes of Vampi and Tristan rolling around in the sheets with the stark black and blue horror of the victim of the month in the comic’s opening.

Vampirella #1 is sexy, tongue-in-cheek, and a little scary and has a great hook as Vampirella must balance the more “normal” work of hunting monsters with her newfound “fame”. And her social media manager might be the breakout character of the issue.