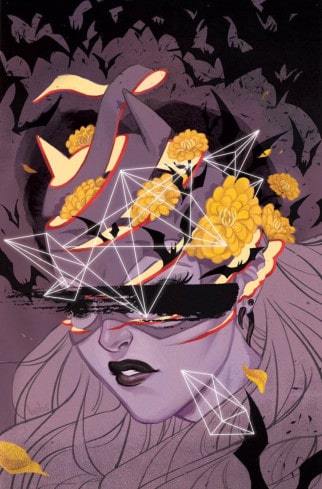 After Babs is knocked out by The Fugue, who is revealed to be her “friend” Greg, in the previous issue, her best friend and computer genius Frankie must fight through Babs’ mind to wake her up and get her back in the fight. Babs Tarr draws the framing narrative in her usual style with a touch of darkness and plenty of emotion while Horacio Domingues, Roger Robinson, Ming Doyle, and James Harvey all draw various dream states from a cafe to a suburban neighborhood to various scenes from her crime fighting career and nightmares of the past. Writers Cameron Stewart and Brenden Fletcher throw out some important developments on the table for the Batgirl title and the character of Barbara Gordon, and this issue definitely has a “part one of two” feel with Batgirl #50 hopefully unpacking some of the imagery and reveals.

Domingues and Robinson’s art styles are the most similar to Tarr’s so there is easy visual continuity there, but Doyle’s art style has a harder edge than the soft faces and eyes of Tarr’s figures and Harvey’s work is incredibly abstract and evocative of Winsor McCay’s groundbreaking turn of the century Little Nemo in Slumberland comic strip. (Harvey did draw a Little Nemo story for the Dream Another Dream anthology from Locust Moon.) However, these disparate styles gel thanks to the colors of Serge Lapointe. He is the Virgil to the reader’s Dante as he leads us through the hellscape of Babs’ AI-infected mind filled with false memories, disapproval from father figures, and the occasional suburban street. Lapointe makes Bab’ backup A.I. a little too bright even compared to the small town of Happy Harbor where Batgirl had a run-in with The Fugue in his former guise as a whistling bank robber and makes Batman’s cave a little too black when he tells Babs that she’s not trustworthy. His usual friendly blues and pinks that have peppered the title since Stewart and Tarr took over are a little harsher in her nightmares before relaxing to an uneasy status quo by the end of the title.

See also  Batman: Death of the Family is an Honour to Read 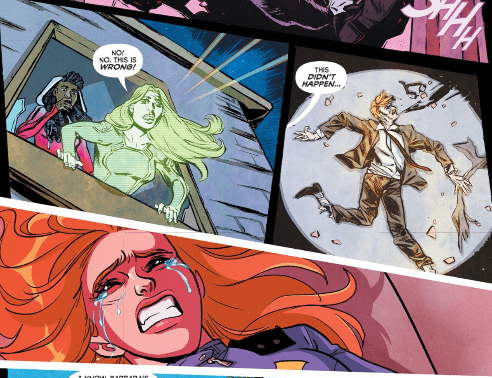 Even though her art style is the polar opposite of Babs Tarr, Ming Doyle is her equal in conveying powerful emotion through character’s faces and gestures in Batgirl #49. Her dream sequences shows Frankie watching Babs getting reprimanded by her father and Batman for taking up the mantle of Batgirl and then turns into a no holds barred battle against the Fugue ending in a horrific visual flourish involving Black Canary’s cry. Doyle’s art is filled with intense imagery, such as bats, Jim Gordon dying, rain on the rooftops, and some eye horror. Her sequence is a major low point for Babs as her legitimacy as a hero is tossed side by the two men she looks up to, and she also must live her greatest fear. There is a powerful cut from Doyle back to Tarr’s art as big tears are streaming the unconscious Babs’ face. This is a breaking point.

The Fugue is such a great villain (and we still don’t have the final word on him.) because he turns Babs’ greatest strength, her eidetic memory, into a mental and physical weapon. Her secrets and knowledge could be deadly in the wrong hands, and the Fugue somehow has the ability to hack and access them. But the fact that he’s a kind of brain or artificial intelligence hacker also makes him vulnerable to Frankie, who is the true hero of this issue, fighting tirelessly to bring her friend back to the land of the conscious. Her computer techniques may be a little difficult to follow, but Harvey and Doyle give readers some crowd pleasing art, involving punching, kicking, and deadly weapons, to show off her triumph while Fletcher and Stewart double down on showing the importance of her friendship with Babs to the series as a whole.

Throughout Cameron Stewart, Brenden Fletcher, and Babs Tarr’s run, Batgirl has proven that it is the visual crown jewel of DC Comics, and issue 49 is a victory lap, especially thanks to the powerful work of Ming Doyle and James Harvey along with the sunny, suburban Stepford horror of Roger Robinson. It is also a tour de force into the beautiful and damaged psyche of Barbara Gordon and a real turning point in her arc in the New 52. Issue 50 can’t come soon enough.