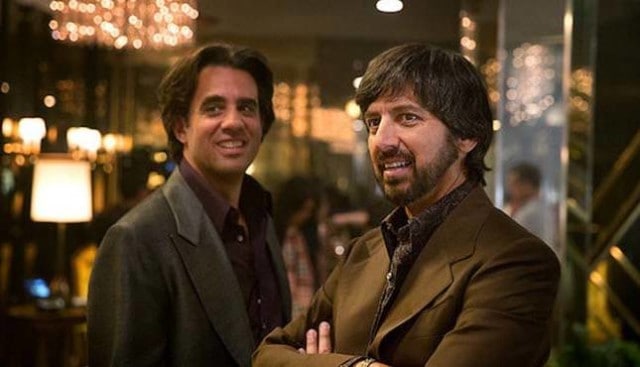 Vinyl, Season 1, Episode 7: “The King and I”
Written by David Matthews
Directed by Allen Coulter
Airs Sundays at 9pm on HBO

If Vinyl has managed to convey one thing about Richie’s personality, it’s that he never does anything halfway. He has to run his business with a constant pipeline of cocaine direct to his nose. When he has marital problems, he has to dive into a deep depression and go on a multi-day bender. And when he decides to try to pull his life back together, he throws out all the booze and gives up the drugs. And maybe there’s something to quitting cold turkey. Richie actually seemed confident and put together in “The King and I.” But Richie also exemplifies Freud’s death drive, and one way or another his current exploits will end in self-created destruction.

The recent round of layoffs at American Century weren’t enough to cut expenses, and the label won’t even be able to make payroll for the month. Richie’s solutions is to sell the label’s private plane. A label head in Los Angeles (played by The Sopranos’ John Ventimiglia) is willing to buy the jet, so Richie will fly it out there to sell. Zach also decides to accompany Richie, who isn’t well known for making responsible decisions. It’s a smart move by the writers, as Ray Romano has been consistently underused by this show. He’s an underrated actor whose bits of comedy add a necessary lightness to the show, but he’s also great at conveying the uncertainty and vulnerability of a man who just wants to support his wife and children.

After selling the plane, Richie and Zach schmooze at a party with Graham Nash and Stephen Stills, until they hear some gossip that Elvis is unhappy with his current label. Richie and Zach stop off in Las Vegas to see Elvis and try to set up a meeting with Colonel Parker (Gene Jones, in a role not too dissimilar from his cult leader in The Sacrament). Jones’ Colonel is a darkly comic character; in the lobby he smacks anyone who gets too close to him with his cane, but also shows a fierce, almost abusive control over Elvis. When they actually see him perform (played by Elvis impersonator Shawn Klush), he’s overweight and sweating. Zach is distressed by Elvis’ decay, but Richie see what Elvis was and could be again.

After the show, Zach and Richie bring some girls to the room, who Zach proceeds to undress, but Richie ducks out to visit Elvis. He wants to convince him to strip down his band and get back to his roots, leaving the schmaltz behind. And Elvis is receptive. But the Colonel returns, and suddenly Elvis turns into a scared child. When Richie comes back to the room, the money from selling the plane has been stolen and Zach is sleeping naked. It’s a reversal of fortunes, where Zach’s drunkenness has screwed them over, instead of Richie’s usual shenanigans. But a cruel flashback reveals that Richie actually took the money while Zach was having his three-way and lost it all gambling. They fly back to New York in coach, with Zach feeling indebted to Richie and the label. Richie decides to end his sobriety on the plane with a double vodka. And he’s back to where he once was.

The pacing of “The King and I” was more relaxed, especially compared to Richie’s psychotic binge in the previous episode. It took a lot of cues from the Mad Men episodes where Don would go to California. Don Draper’s California was a place where he could start over and try to be a new person. Richie isn’t as enamored of California as Don Draper was; he’s more attuned to the malaise consuming the people there, but he still respects its rejuvenating powers. California is just the place for a Richie that’s back on the wagon and trying to restart his stalling company.

Unfortunately, his hopes of redeeming himself are just a mirage, a city built on a desert that pretends it’s an oasis. I’m hoping that Vinyl isn’t trying to make this the main theme of the show, that Richie will screw up every good thing he has going for himself. A little self-destruction is interesting, but after a while it just becomes boring and tedious. Richie can sabotage himself when he’s stoned, and now he can do it while completely sober.