Gotham returns this week with Gordon at Blackgate Prison where he pays his penance for having killed Galavan by accepting his fate as a victim of a masterful setup that was orchestrated in “Mad Grey Dawn” by Ed Nygma. This outcome where Gordon was made to face the consequences of his actions put him at his all-time lowest where he had to give up hope. In “Prisoners” Gordon manages to regain his hope back but not before going through some more trials in tribulations.

“Prisoners” is a much focused episode that serves mainly to turn around Gordon’s trajectory from sinking down in despair to fighting back to an active role and he gets there slowly but surely in what begins to be a somewhat grounded circumstance but worms his way out through some almost absurd means. When Gordon begins the episode he is still holding on to the slightest bit of hope by believing that if he just keeps his head down and power through he could serve his time and find his way back to Lee and his unborn child, but slowly the episode begins to pick away at Gordon as he grows accustomed to his somber existence. The mundane day to day for Gordon is beautifully presented in the opening sequence where we see Ben McKenzie display Gordon’s routine with growing resignation with only glimmers of courage showing through as he reaches out to a photo of Lee.

The progression from bad to worse is done very well in the beginning when Warden Carlson Gray selects Gordon to be moved to a much more dangerous wing on behest of the former Commissioner Loeb, whom has had a vendetta against Gordon. The bleakness of Gordon’s situation hits its zenith when Bullocks visit and he informs him about Lee’s miscarriage; an unexpected twist that is quite impactful. Donal Logue really sells the sorrow in his delivery and expression. From here Gordon hits his lowest point and needs to find a catalyst to pull himself up. The prompt that pushes Gordon into not being a lost cause comes through another inmate who goes to bat for him when confronted by a group of agitated prisoners. Puck Davies, an inmate who had benefitted from Gordon’s takedown of the Red Hood gang, reminds him that he is a hero that is worthy of redemption and gives him the motivation to want to clear his name and then find his way back to Lee. Unfortunately, Gordon’s escape victory doesn’t come without an omen warning that maybe his hero status may be irrecoverable, as it may have symbolically died with Puck, who’s wounds that proved to be far too severe to make it out all the way home free. 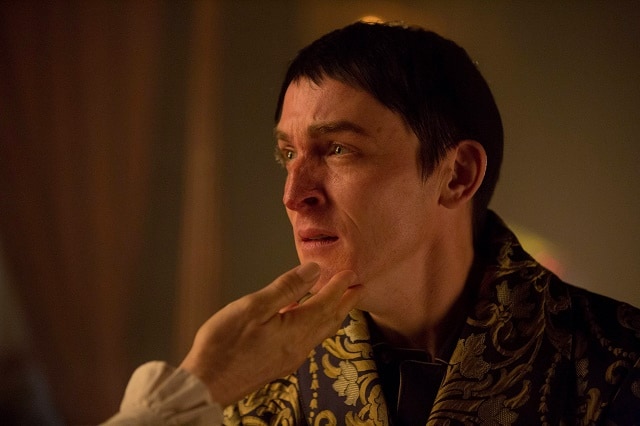 “Prisoners” is mostly evenly divided in its attention between Gordon’s journey and the Penguins situation. While Gordon is trying to find his way back into action, The Penguin is attempting to settle into his unusually improved situation. The Penguin, after losing his gangland king cred, his mother, and his violent tendencies, found himself with a new home and family, one of which may be at risk at being lost when his past finally does catch up with him. What’s most interesting about the Penguin’s story arc is how well Professor Hugo’s program worked on Penguin that he appears to be fully regretful for his past sins, where once he would’ve reveled in his misdeeds. Penguin’s relationship with his father is very strong and enjoyable to watch as Paul Reubens and Robin Lord Taylor permeates familial closeness. Reubens, in particularly is a standout performer with such a distinct character role.

The Penguin’s dilemma comes from the extended family, whom as it turn out are not blood related. Melinda Clarke portrays the matriarch, Grace, who perfectly portrays the proper upper class woman with a devious nature. Her two children Sasha and Charles are equally as fun with mischievous hearts that seem childish and self-important. The family dinner scene where they all talk about ghosts is a great moment in the episode and does well to feature the oddball dynamic of this family. These characters are opposed to Penguin because he poses a threat to their inheritance and the only outcome that could come from this, does happen when they accidentally end up killing the patriarch rather than the successor. What will come from this event? Will Penguin begin his path back to violence due to a desire of revenge? It will be interesting to see where they go from here. 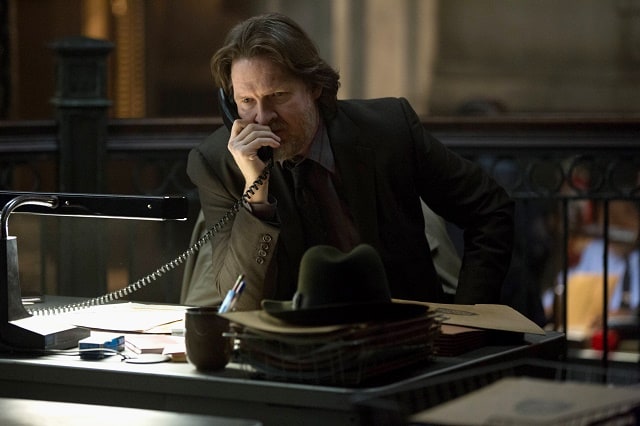 Case File: Get Gordon out of Blackgate Prison

One of the rare episodes where there is no true case file threat featured. Instead the main mission is to get Gordon out of his captivity and at the center of this task is Bullock, who we see doing his hardest to get things done in a timely fashion. Bullock’s search for an answer is a brief yet worthwhile endeavor as it brought back a character from season one to aid in the case. In what seemed like an unlikely return we get Carmine Falcone come to Bullock’s aid in a sequence that is incredibly well shot, with the bright lighting and the deep shadows that was all done in a long take. Although, there wasn’t much that John Doman was given to do, having him reemerge again is a treat in and of itself.

The actual escape plan is where the episode gets a little unhinged in credibility. Gordon is made to look as though he was stabbed and killed by an inmate and taken out of the prison via a body bag doesn’t entirely jibe as the best possible strategy to get him out of the prison and even less so when it is called out by Bullock who states “fake blood and a retractable knife, I can’t believe it worked!”, which only brings to mind that it really shouldn’t have worked. This would’ve have been as big of an issue if Gordon didn’t have to go back into the prison to help Puck escape. It’s not bad that Gordon wants to help Puck but to go back in when they already have the perfect “Gordon is dead” scenario so no one in the prison should be looking for him while he looks for Pinkney’s real killer to clear his name. Instead, there is Gordon going back into the prison to have a faceoff scene with Warden Grey, who sees Gordon is not dead. It’s just a bit silly as is although the ideas could’ve worked had it been better developed and executed.

“Prisoners” is credited as written by, Gotham “Pilot” director, Danny Cannon, who took on writing duties on season one episode “Red Hood”. Cannon’s script doesn’t take on too much by concentrating on only two main focal storylines, which are Gordon’s situation and the Penguin’s family. The pacing is done well, as it appears very deliberately drawn out with key plot points that will carry us into the next episode. The direction by Scott White is commendable in creating mood and setting atmosphere that is both visually stunning and compelling. One of the most interesting sequences in the episode is Penguin’s dream sequence that shows some visual flourishes.