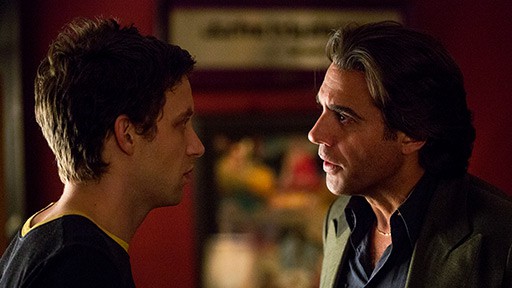 So far, a fairly reliable indicator of the strength of a Vinyl episode is how much humor it has. That’s not to say that the show needs to veer toward broad humor to be worthwhile, but the best episodes have had a lightness that makes them infectious. It gets boring after having to wallow in Richie’s problems week after week. Episode 8, “E.A.B.”, recaptures the balance between the darkness of Richie’s demons and the pure fun of rock music in the ’70s.

The episode gets off to a strong start as Richie, Zach, and Skip visit a loan officer that Zach knew from high school (Michael Kostroff, the slimy lawyer for Avon Barksdale in The Wire). Zach butters him up with a story about tuba shenanigans from high school marching band, but when it comes to the actual loan business, the officer denies their application. The funniest episodes of Vinyl also tend to have the best camera work and music editing. The slow motion as the group enters the bank, scored to “Here Comes the Sun,” perfectly captures their hopes and optimism. When the conversation goes south, an easy-listening version of the Midnight Cowboy score starts to play. It’s a sad and haunting melody, but the kitschy cover version makes the whole affair seem appropriately drab.

Later, Richie goes into the studio to watch the Nasty Bits record a half-baked “sea shanty.” The band is in a rut, out of inspiration and trying to craft something they think the label will like. Enter Lester. So far the show has underused Lester almost as much as its female characters. After a compelling introduction to his tortured history with Richie, the show has mostly turned him into set dressing. Here, Lester draws from his past as a musician and tries to explain to the Nasty Bits that most songs have similar backbones. He does a YouTube worthy demonstration of songs that all have an E-A-B progression. Afterward, he confesses to Kip that he originally took the job to screw over Richie, but finally understands what the band is trying to do. There’s a sorrow to Lester’s voice when he’s talking to Kip; memories of the career he could have had as a musician if his throat hadn’t been crushed by mobsters. 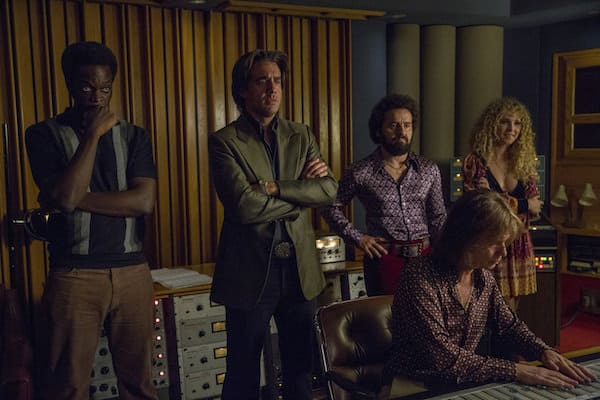 Back at the office, Andrea is fed up with all of Hal’s phallic logos for Alibi records, the label’s new imprint. Hal gets predictably sexist after her criticisms, so Andrea decides to fire him on the spot. Hal returns to the office later in the day and starts breaking gold records, then pulls out a pentagram and curses everyone in the office. It’s a delightfully unhinged performance from Jay Klaitz, and the Satanism bit was funny and unexpected. So far Andrea’s relationship to Richie has gone smoothly, but this incident exposes some cracks. Chances are their working relationship will take a few more hits in the last episodes of the season.

Richie ends the episode in a police station. He plays it cool, at least until the cops play a recording of Joe Corso and him admitting that they murdered Buck Rogers. Based on the pattern Vinyl has set, next week’s episode will be much darker and more dramatic – and if past is precedent, less interesting and successful. It’s not necessary to totally jettison the humor and stylistic flourishes in order to document Richie’s troubles. Maybe Vinyl will finally learn its lesson.