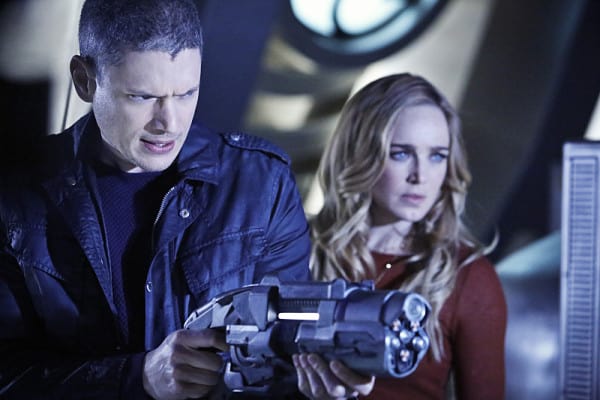 In its seventh episode, Legends of Tomorrow goes where the show should have gone in its second or third episode: into the “space” part of its space/time setting, and into Rip Hunter’s backstory. Rip is both the leader of the Legends, and one of the characters who gets the most screentime, yet his character has been, for the most part, bafflingly opaque. His family’s death, set up as the driving force of character, has been explained and referenced ad nauseum; yet, without any sense of his family as people, the initial emotional weight of this quickly faded. Human beings are fundamentally programmed to care more about familiar things than unfamiliar, which is why the love story of Rip and his wife is so vital to the story: it makes us care about both Rip and his pain.

Well, to a degree, at least. The episode opens on a shockingly heavy-handed note, with Rip replaying over and over a saccharine hologram of his wife and son. It’s an incredibly weak way to launch things, since at this point we just, don’t, care. (Rip’s family tragedy has become almost as annoying as Kendra’s “I used to be a barista!”) Fortunately, the episode goes on to rectify that, as Rip’s love story, and the sacrifice his then-not-yet-wife makes for him,  is skillfully interwoven as flashbacks throughout the first half of the episode. It’s a long overdue development of the character, and while it can’t make up for what I’ve come to see as the fundamental miscasting of Arthur Darvill as Rip, it certainly helps give Rip some depth.

The episode also finally utilizes space, the final frontier (apologies for the constant Trek references). The plotlines in this epsiode are relatively simple in that there’s a small cast of extraneous characters/villains and it’s all set in one place instead of jumping around multiple locales. Each plotline, however, in contrast to many previous episodes, is equally weighted as far as stakes and screentime, which is why the episode feels complex. All the characters – the entire team – are put in danger, but varying kinds of danger, which test their various mettles. Leonard and Sara are locked up together, slowly freezing to death, which allow for some bonding between them, and an incredibly important piece of information about Leonard and Mick’s relationship (their origin story, if you will). The fact that they first became a team when Mick took Leonard under his protective wing in juvenile detention adds layers of history and years of loyalty between the two.

Meanwhile, Rip, Jax, and Mick are locked up in the brig of a pirate ship, setting in motion an open and vicious rift between Rip and Mick, in which the latter disavows any remaining loyalty or submission to the former. It’s up to Professor Stein, a storyline that would have been improved without the hopelessly cheesy references to his childhood Space Ranger dream, to rescue them – from the brig, though not from themselves.

Kendra and Ray work desperately to free Leonard and Sara before they die, and props to Legends of Tomorrow for taking the two characters who really, really didn’t work, and giving them a dynamic that redeems both. It makes no sense at all that Sara, Leonard in tow, would have been the one to run off to repair the hole in the ship – Kendra’as the one with a welding background and some mechanical experience – but it pairs up Kendra and Ray for a high-stakes, very endearing romantic exchange. Kendra’s desperation when Ray nearly dies, Ray’s witty, respectful response later as he tells her she doesn’t need him, and the sudden but satisfying kiss, are beautifully done. This dynamic, gradually built over several episodes, shored up by consistent character portrayals, and featuring funny, specific dialogue, is the exact kind of writing and character interactions Legends desperately needs, and I hope it continues.

All of this, however, is secondary to the main motif of the episode, which is the divide between Leonard and Mick on one hand, and the entire Legends team and Mick on the other. There is something satisfying about seeing Mick, a thoroughly “bad” character, live up to the ruthless violence so often promised and hinted at by his actions and words. The staging of his betrayal, and his fight scenes with Sara and Leonard, are excellently done – the raw physicality of the hand-to-hand combat is easily one of the series’ most consistent strengths. It was also a bold move to pair him up with the best fighter on the ship, and it was such a relief to see they didn’t refrain from that simply because Sara is a woman. She’s also the only one on the ship besides Ray that Mick has bonded with to any degree, so that tension underlies the scene. 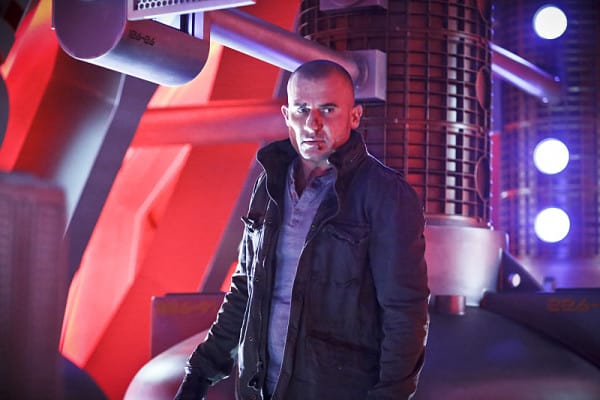 The villains are still somewhat unimpressive (Capt. Valler is the best villain in the show so far, but he’s too-easily bested by Rip) and the Time Masters dull (Captain Baxter is essentially unnecessary to the plot). The team storylines all work however, making for an unusually cohesive and strong episode. “Marooned” ends on a major cliffhanger, though I believe the answer to the cliffhanger is in the episode title – there’s no way that Leonard killed Mick. I’m calling it right now: Leonard having knocked him out, or something intervening, and the team simply marooning Mick wherever the barren place is shown in the final scene. Nevertheless, it’s an explosive way to go out, with bitterness and challenge rife in the air between the two old friends and partners, and then Captain Cold lifting his freeze gun and emitting a blast of deadly ice and cold right before the screen goes to black.

The best possible outcome is that Mick is genuinely marooned, but returns as a villain/sometimes-ally of the team in some future episodes. I’ve been saying since the show began that it has too many characters, and ideally, this is an assertive creative decision to cut down on one (even if Mick wouldn’t necessarily have been my first choice for that one). Look out for the next episode, and we’ll see if Legends can maintain a streak of two strong episodes in a row (something that has yet to happen since the two-hour pilot).

I’m still into Sara and Leonard as a pairing, and this episode teased that without offering any hint of actually delivering on it. Sigh. Such chemistry should not go to waste. #CaptainCanary

This episode had very little banter, so I”m going with my least instead of most favorite line –

“Love is beautiful and powerful and once you know it, it changes everything.”