Home
Entertainment
Heavy Metal Horror
Prev Article Next Article
Body Count: Volume 10
.
I’m not sure how the heavy metal and horror movie connection started but it’s a match made in hell. The two go together like chocolate and peanut butter. It’s a natural pairing. Alice Cooper had been combining Grand Guignol stage theatrics with live music since the 70’s. Blue Oyster Cult wound horror and science fictions themes into their lyrics. Black Sabbath took their name from a Mario Bava movie yet the movies and the music maintained a safe distance from one another until heavy metal became the undisputed king of album sales in the mid to late 80’s. The two seemed to officially become bed mates in 1986 with Friday the 13th Part 6 when the very same and this time very crazy Alice Cooper provided the synth happy track “He’s back! (The Man Behind The Mask)” to the soundtrack. Before you knew it, Dokken was writing the theme song to my favorite entry in the Nightmare On Elm Street Series, Dream Warriors and Megadeth covered, again, Alice Cooper for the Shocker soundtrack. Fueled by Satanic Panic in the 80’s, the PMRC and a growing movement of conservative christian parent advocacy groups, metal bands were being branded as the latest pop cultural economy to warp the mind’s of teenagers. So were horror movies. Ozzy Osbourne and Judas Priest were both brought to trial when their albums were found on the turntable at suicide scenes where moron metalheads had killed themselves. Young murderers’ belongings were searched by the police wherein not only were there AC/DC records in their collections but so were dozens of video tapes compiling the greatest horror movies ever made.
And you know what that means.
It was a natural combination for producers of exploitative horror movies. Make the villain in your movie a heavy metal band, or make it Satan with a heavy metal band that worships him. Add tits and blood and license a dozen songs by b-list heavy metal acts and you have the makings to cash in on a popular trend of teenage tragedy and outrageous music. From Alice to Gwar to Lordi, there’s no shortage of source material. I’ve always had a soft spot for these very, very bad movies because I grew up on this stuff. Not only did I love horror movies, I also loved metal and still do. So much in fact that our upcoming season for our local guerilla drive-in, I have booked one of my personal favorites, Black Roses. More on that later but right now, here are a few laughworthy titles that use heavy metal as their central mechanic. 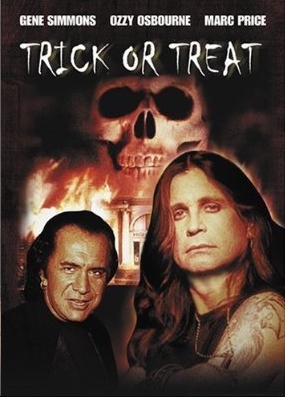 Trick Or Treat, 1986
Dir. Charles Martin Smith
I’m sure they meant well with this one but everything about it just so wrong. I used to hear ads for it very late at night during syndicated radio broadcasts and they gave their cameo actors top billing over the regular cast. This is because these cameos included Ozzy as an outspoken anti-metal televangelist and Gene Simmons as a radio DJ named Nuke. Directed by Charles Martin Smith who played Terry Fields in George Lucas’ American Grafitti, Trick Or Treat tells of Eddie, nerdy metalhead played by Marc Price from TV’s Family Ties. When metal icon Sammi Curr dies in a fire, Eddie winds up in the possession of the only copy of Sammi’s last demo, which gives him the power to get back at the bullies who fuck with him, but when Eddie realizes that he’s just a pawn he tries to get out of the game but has to deal with a resurrected and supernaturally powered Sammi Curr. It comes off a little like Carrie at times but has none of the style or theory of Brian De Palma, this is mostly just a laughable piece of shit full of godawful acting and a hilarious premise. 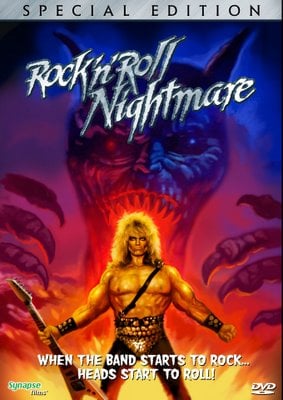 Rock n’ Roll Nightmare, 1987
Dir. John Fasano
Trick Or Treat may have been awful but it has nothing on Rock n’ Roll Nightmare. It’s one of those movies that, as the credits roll, you wonder just what they were thinking when they made the movie. Did they think they had a good idea? Director, Fasano, would make one more metal movie after this one but for the time being, understand that it’s a vehicle for rocker Jon Mikl Thor. Thor, a Canadian bodybuilder and singer at one time headed up a band called Thor & The Ass Boys and that’s about all you need to know about that. In truth, his band Thor still plays to this day but put that aside. Rock n’ Roll Nightmare is a nonsensical movie to behold. Thor plays the leader of a cock rock band that retreats to a farm house in the middle of nowhere to record their next album but monsters run wild and it turns out that Thor is actually a leather speedo wearing angel named The Intercessor, who went out there to lure out the devil, a man sized rubbery piece of crap. The two do battle, if you can believe that, as production assistants push the rubber devil around and throw stuff at Thor. Thor, on the other hand, makes silly faces and slaps the rubber devil around while a song plays in the background about rising to the occasion. It’s seriously fucking insane. I don’t know what they thought there were doing. 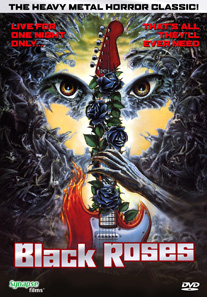 Black Roses, 1988
Dir. John Fasano
Fasano followed up Rock n’ Roll Nightmare with something  a little more lucid but just as silly. Black Roses had a bigger budget and doesn’t seem like a vanity project for one of its actors. Black Roses is about a demonic heavy metal band that moves into a small town to rehearse for their upcoming tour but their evil influence bring the town’s kids under their thrall. Antisocial behavior ensues and the only person who can put a stop to Black Roses is a dedicated school teacher who seems to be the only adult in town who realizes what is going on. The script is better and the acting matches it but that’s not really saying much. The theme song, Me Against The World is played several times throughout and is performed by marginally important band Lizzy Borden who are almost as ridiculous as the movie. The rest of the soundtrack, though, is provided by King Kobra, another minor band that even among a genre of music that couldn’t fail at the time, managed to go unnoticed for the most part. They also provided a track to Iron Eagle. King Kobra frontman, Mark Free, would eventually undergo a sex change in the mid-90’s and now sells real estate in Florida under the name Marcie Free. I wish I were making that up. The drummer for Black Roses is legendary metal drummer, Carmine Appice, who played with Ozzy and Vanilla Fudge, among a shitload of other bands. At the time of this production, Appice had formed King Kobra, who were just about to call it quits as a band. The movie did nothing for the band and does nothing as a horror movie, but as a so-bad-its-good artifact, it can’t be beat. It’s full of ridiculous music and hammy acting. 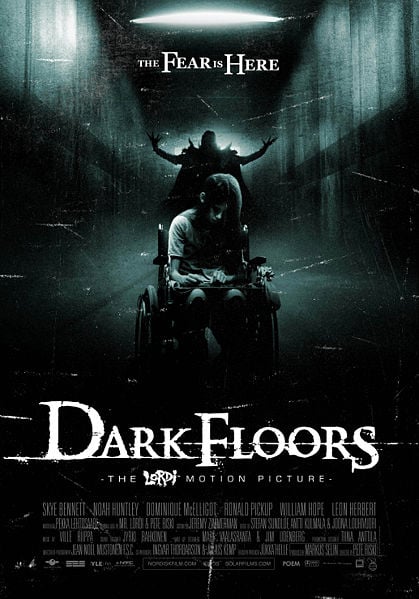 Dark Floors, 2008
Dir. Pete Riski
The 90’s wasn’t kind to heavy metal. Nor was horror all that prolific during that time but metal came back with a bang in the new millennium and leading the horror metal pack is Lordi, the spiritual successor to Gwar. A Finnish band, Lordi wears the makeup and sings about monsters but where Gwar seems like a sophomoric, scatalogical high school art project formed in some teenager’s basement, Lordi comes off like a budgeted horror movie. The video for their song Blood Red Sandman pays tribute to Evil Dead in a big way. It was only natural that they make their way to feature films. The story for Dark Floors doesn’t make a whole lot of sense as time stands still in a hospital and only a father and his autistic daughter, joined by a gallery of horror movie victims-to-be, are left in the hospital as they’re stalked through the halls by members of Lordi. It shines with a few good ideas every now and then but is mostly a vanity project to promote the band. The ending makes absolutely no sense but the makeup is good. The most unfortunate part is that the best thing about the movie is the new Lordi song that plays during the credits.
So metal and horror don’t exactly go together as well as producers had hoped they would. The results are often hilarious and not particularly scary. It’s often crystal clear that the producers don’t know much about horror or heavy metal but at least they tried. What they left us with are some of the worst movies ever made but in such a great beer and pizza way.