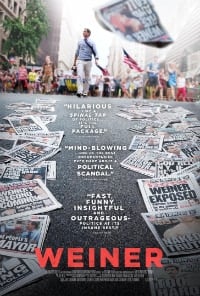 Anthony Weiner was a U.S. congressional representative and rising star in the Democratic Party before a 2011 sex scandal derailed his career. Two years later, in an attempt to resurrect his political career, Weiner ran for the office of New York City mayor. A second scandal popped up during the campaign, putting a halt to Weiner’s phoenix-like rise from the political ashes. Fortunately for fans of tragic cinema, Weiner’s co-directors, Josh Kriegman and Elyse Steinberg, documented the entire event.

The film follows Weiner through his day-to-day life as he manages his political team, two-steps with the New York Media, and spends time at home with his family. The result is a highly enjoyable up close look at the nature of fame, our capacity for forgiveness, and Weiner’s questionable decision making.

Over the course of the movie, the filmmakers rarely choose to address Weiner from behind the camera. The documentary isn’t edited together to take a pro/anti Weiner stance, either. Instead, Kriegman and Steinberg choose a fly on the wall approach, they simply point the camera and shoot. In addition to capturing footage of Weiner at work and at home, the filmmakers stitch the movie together with his public appearances and media footage. The documentary does an exceptional job of presenting the audience with the numerous facets of Weiner’s chaotic lifestyle.

You don’t have to follow politics to enjoy this film, although those that do will get an additional kick out of its insights into the infamous politician’s life. Weiner’s second sex scandal takes a soul-crushing toll on he and his family, and the filmmakers swoop in for an uncomfortable close-up as his political aspirations begin to wilt. Weiner’s strong will, ambition, and resolve in the face of adversity are why he makes an exceptional politician, but these same qualities also continue to fuel his campaign in the face of defeat. The film provides the audience with an unflinching (at times painfully uncomfortable) look at Weiner, whether he’s calculating a defense or going home a tangled mess of mental exhaustion and regret.

Between our social media feeds and the 24/7 news cycle, it’s impossible to keep up with the deluge of information life throws at us. The irony here is that as people are privy to more information than ever, it becomes difficult to posses more than a shallow understanding of most topics. This superficial public awareness can be both a blessing and a curse for a figure in the public eye. Anthony Weiner’s face is more recognizable than George Washington’s when he was elected president in 1789. Unfortunately for Weiner, his recognizable visage is associated with a regrettable act. The media defines post-scandal Weiner by his indiscretions, not his years of exceptional work as a politician. Kriegman and Stenberg do an excellent job highlighting the shades of grey in Weiner’s story — a story the media paints as black and white. 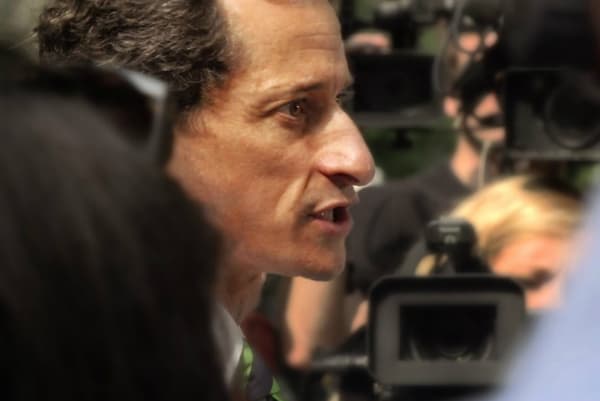 The documentary depicts Weiner as a three-dimensional man and allows him to flaunt his best qualities (he’s whip smart, charming, and hardworking). The film doesn’t hesitate to show Weiner’s faults either; he’s volatile, easily enticed into confrontation, and possibly a narcissist — the film opens with a post-crisis Weiner wondering why he’s letting himself be filmed (the answer is because he clearly enjoys the attention).

As Weiner’s second sex scandal rears its head, the filmmakers are there to record his 180-degree turn on his road to redemption. While the viewer has come to know Weiner as a multifaceted man, the film juxtaposes this knowledge against the media lynch-mob. In Weiner, the media comes off as a pack of headline-chasing bloodsuckers. One of the main drawbacks the film‘s hands off approach to narrative is that it doesn’t dive into outrage culture’s role in grinding the American political system to a standstill.

The most compelling aspect of the film is the relationship between Weiner and his wife, Huma. Huma is a political A-lister in her own right (she’s Hilary Clinton’s right hand woman). Watching Huma navigate through the wake of her husband’s controversies while also managing her own brand is a sight to behold. As the film progresses, Huma goes from sticking to her man’s side to opting out of his personal appearances (stoking Weiner’s flames of passive aggressiveness).

Late in the film, Weiner’s meltdown during an appearance on the Lawrence O’Donnell leaves Huma looking horrified. Weiner tries to convince his wife (and himself) that the incident wasn’t so bad, before she leaves the room. Weiner re-watches the incident on the screen in front of him and slumps down into his chair muttering to the camera, “Whatever the opposite of that is, is what Huma is.” These small honest moments show us that Anthony and Huma’s relationship is deeper and more complex than the sensationalist media leads their audience to believe.

Weiner is a clear example of life being stranger than fiction. Had the events in this documentary occurred in a movie or a book we would have deemed them too far-fetched. The stars had to align in an extremely precise way for the universe to will this film into existence. Wiener is a candid, engaging, and often humorous look at a man who’s repeatedly ensnared by his past indiscretions. While the documentary’s hands-off approach leaves some areas worth exploring on the table, what’s in the film works like gangbusters. Whether you’re a documentary lover, political junkie, or just appreciate really good movies, go out of your way to see Weiner.