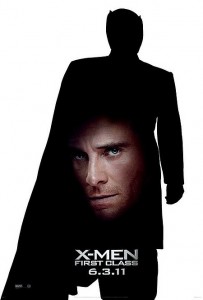 Bryan Singer’s X-Men (2000) was arguably the moment where comic book movies grew up and is largely responsible for the endless slew of adaptations that siege our multiplexes year after year. Certainly his 2003 follow up X2: Mutants United showed a level of maturity and austere charm that the genre is rarely afforded and is hailed to this day by most sane people as possibly the finest graphic novel film of all time. It’s a shame, then, that Singer handed the reigns over to the amicable but far less talented Brett Ratner (Red Dragon, Rush Hour) for the finale The Last Stand, which turned out to be a fun but ultimately muddled and unsatisfying end to a stellar series.

Five years later and Singer is back. Some may lament him being reduced to producer detail but it’s a blessing in disguise, allowing him to maintain an eye on proceedings whilst letting someone else stamp their identity onto the series. So Matthew Vaughn steps into directing duties hot off the heels of last years critical favourite Kick-Ass. It’s a bold decision and one which doesn’t disappoint with some stylish cinematic moments and surprisingly edgy, brutal and curt flashes of violence, language, and verve. There’s also a level of kitsch humour here thanks to its period setting (the 60’s) which manages to balance out the more sombre tone of the proceedings nicely. But make no mistake – this is still very much Singer’s world and it’s due to this consistency and maturity that it works so well and subsequently fits into the canon with such satisfying coherency.

But is it any good? Well to cut to the chase – it’s really rather sensational. Being a massive comic book fan myself I make a point to watch every adaptation going, but I must 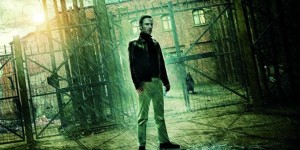 admit that my enthusiasm has been waning over the past few years due to the copy-and-paste functionality and general action-orientated-crescendo structure that they have evolved into. It doesn’t help that we are inundated with releases; just the past month alone has dropped Thor and Priest into our cinemas, with Green Lantern, Captain America, and Cowboys and Aliens all impending. It’s a crowded genre, and First Class comes as a hugely welcome breath of fresh air amidst the stale, generic fodder. Most of this comes down to the writing. Penned by Ashley Miller and Zack Stentz (Fringe) as well as Jane Goldman (Kick-Ass) and Matthew Vaughn himself, it has a patient, unravelling, organic nature to it that far outclasses its peers. Honestly, it feels more akin to a drama with some adventure elements than an action movie and for a genuine fan of the comics like myself that feels like a very welcome hug.

Because the greatest X-Men comics (and indeed, most super-hero comics for that matter) are introspective day-in-the-life dramas and none more so than the complex, almost 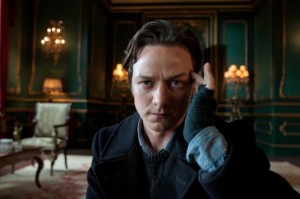 soap opera family dynamic of the sprawling X-Men universe. Interestingly Vaughn and Singer choose to not follow in the First Class comics roots (which began with Xavier already wheelchair bound and focused on the original crew of Cyclops, Jean Grey, Angel and others) but to pick an unusually low-key crew of mutants to fill out their roster. Beast returns (played beautifully by About a Boys’ Nicholas Hoult) as does a young Mystique. But newcomers include Banshee, Havok, Darwin, Angel Salvadore and Emma Frost, Azazel and Riptide. Chances are you won’t have heard of any of them and it was a big gamble not to throw in the familiar and (let’s face it) better designed usual suspects (though fans will no doubt be pleased to see Emma Frost in a proper role after her small cameo in Wolverine). But it works due to amiable acting, charming writing and the fact that it allows the X-Men themselves to play out around the main focus of the film, which was always to be the burgeoning friendship and eventual dividing of Erik Lehnsherr (Magneto) and Charles Xavier. 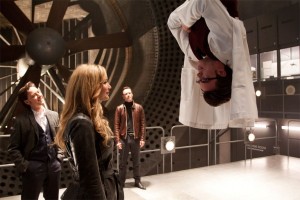 Once planned as an X-Men Origins : Magneto film, we are shown a large portion of Erik’s childhood at the concentration camps (Vaughn bravely opens the movie with a shot-by-shot recreation of Singers’ original X-Men opening) and then spend much of the movie flitting between his early rogue days, hunting down the nazi Sebastien Shaw (played with a little too much relish by Kevin Bacon) who killed his mother and instigated the full extent of his powers, and the frivolous, fun-loving, wealthy lifestyle of Charles. Relishing the 60’s era setting with stylish wardrobes, an appropriate visit to sexy fan-favorite society Hellfire Club, and suitably ‘groovy’ lines of dialogue, First Class manages to perfectly balance drama with humour and occasional spurts of action with a maturity that, to be honest, hasn’t been seen in a movie like this since X2.

There’s actually very little action in this film up until the engrossing and explosive, but still refined and restrained finale. Some may be put off by this, but instead the movie is 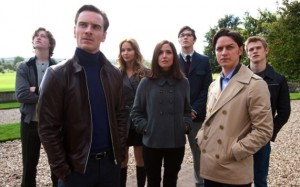 It’s not perfect. There are a few f/x shots (particularly the flying ones) that don’t convince, a couple of necessarily cheesy comments to nudge along staple plot points (instigating costumes, Xavier going bald, coming up with the name X-Men), and the editing is occasionally choppy. But these are miniscule moments in a film rife with magical ones. Not least of which are a couple of grin-inducing cameos that I won’t spoil here, but give real weight to the movie fitting into the rest of the series.

Ultimately this is a far better film than Wolverine, The Last Stand or the first X-Men film and it stands up to X2 with it’s own style and presence as one of the finest examples of how a comic book movie can keep it’s integrity when coming to the big screen. It certainly blows away every other standard superhero film of the past half a decade or so.

It is also, incidentally, the only superhero movie that I’ve ever shed a tear to. So that’s got to be worth something.