One of the great things about the genres of science fiction, fantasy, and horror are that they allow writers to break the rules. If a topic is taboo or controversial, put it on a distant planet and it’ll usually get past the censors. If a character needs to confront their issues over a friend’s death, bring the loved one back as a ghost and all of a sudden an internal monologue can be a dialogue. Genre settings allow writers to explore What If and Wouldn’t It Be Nice in a way that more traditional ones just can’t, not to mention that a lot of the times, they’re just plain fun. Certain topics or tropes pop up frequently in genre fiction, and television is no exception. Below are ten such tropes along with examples of TV shows that used them in particularly effective or surprising ways. 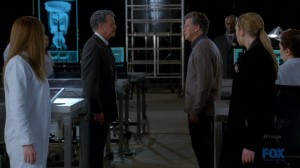 Many shows have achieved success with occasional trips to a bizarro or mirror universe, but Fringe took the idea to a whole new level, spending equal time in both worlds and allowing the audience to see both sides as alternatively aggressors and victims. The series has grown tremendously with the addition of the second universe, allowing most of the actors to play doppelgangers of their original characters and to explore just what makes them who they are. Other series to memorably address alternate realities are Star Trek and Sliders. 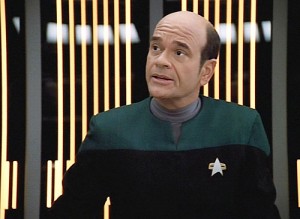 Most of the Star Treks series have at least one character who fills the role of the questioning outsider studying humanity. In the original series, it’s Spock; in Next Gen, it’s Data. In Voyager, that character is the Doctor, played wonderfully by Robert Picardo. The Doctor is an EMH, or emergency medical hologram, intended to be called upon only in emergencies to assist and then be switched back off. When Voyager gets flung into far space, he’s permanently switched on and begins to develop sentience and personality. He becomes an integral member of the crew, but his status as essentially a computer program is never forgotten, and as the series continues it explores his existence and the definition of a soul. Other fun takes on artificial intelligence include Al and Ziggy from Quantum Leap and SARAH, the smart house, from Eureka. 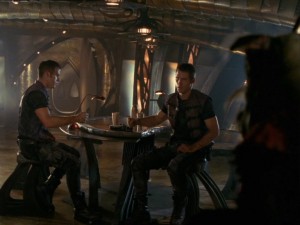 Farscape is a series that revels in tropes. At least one interesting example of each of those listed here pops up at some point in the series. Perhaps the most memorable is their take on the Evil Twin or Clone. It starts off as a one-and-done, with multiple members of the crew getting twinned, a process that results in two twins of the original person, both equally real or authentic. However, at the end of the episode, unlike what happens on most shows, the main character’s twin is still around. Events force the crew to split up, with one Crichton in each group, and the rest of the season is split between the two storylines. When they eventually merge back together, several of the characters are profoundly affected by their experiences with one or the other of the Crichtons. Other excellent examples of Evil Twins include Dr. Venture and his twin on The Venture Bros. and a character-whose-name-is-withheld-for-spoiler-reasons on Alias.

I’m Not Dead Yet 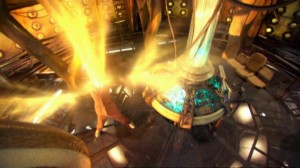 Genre fiction is chock full of protagonists who just won’t die (or stay dead). What sets Doctor Who above the pack is its twist on it. The Doctor does die, but then he is reborn in a completely new body while retaining all of the memories of the previous incarnations. It adds a fascinating element to the series, the question of who a person is. Are we our memories or our DNA? After enduring incredible trauma (or, in the Doctor’s case, death), can we ever be the same? Or do we lose that person we were before, becoming a new permutation based on the sum of our experiences and some flukes of chance. The Doctor has been a fixture of genre TV for decades, but this twist on the unkillable hero has kept him fresh and interesting, allowing character and series reboots when necessary. Other entertaining characters who refuse to stay dead are Captain Jack from Doctor Who and Torchwood and Buffy from Buffy the Vampire Slayer.

It Was All a Dream

Example: Star Trek: The Next Generation 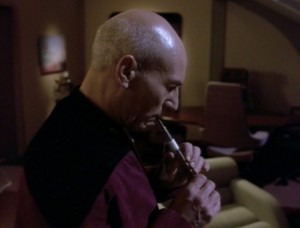 Many shows use this one to get out of plotlines they’ve written themselves into a corner with. Others use it for shock value, the most famous example being the finale of St. Elsewhere. The shows that excel with it are those that use it to explore their characters. An example that falls strongly in this category is TNG’s, “The Inner Light”. In this episode, Captain Picard, in a phenomenal performance from Patrick Stewart, lives an entire life as a member of an alien civilization, eventually accepting that his identity as the captain of a spaceship was nothing more than a delusion brought on by illness. He starts a family with his wife and carves and learns to play a flute. Years later, after growing old, having children and grandchildren **SPOILER ALERT** it is revealed to him that this civilization knew it was doomed and, when they could find no way to save themselves, sent out a probe to hopefully be intercepted one day, so that someone could pass on the memories and experiences of their people. Picard wakes back up on the Enterprise and his second in command hands him a box found inside the probe. Picard opens it and finds his flute, which he is now able to play. This would make for a fantastic standalone episode, but what puts it on this list is the fact that that flute sits in Picard’s ready room for the remainder of the series. He is seen either looking at or holding it several times over the remaining years, as well as in the films, and the character growth from this episode is never forgotten. Other fun and twisty dream episodes are The Dick van Dyke Show’s “It May Look Like a Walnut” and basically all of Twin Peaks. 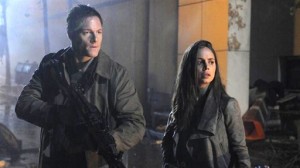 It’s one thing to set a series in a dystopic future. It’s quite another to show the baby steps that bring this future about. This is exactly what audiences get with Dollhouse. After a first season of mostly stand-alone episodes, it is revealed that the season has not been leading to a showdown with the mysterious villain Alpha, as originally implied, but has instead been leading to the apocalypse. The season one finale flashes forward ten years and shows the effects of the seemingly inconsequential choices made in the course of the season. In the second season, the show returns to the present day and audiences watch with a new sense of dread and foreboding, waiting to see just how it would play out. Dollhouse has its flaws, but this approach to the post-apocalypse trope is one rarely attempted. Other series to examine this setting are The Walking Dead and several fantastic episodes of The Twilight Zone. 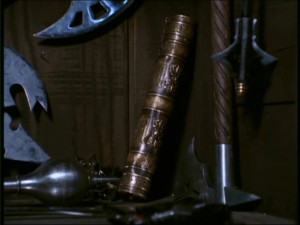 Prophesies are a convenient way to add dramatic irony to a series. Throw one in and, usually, watch while the characters’ attempts to thwart it end up causing it. Angel had several significant prophesies come up over the course of its run, to strong dramatic effect, but it’s the subversion of this idea in its final season that puts it on this list. **SPOILER ALERT** In the fifth season of the series it’s revealed that the prophesy that has essentially been driving the show may not actually be about the main character at all and could very easily be about a side character who has recently joined the team. The question is never resolved, but this realization has a profound impact on the protagonist and the reverberations of it are felt through the rest of the series.  Other series to explore the tricky waters of prophesy are Babylon 5 and Star Trek: Deep Space Nine. 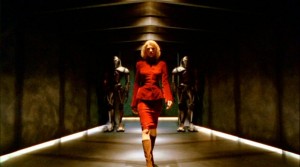 Yes, it’s an obvious choice. Sometimes, though, the obvious choice is obvious for a reason. BSG uses robots in pretty much every role. They are tools, sentient beings vehement in their belief in their possession of souls, and walking death machines. The Cylons have intricate political, technological, and cultural systems that span from the most simplistic toasters to the semi-conscious hybrids to the nearly human skinjobs. Each of these elements of the Cylon world are examined and toyed with and equally interesting is the look at a human population terrified of technology and the results of their attempts to create intelligence. Yes, the dark and twisty world of BSG is fun, but for a more light and entertaining take on robots, check out either Futurama or Red Dwarf. 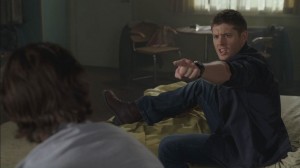 Though Groundhog Day may have popularized it, the idea of the time loop has been a staple of genre fiction since at least 1941, and probably much earlier than that. They’re an easy and fun way to mine some humor or drama from a situation or to examine a character. Supernatural is another series that loves its genre tropes and almost always knocks them out of the park. Their time loop episode, “Mystery Spot”, is noteworthy not only for its humor and enjoyable meta element (Dean references Groundhog Day each time Sam tries to explain what he’s experiencing), but because, unlike most series, the character who experiences the loop remembers it and is strongly affected by his experience. The lesson the loop is intended to teach him is an important one and one that he needs to learn, and this provides a strong undercurrent to the character’s actions over the rest of the season. Other series to do the time loop particularly memorably are Stargate SG-1 and The X-Files. 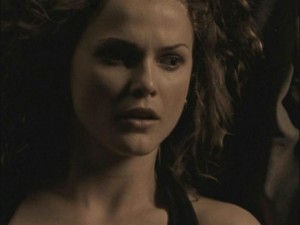 When Felicity was given a five episode extension late into its final season, JJ Abrams and crew decided, rather than unravel all the loose ends they’d been tying up, they’d go a different way with it. **SPOILER ALERT** Felicity, unhappy in her relationship, spills to her roommate who does a spell that, unlike any of her previous ones, actually works. It sends Felicity back in time to the start of the season, where she changes one decision and experiences the fallout. For the rest of the season, Felicity stays in this alternate timeline and experiences the butterfly effect first hand. At the end of the season, she comes back from Oz, waking up from a fever dream, but slight changes from the original timeline show the viewer that some part of Felicity’s trip must have happened. The reason that this example makes the list is because this show, which was always rooted in (an admittedly heightened) reality, took a hard left into sci-fi and became a study of free will vs. fate. Time travel is almost expected on genre series. Time travel in a soapy college romance is far more surprising. Two excellent shows that are based around time travel and may be of far greater interest to the genre fans out there are LOST and Journeyman.

What are your favorite examples? Which tropes should I cover when I inevitably do a part two? Post your thoughts below.