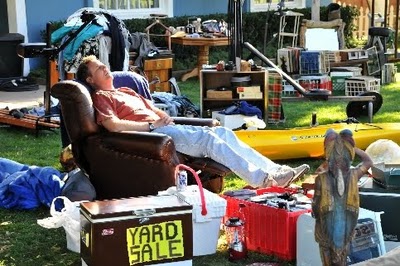 Based on a short story by Raymond Carver, Dan Rush’s directorial debut is a refreshingly alternative role for the usually type-cast Will Ferrell. Here, he plays a recovering alcoholic who relapses and subsequently loses his wife, his job and indeed his house as his ex leaves town, locking him outside with all of his possessions.

The rest of the movie sees Ferrell’s character Nick continue his drinking binge, living amidst the eclectic debris of his former life, literally, as he takes up residence on his front lawn. It’s an intriguing set up, and one that would lend itself well to a more low key, subtle and indeed less Hollywood approach, but Rush manages to piece together a movie that whilst emotively touching in places and consistently affable, is a little too sentimentally Hollywood for its own good.

Still, there is plenty to enjoy here as we watch his perfectly metaphorical stalled life reluctantly collide with others almost purely by accident. The consistently lovely Rebecca Hall (Vicky Cristina Barcelona, The Town) plays recently moved-in and pregnant neighbour Samantha, who is something of a lost soul trying to find affirmation in her lifestyle choices. Then there’s his promiscuous and kinky neighbours, former high school admirer Delilah (Laura Dern of Jurassic Park), and lonely, bullied school kid Kenny (Christopher Jordan Wallace), who latches onto Nick for baseball advice and ends up befriending him. They all act as the catalyst for his gradual recovery and acceptance for the mistakes he has made and the next steps he needs to take. Each neighbour allowing him to reflect upon his own successes and failures.

Nick’s stubborn initial refusal to accept the consequences of his mistakes creates an excuse for the film-makers to investigate a microcosm of the American condition. From the secrets behind closed doors, to the cookie-cutter, white picket fenced lives that are still so distressingly coveted, Rush does an effective job of shining a tender light on some of the cracks in modern suburban lives whilst never seeming condescending or overtly preachy. Indeed, the ending isn’t as objectionally saccharine as one would fear.

In the end it’s the sort of movie that may be somewhat affecting and enjoyable while it lasts, but is ultimately rather forgettable and far too safe to herald too highly.Some are bound to rate it higher simply because for Will Ferrell it feels like an incredibly dark and serious movie, but in reality it’s actually fairly standard, lightweight Hollywood fluff.