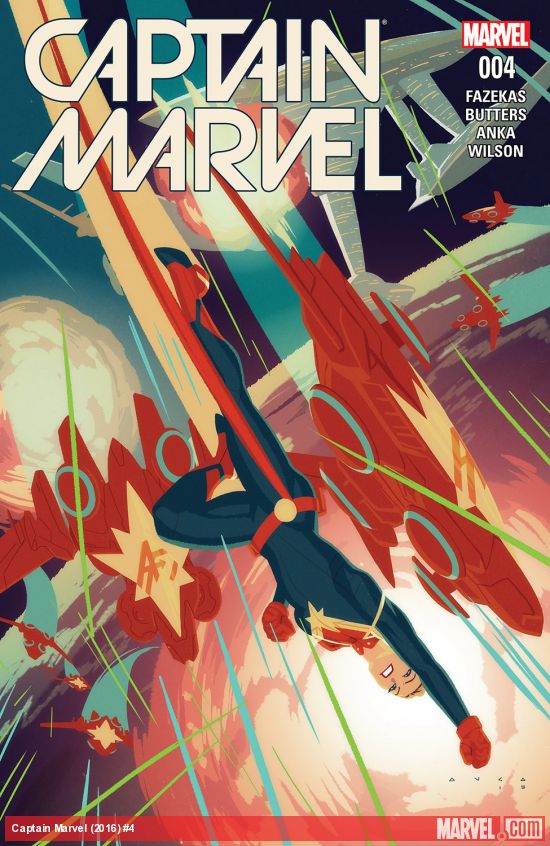 An unstoppable alien enemy. Superpowers on the fritz. A traitor hidden in her ranks. A literal target on her chest. Carol Danvers is in a heap of trouble, and Captain Marvel #4 is a series of last-ditch efforts to beat that trouble back into submission.

Every time you turn the page, Carol’s fully committing to yet another all-new, all-desperate plan to ward off an alien invasion. Imagine the climax of a generic action-adventure story: just when things look most dire, the plucky hero puts all her eggs in one unlikely basket, commits to a daring plan… which, somehow, happens to work.

Well, that’s not what happens here. 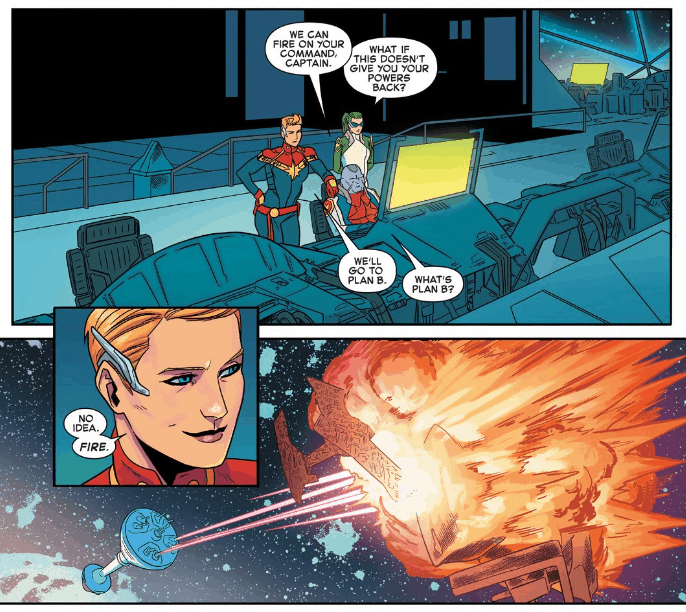 Blowing stuff up? Miraculously getting her powers back? Disarming the enemy with kindness? Going on a suicide mission? Taking advantage of a tactical error? Using the enemy’s weapons against them? Check, check, check.

Carol keeps quipping about “Plan B,” but seriously–we’re probably past Plan F by the end of this issue. 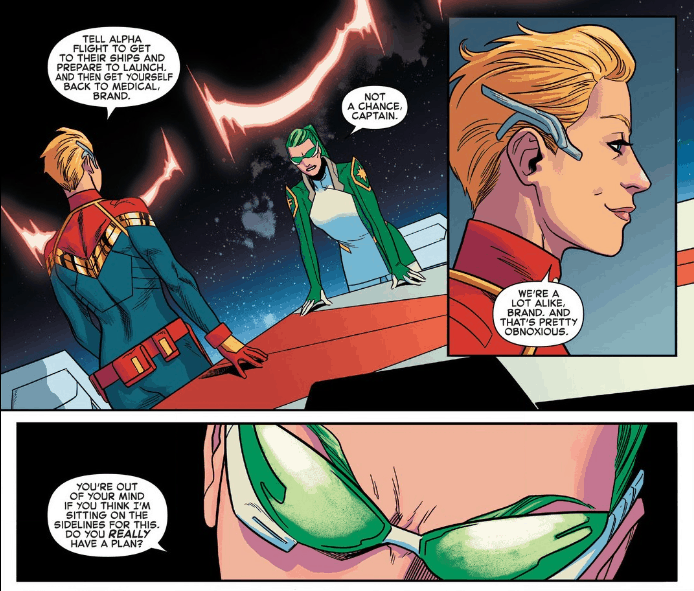 Which I think is kind of the point. This run’s big theme is that Carol has been put in a situation which she’s totally qualified for, but not totally comfortable with. As leader of Alpha Flight, she’s supposed to be a leader, an administrator, a diplomat… and yet she tends to be someone who, in her own words, likes to punch her problems in the face. Keeping a hands-on (fists-on?) hero like Carol inside a spaceship, during an apocalyptic space-battle? That’s not a situation that’s likely to stick.

To be fair, I think that the person who orchestrated this situation–Abigail Brand–knows exactly what she’s doing by sticking earth’s mightiest hero in a somewhat ill-fitting leadership position. And our Fazekas/Butters writing team also know exactly what they’re doing–if Carol’s heroic instinct is to externalize and physically confront her problems, they’re giving their hero an epic trial by making her problems both physically formidable and deeply personal.

The Satori are a ruthless, vengeful armada bent on wiping out anyone and everything Kree. So, while they’re the kind of external, physical threat that’s well in Carol’s wheelhouse, their motivation is also inherently tied to Carol’s history and identity–not just the symbol on her uniform, but the Kree legacy written into her DNA. Potentially, Fazekas and Butters are undertaking a provocative re-definition of Carol Danvers’ heroism: what shape will it have to take to win this particular battle? How many frantic, chaotic, last-ditch plans before she finds the kind of heroism that fits?

This is character development through chaos, and Kris Anka is also doing his best to make our heads spin–contrasting tense, static conversations on the Alpha Flight bridge with explosive, chaotic, sci-fi action on every other page.

Speaking of which, how do you represent a dynamic aerial action sequence on a two-dimensional comics page? This is an artistic problem I’ve been interested in ever since David Lopez did it pretty magnificently in Captain Marvel and the Carol Corps.

Here’s my thinking: on a movie screen, you have a camera moving in relation to flying objects–following a plane as it curves through the air, or tracking its movement on a straight line from left to right, for example. I’m not saying that filming an aerial action sequence is easy to do well–just that there’s a built-in visual language for doing it. Part of the thrill of watching a cinematic dogfight, or Spider-Man thwipping between buildings, or an absolutely gonzo extravaganza like this, is the exhilarating feeling that anything can happen, anything can move in any direction at any time. But you need smart camerawork and editing to make a coherent narrative out of all that potential chaos and freedom of movement.

See also  Wide World of Horror: 'Prowl' - the endgame of wanting to be conventional

So how do you do this on the comics page? In Captain Marvel and the Carol Corps, Lopez took an approach that I’d call cinematic: using perspective and framing to “track” the movement of the Corps from an imagined “camera” location, as if we were whipping our heads around to follow their 3D movement. 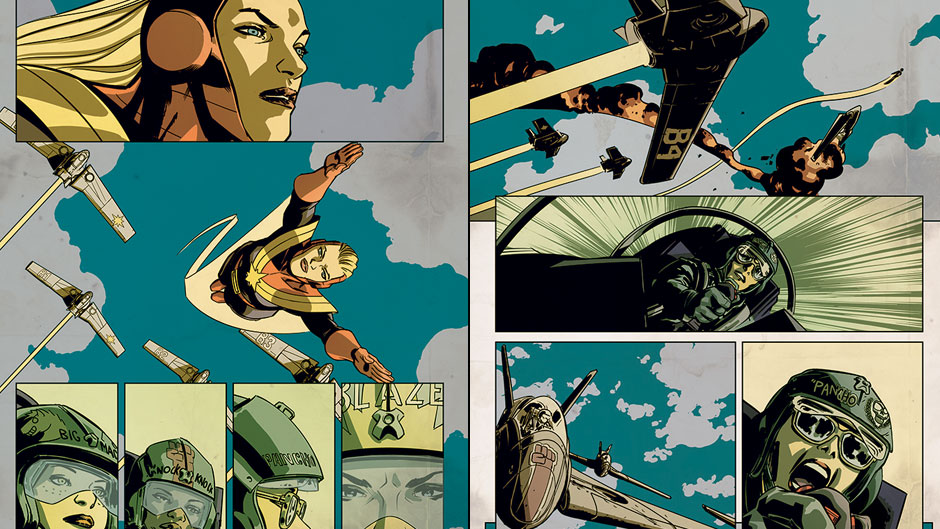 In contrast, Anka doesn’t stylistically imply movement like Lopez–he draws it right into each panel. For example, as Captain Marvel flies through space, she leaves a bright trail of energy behind her. Anka shows us the movement of each spacecraft in the same way–we see the beginning and end of each movement all at once.

Matthew Wilson’s distinctive color palette tells the story here, too, with bright blasts of energy standing out in vivid contrast against a blue-black void. Wilson uses specific shades for specific characters and objects so that we can easily perceive the path of each flying object. The overall impression is an intelligible chaos of kinetic and explosive energy–one of the best visual representations of Captain Marvel’s high-flying, energy-absorbing superpowers I’ve ever seen.

A few weeks ago, I was contrasting Annie Wu and Russell Dauterman’s contrasting approaches to drawing action: Wu’s use of rectangular, “cinematic” panels that imply intermediate action and movement in physical space, versus Dauterman’s strategy of drawing angular, dynamic movement that informs the physical shapes on the page.

See also  25 Days Of Christmas: My So-Called Life: “So-Called Angels” a timeless classic that will bring tears to your eyes

Captain Marvel and the Carol Corps, Kelly-Sue DeConnick’s Captain Marvel elegy, was all about expanding horizons, pushing onward, moving in new directions. Contrast that with the way that Fazekas and Butters have painted their Captain Marvel into a corner, tying up her past and future in a tense, chaotic knot, pushing and pulling her in several directions at once. Yup, that’s just like Anka draws this issue’s action: past and present, tension and dynamic movement, all tied up in one fiery instant.