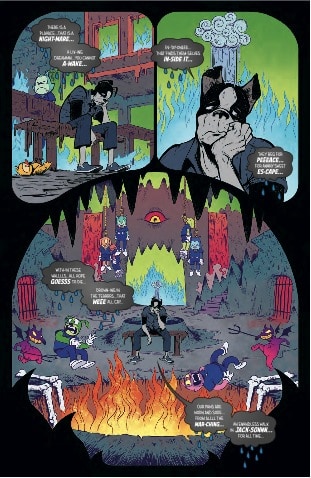 The tonal shift from the great first issue of Kennel Block Blues to this one isn’t extremely dramatic. There are still some really great, playful character names (making one wonder what other ones were thought of) and moments that writer Ryan Ferrier tickles the funny bone and shift the narrative forward. Drastic measures are taken in Kennel Block Blues #2, as Sugar initiates a prison, er, kennel break, with the help of Oliver, Charlie, Fluppers and Frisky.

The immediate notable difference from the first issue is the changes made with Oliver’s fantasy realm. The songs he sings and the images that present themselves are a lot darker, mundane and downright nightmare inducing; kind of matching up to par with the situation that Oliver finds himself in. Oliver can no longer ignore the harsh reality and pressure that is being put on by the cats. Now that Cosmo has been taken away by the mysterious black smoke security spirits, straight from the island of Lost, Sugar isn’t waiting around for others to take action.

Daniel Bayliss continues his playful nature with some really well drawn, expressive faces and really inventive framework. Bayliss does a solid job at drawing each of the now known characters, expressing their personality with detailed line work. From Sugar’s stern, serious nature, Oliver’s worried, concerned, mostly sedated emotions, to Charlie’s hyper-expressive and kind of oblivious but lovable wide jowl, show Bayliss’s comfort and knowledge on each of the characters drawn.

There is a particular sequence that stands out in which Sugar and Oliver sift through an array of books at the kennel library in the hopes of finding a supposed map that the Alpha dog Chester has slipped in amongst one of them. At first, as they walk and talk, the books on the shelves act as dividers to the frames of action, concealing them between one another over a two page spread. And then, after they encounter the lizard Bubber, Oliver and Sugar are now contained within the frames that have turned into the shapes of the books, elevating their tense escape from the library and cross cut with the hilarious side-plot of Flubbers and Charlie doing their part to ensure the escape proceeds forward. 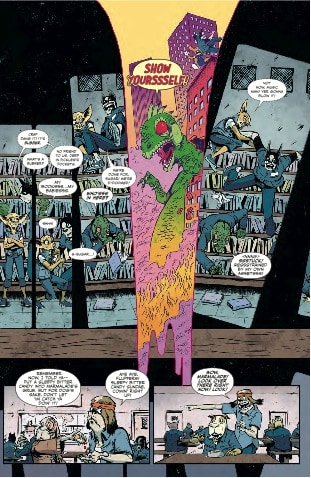 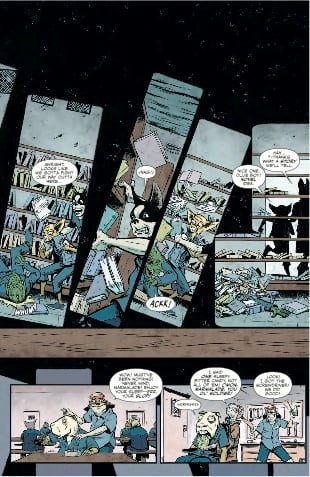 Adam Metcalfe’s colours heighten the pencil work of Bayliss by really providing a sense of texture to the fur of the dogs, cats, and various animals. His colours become a bit more muted during the night sequence in which the kennel break is in full swing, showing a well-handled understanding of lighting that stands out even more when compared to the colourful images from hell that peek out from Oliver’s fantasy realm. Letterer Colin Bell does a great job of spacing out all the dialogue amongst the busy frames that aids in making this issue flow quite nicely. He also has some well-used and well-placed sound effects during the last quarter of the issue that culminates amongst Ferrier, Bayliss, and Metcalfe’s work in making the claustrophobic sequence even more intense.

Kennel Block Blues #2 ends on yet another cliffhanger that will make things very interesting for the kennel prisoners. The creative team continues to present a very playful and funny prison drama, parodying the genre in all the right ways so far. Switching Oliver’s fantasy sequences to more morose images was rather unexpected but definitely works with the ante going up and the action moving forward in this issue.