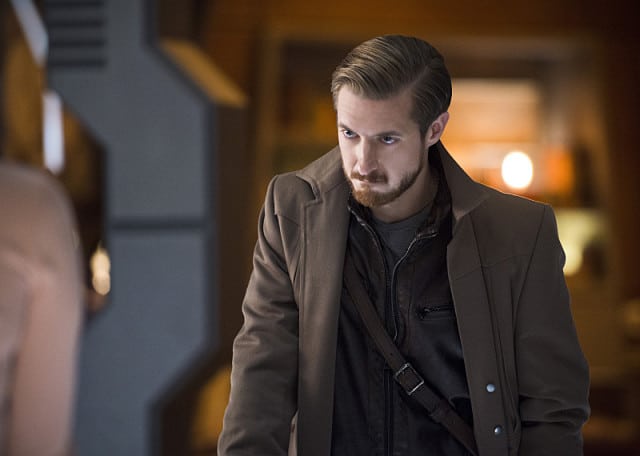 And…another one bites the dust. There’s been a death in both episodes of Legends of Tomorrow so far, and while I don’t expect the trend to continue, it signifies the show’s willingness to take risks and set up stakes that matter. My suggestion in reviewing “Pilot, Part 1” that eight heroes was simply too many and Hawkgirl and Hawkman were among the most expendable on a team level feels faintly prescient, since Carter aka Hawman does pass on in this episode, slain by a dagger in the gut from Vandal Savage. This is a deft development from the showrunners ,since it serves the dual purpose of streamlining the team a little, and giving the Legends, particularly Kendra, personal incentive to take Savage down. Saving the future and the world is a noble goal, but has a tendency to feel a little abstract when bullets are flying, given that all the team members are volunteers. Ciara Renée’s Kendra really has a chance to shine in this episode, vividly portraying attraction, confusion, and ultimately, grief and terrible regret at the death of the man she was just getting to know again.

The episode as a whole, despite the tragic event, has an energy and surety that was lacking in the first episode; this is the Legends of Tomorrow we showed up for. Gunfights, fireball-throwing, terrible 70’s fashion, and locale-hopping abounds. The team stays in the 70’s this time, visiting college-town America (amusingly called “Ivy Town”) and the fjords of Norway, where things open with a bang as the team heads off to a gathering of criminals and terrorists meeting with arms dealers. Things quickly escalate into a genuinely extraordinary group battle scene. Incredibly deft filming, action happening so quickly it’s almost a blur, and a camera that swirls to highlight the individual fighting gifts and styles of the Legends makes for kinetic, high-budget magic. As filming technology and production values climb, there’s increasing potential for TV shows to take advantage in groundbreaking ways, and Legends of Tomorrow showcases that potential.

Which is to say, it’s fun: there’s something immensely satisfying about watching the White Canary wield dual batons to decisively take down multiple armed men, Captain Cold and Heat Wave icing and burning their enemies with enthusiastic verve, and Firestorm shooting blasts of fire a hundred feet through the air, not to mention the rest of the team. You wanted a small-screen superhero team, your appetite having been whetted by the Avengers movies? You got it. “Pilot, Pt. 2” really highlights the incredible abilities of Firestorm in particular as he sucks up the nuclear energy of an entire warhead. The episode hints that he may very well be the team member with the greatest raw power.

Rip Hunter’s role also solidifies here – but not as the rapscallion, short-tempered pseudo-leader he presented himself to be. Rather, Rip is the compassionate one, the voice of comfort, and yes, at the end of the day, the one who unites them all. There’s an immense tenderness to Rip as he leans over Kendra in her harsh grief, comforting her, undaunted by the intensity of her emotion. In that moment, the eons that he has lived through in his time-jumping are written on his face, all the pain and suffering he’s seen – props to Arthur Darvill for carrying off the scene so beautifully.  Similarly, Rip is able to offer Professor Stein (in both his older and younger forms) real guidance and wisdom, with it coming the realization that Rip has lived to see much of humanity rise and fall, and gained a depth of knowledge in the process.

So when Rip turns to face the team at the end, as they finally coalesce in a combination of revenge for Carter and the desire for their lives to matter, and unilaterally look to his guidance, it means something. And seeing confidence and certainty fill the adventurer’s face, and the guarded cynicism fall away from this man who has loved and lost, fought and run, alone for much of his life, it is truly like seeing the birth of a Legend.

An underlying theme of Legends of Tomorrow is that of redemption – how humans can redeem themselves in the time they have, how the team in particular can move beyond past mistakes and past lives – and Rip personifies it in the episode-ending close-up of his face.

Rip Hunter explains an important limitation of time travel when he tells the team it’s impossible to go back and change events in which they themselves participated.

Is it blasphemy to say that The Atom is sort of like bargain-basement Ant-Man? Yes?

There is not a chance in hell I am not including Barney Stinson’s “legen-dairy” pun in one of these reviews at some point.

“Time is like cement: it takes time to become permanent.”

“I’ll have you know that I was researching alpha particles when you were eating crayons.”