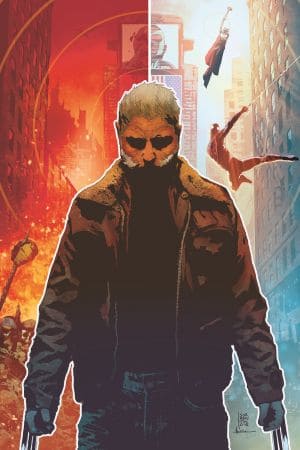 “Old Man Logan” was a story arc, written by Mark Millar and drawn by Steve McNiven, set in the distant future of the Marvel Universe where the villains teamed up and killed most of the heroes setting a dystopian landscape called the Wastelands. Wolverine is a pacifist until his family is slaughtered by the incestuous Hulk gang, and he pops the claws one last time. A kind of spiritual successor to this story was Brian Michael Bendis and Andrea Sorrentino’s Old Man Logan miniseries and Secret Wars tie-in, which featured breathtaking scenery and creative fight choreography, but suffered from mega decompression and  was just a basic Wolverine goes on a road trip around Battleworld and somehow makes it into the All-New, All-Different Marvel. With Sorrentino staying on art and Marcelo Maiolo on colors, Jeff Lemire takes the character another step forward in Old Man Logan #1, which begins as a middle of the road fish out of water, amnesiac story with extra violence and ends up transforming into a high powered revenge thriller by the final page thanks to a touching flashback scene featuring Wolverine and his son Scotty. (Still wrapping my head around Wolverine naming his son after Cyclops.)

Even if amnesia is a beyond overused in superhero comics, Sorrentino and Maiolo add a fresh touch to Wolverine feeling disoriented in the middle of Times Square at the beginning of Old Man Logan #1 as he gradually goes from not knowing his own name to remembering what happened to his family and obviously fact the fact that he is a mutant with adamantium claws and healing powers. Sorrentino tilts the panel as the naked Wolverine stands agape in Times Square, and Cory Petit uses bold lettering to show the surprising effect of him taking a taser blast without reacting at all and throwing a fire escape at police officer. He uses his signature square inset panels to hint at little events that have big consequences, like Wolverine taking bullet or a cop reaching for his gun. The gun isn’t there because “Oh look, this is a Wolverine. There must be an action scene every three pages.”, but as an agent of memory  as the plot of “Old Man Logan” bleeds red in Sorrentino and Maiolo’s first double page spread with their depiction of Wolverine acting as the epitome of agony. Plus Lemire doesn’t take a whole damn issue to go from zero to a few memories. 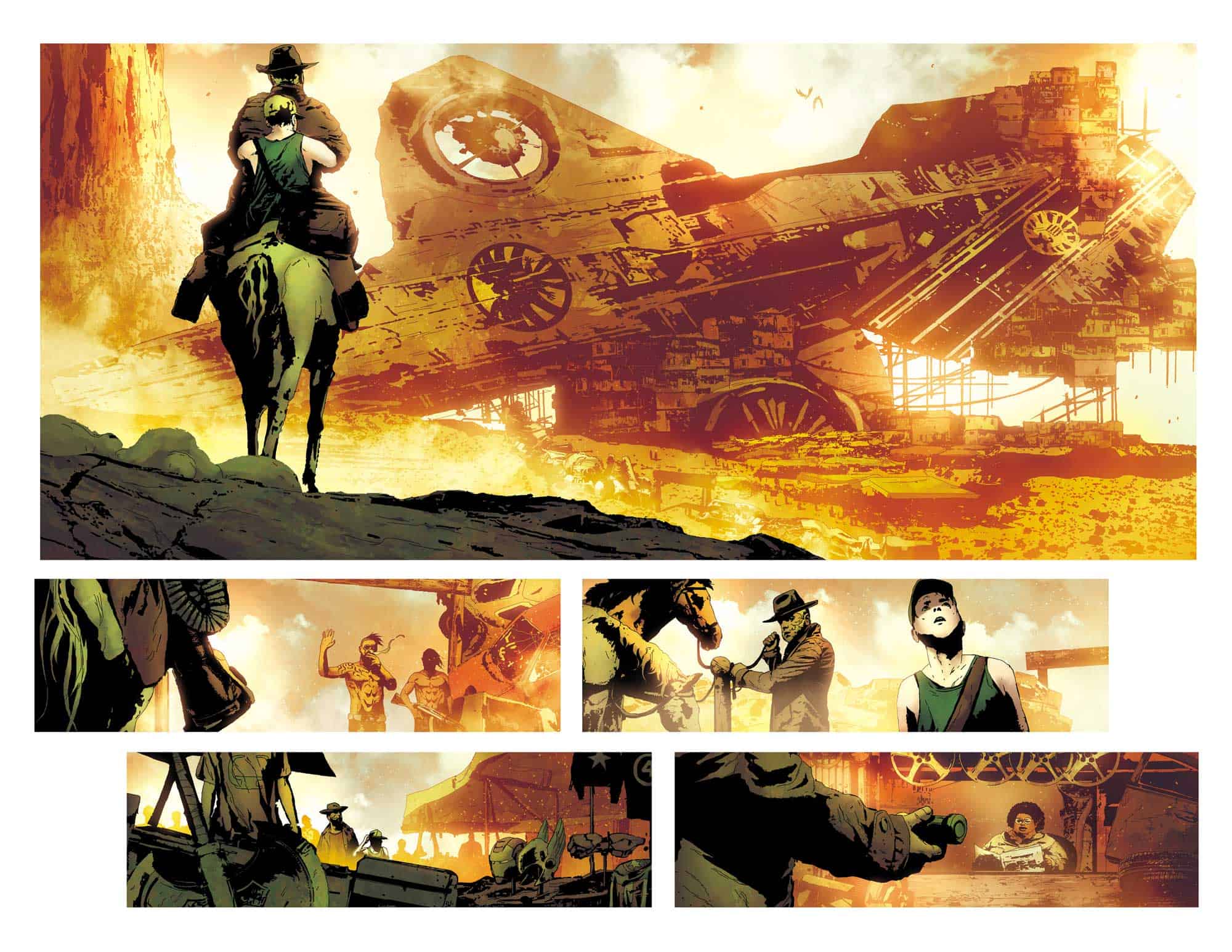 Wolverine’s fight against Black Butcher is a cold blooded type of violence, but Lemire and Sorrentino keep Old Man Logan #1 from being a canonical version of Violent Anti-Hero Made Popular in the 1990s Kills the Marvel Universe with the earlier mentioned flashback scene. Sorrentino nails the used future aesthetic of the Wastelands and offers a wide screen panel of Wolverine and Scotty on horseback with a downed Helicarrier in the background, which is basically an audition for him to draw a Rey solo comic. There’s a country fried feel to Wolverine’s dialogue as he barters for goods that turns tense as Black Butcher threatens him and taunts him with his past life as a superhero. Maiolo shows the rage building up in him as he momentarily abandons his usual desert swept palette for the red of rage around Wolverine’s fist. But he doesn’t fight back, and his own heroic legacy is questioned by his son, who wonders why he never fights back. And this line is the impetus for the adrenaline pumping third act of Old Man Logan #1. Lemire’s pacing is solid even if the opening pages seem cliched, and the final page of the issues sets up a plethora of storytelling possibilities.

Old Man Logan #1 is the extremely dark mirror to the classic “Days of Future Past” storyline as Wolverine doesn’t sheathe his claws and abandon violence to bring hope to mutants and the world, but decides to take revenge on the people responsible for destroying his family beginning with a Z-level villain, who hit his son. He is giving into his primal nature, and this could have consequences for his future and the Marvel Universe’s if some his plans come to fruition. Jeff Lemire and Andrea Sorrentino say, “No more nice Wolverine!” and go from almost lethargy to wicked revenge at the touch of a dial. Having Wolverine back as a killer (And not under any Hand mojo or mind control.) is a risky move, and hopefully Lemire and Sorrentino will continue to show the psychological effects of his actions and not just turn him into the aging Canadian superhero from an alternate future Jason Voorhees.