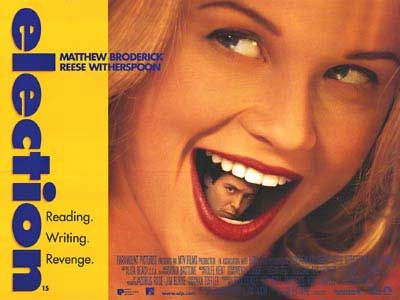 I’ve always been a big fan of Alexander Payne‘s dark comedy Election, and in my opinion, it is one of the best comedies of the 90’s; The film was adapted from a 1998 novel of the same title by Tom Perrotta and satirizes both suburban high school life and politics. The film received an Academy Award nomination for Best Adapted Screenplay, a Golden Globe nomination for Witherspoon in the Best Actress category, and the Independent Spirit Award for Best Film in 1999. While it failed to become a major box office success, it has since found somewhat of a cult following. Following its release, the movie was ranked #61 on Bravo’s 100 Funniest Movies and #9 on Entertainment Weekly’s list of the 50 Best High School Movies.

A six-minute original ending sequence has found its way online, and although the quality isn’t great, it still makes an interesting watch. Also I recommend not watching this unless you have already seen the film, and if you haven’t seen the film, I highly recommend checking it out.