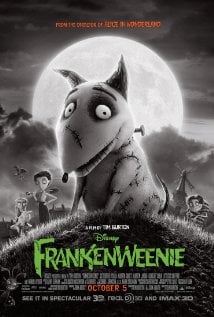 A feature-length, black and white 3-D animated expansion of his original black and white live action short film, Frankenweenie is an amazing technical achievement by Tim Burton. The film looks fantastic and for once the 3-D isn’t just an excuse for Hollywood to dip their sticky fingers into your wallet. Rather than constantly thrusting objects into into your face like most 3-D horror films, Burton uses the technology to create a film environment to draw in the audience, apparently taking his cue from Henry Selick’s immersive animated masterpiece Coraline. Characters are blocked like in a theatre piece, moving from upstage to downstage as necessary. In the film’s best sequence, Burton draws the audience into the middle of a burning building, pulling the audience into harm’s way rather than throwing danger at them.

Sadly, the story and characters featured in the film are nowhere near as interesting as the way that they are presented. Like Burton’s original 1984 short film, Frankenweenie is built around young filmmaker, and budding science nerd, Victor Frankenstein (Charlie Tahan), who makes 3-D films starring his dog Sparky. Forced by his father (Martin Short) to play baseball, Victor improbably hits a home-run off ace pitcher Toshiaki (James Hiroyuki Liao) only for tragedy to strike when Sparky runs across the street to retrieve and return the ball. It feels like a Burton humble-brag or an Emo Williams joke, “I played baseball when I was a kid. Hit a home run in my first at-bat. While I was running the bases and celebrating, my dog ran to get the ball and was run over by a car. I never played again.”

After being taught by his science teacher Mr. Rzykruski (Martin Landau channelling Vincent Price) how jolts of electricity can make a dead frog twitch, Victor digs up Sparky from the New Holland Pet Cemetery, stitches him back together, adds square bolt screws in his neck to conduct the electricity and builds a platform to harness the lightning and zap Sparky back from the dead.

It’s a good start and Frankenweenie does have some interesting ideas. Rather than having the traditional nerd vs. jock, mean girl vs. smart girl dynamic, everyone in Victor’s class is a weird outsider. The best athlete is the Japanese kid Toshiaki. The other kids in the class include the fat kid Bob (Robert Capron), tall weirdo Nassor (Martin Short channeling Bela Lugosi), the hunchbacked kid Edgar ‘E’ Gore (Atticus Shaffer), the spooky, blonde occult girl (Catherine O’Hara) and the goth girl Elsa Van Helsing (Winona Ryder). Underlining how strange the class is, everyone in it (with the possible exception of Elsa) wants to win the science fair. When Edgar finds out that Victor has reanimated Sparky, it leads to a science fair arms monster race with everyone using Victor’s idea to bring their own experiment to life. Unfortunately, this leads to psychic cat Mr. Whiskers (who has prophetic poos) being genetically combined with a dead bat – turning the film’s most interesting character into a snarling Christopher Lee homage. That, in a microcosm, is the film’s problem. It forsakes originality to quote other, better films. There is nothing wrong with a film quote, but Frankenweenie is a film quote machine. At first, the allusions (Mr. Rzykruski is Vincent Price! Elsa’s dog is the Bride of Frankenstein! Edgar’s dead fish is The Invisible Man crossed with Piranha!) are amusing diversions, but as the film accelerates to a climax, the film quotes also accelerate until every scene is an allusion to some other film and Frankenweenie becomes nothing more than a chain of film quotes one after the other. (Godzilla! Gamera! The Mummy! The Fly! Gremlins! Ben! Dracula! Jurassic Park! C.H.U.D.! Frankenstein! House of Dracula! Dracula vs. Frankenstein! The Blob!) The Cabin in the Woods had a similar final reel homage eruption problem, but managed to harness the chaos to deepen its original story. Frankenweenie, on the other hand, sacrifices character development and originality on the altar of homage.

Symptomatic of this is casting Winona Ryder as the teenage Elsa Van Helsing seemingly just so that Winona can quote her own lines from Beetlejuice.

The result is a film that feels like a love letter to classic monster movies as written by Chris Farley. “Remember that time when I made truly original, funny horror films with characters that we had never seen before?” Yeah, Tim we do. Maybe next time you could make one rather than reminding us of what you used to make and what inspired you to make them.